A New Air Force One 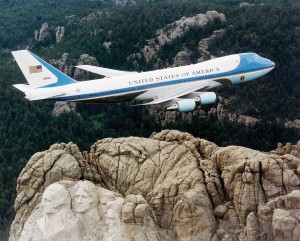 Twenty two years ago today, on August 23, 1990, President George H.W. Bush and the US Air Force took delivery of the new “Air Force One” — or, in military parlance, the VC-25A.  Fittingly, this latest model of “Air Force One” is a uniquely American design — a Boeing 747-200B Jumbo Jet with its distinctive “hump back” top deck.  Two new VC-25As replaced the USAF’s two aging Boeing 707 aircraft, 26000 and 27000, aircraft that had been serving on Presidential duty since the Kennedy Administration of the early 1960s.  Today, Air Force One, wherever it flies, serves as a grand symbol of state, representing the USA around the world.  However, it wasn’t until 1953 that the title “Air Force One” came into being — and even then, surprisingly, it only came about as a result of a screw-up involving Air Traffic Control and Eastern Airlines. 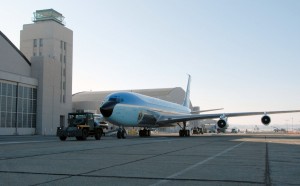 The First Air Force One

Although many people are familiar with how President Franklin Delano Roosevelt was the first to receive a dedicated aircraft — a Consolidated C-87 Liberator Express dubbed the “Guess Where II” — he wouldn’t fly on it.  Too visually similar to a B-24 Liberator bomber, it was deemed a security issue for the President to fly on anything that looked like a war machine.  The US Army Air Forces therefore offered a second option to use as a dedicated presidential aircraft, a C-54 Skymaster that was nicknamed “the Sacred Cow”.  The President was pleased with the plane and flew it several times, yet it didn’t carry the moniker Air Force One.  Nor did President Harry Truman’s dedicated airplane, a C-118 Liftmaster that was called the “Independence” after Truman’s home town in Missouri. 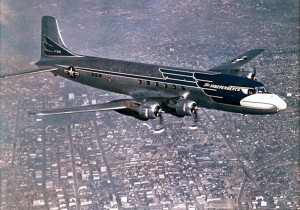 In fact, the terms, “Air Force One” were not used until President Dwight D. Eisenhower was flying aboard his dedicated executive aircraft, one of two Lockheed VC-121E Constellations that were nicknamed “Columbine II” and “Columbine III” (after the state flower of Colorado at Mrs. Eisenhower’s direction).  Even then, it was only due to an air traffic control mix-up that the unique White House moniker was adopted.

In 1953, Eastern Airlines Flight 8610 happened across the same airspace as Air Force 8610, the assigned call sign for the President’s flight that day.  One can imagine the confusion on the radio might have gone something like this:

“Center, be advised Air Force 8610 is requesting a descent, not a climb at this time.”

“New York Center, Air Force 8610, we would like to request a different call sign at this time.”

It wasn’t long afterward that the Executive Branch issued a new policy that resulted in the singular use of the unique name, “Air Force One” for all future USAF flights with the President on board — no matter what the airplane.  The name was likewise limited by the FAA to just the President’s airplane.  Likewise, the US Marines, which transports the President by helicopter to and from the White House to Andrews AFB or Camp David, is called “Marine One” while the President is aboard.  And the US Navy?  Yes, even the US Navy has carried a President on an aircraft, though to our knowledge only once when President George W. Bush flew as copilot on a  S-3B Viking for a landing on the aircraft carrier USS Abraham Lincoln (CVN-72) — that aircraft was dubbed, “Navy One”. 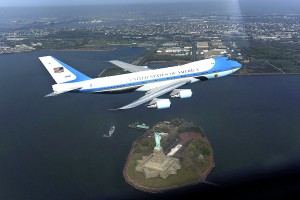 Air Force One over Manhattan — an incident that panicked some New Yorkers who thought they were watching a repeat of the September 11 attacks; it turned out to be a photo-op ordered by the Obama White House that was not well enough publicized. Photo Credit: USAF

The Next Air Force One

The USAF expects that the current VC-25A (Boeing 747-200B) Air Force One airplanes will last until at least 2017, when, in accordance with a 2009 request for proposal, a new aircraft will replace the current one.  EADS, in the wake of the USAF Airbus vs. Boeing tanker bid problems, has announced that it will not bid with a European manufactured aircraft — and it is clear that the award would have likely gone to an American-built airplane anyway.  Therefore, it is expected that the USAF will select either a Boeing 747–8 or Boeing 787 Dreamliner as the next Air Force One.  Most probably, the Dreamliner has the inside track, but then again, the distinctive 747 Jumbo Jet “hump back” may yet carry the day.  Put simply, in many ways, the 747 represents the “look” of American commercial aviation.

The interior design of Air Force One has traditionally been the prerogative of the First Lady (the President’s wife), though the overall design was originally authored by famed industrial designed Raymond Loewy (a Frenchman living in the USA whose designs included the streamlining of locomotives and several classic automotive designs, as well as the well-loved Le Creuset cookware line and even the USCG orange stripe logo).  When the USAF acquired the Boeing 707 aircraft 26000 and 27000, the interior design work was overseen by Jackie Kennedy.  Her sophisticated New England style tastes showed through in everything from the carpets and drapes to the bathroom vanity mirrors and the President’s armchair.  Likewise, when the new VC-25A (Boeing 747) aircraft were acquired, the interior designs were overseen by First Lady Nancy Reagan who added a touch of the American West to the layout and design elements.  The next Air Force One will likely be designed by the next First Lady, presumably either Michelle Obama (if the President is reelected) or Mitt Romney’s wife, Ann.  Thus, it seems that — at least from an aviation point of view — this coming election is more critical than ever for the future of America.  Either way, however, it is likely that Midwestern or Great Lakes theme might well be selected — either Chicago, Illinois, or the Detroit area of Michigan — whatever that means?

What was the smallest aircraft type (make and model) ever acquired by the USAF to serve in the role of Air Force One?  Did the President ever use it?


Anyone know which date in 1953 the near-collision happened? My dad started as Exec Officer of the White House Signal Agency in October 1953. Very curious. Thanks for any help in identifying the exact date of the incident!