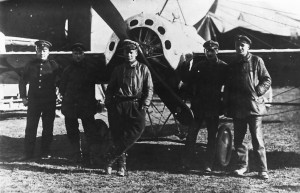 Oswald Boelcke with his Fokker Eindecker along with ground crew.

“I fly close to my man, aim well and then of course he falls down.” — Oswald Boelcke

On this date in aviation history in the year 1915, Lt. Oswald Boelcke, flying in a Fokker Eindecker E.I, scored the first schychronized machine gun victory (with the Fokker interrupter gear) over France during the Great War, shooting down a British Bristol Biplane.  It was his second kill.  Boelcke would go on to become an ace, yet his true claim to fame rested less on the number of his opponents he shot down and more on his leadership abilities.  From his experience, he developed the Dicta Boelcke, rules of aerial combat that still remain mostly valid even today, 97 years later.  He inspired a generation of young pilots, including the famous Max Immelmann, Kurt Wintgens, and Baron Manfred von Richthofen — men who would also become great aces.

Eight rules of air combat in German with English translations:

4. Lasse den Gegner nicht aus den Augen.
Go after the opponent from where he cannot see you.

5. In jeglicher Form des Angriffs ist eine Annäherung an den Gegner von hinten erforderlich.
In any form of attack, it is required to approach the enemy from behind.

6. Wenn Dich der Gegner im Sturzflug angreift, versuche nicht, dem Angriff auszuweichen, sondern wende Dich dem Angreifer zu.
If you are attacked by an opponent diving on you from above, do not try to dodge the attack, but turn into and toward the attacker.

8. Für Staffeln: Greife prinzipiell nur in Gruppen von 4 bis 6 an. Wenn sich der Kampf in lauter Einzelgefechte versprengt, achte darauf, dass sich nicht viele Kameraden auf einen Gegner stürzen.
For squadrons:  The principle method of attack is to fly in groups of four to six aircraft.  When the fight scatters into single battles, make sure that not too many comrades fall upon any single opponent. 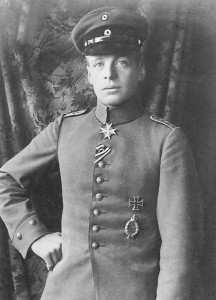 The Dicta Boelcke have been translated and mistranslated many times — variations also exist both in German and English.  Boelcke himself may have authored a few versions.  Nonetheless, the core principles are solid — they presage the more complex battles that were yet to come in the Great War and then again in World War II and beyond into the jet age.  Luftwaffe pilots studied the Dicta Boelcke as well and the lessons were applied, giving rise to the Finger Four combat formation of two pairs of aircraft flying and fighting together.

The Dicta remain a part of virtually every fighter pilot’s training as well.  The reason for that is that while one could conceivably study other great aces like Baron Manfred von Richthofen (the Red Baron), little true lessons of aerial combat can be learned from those stories.  However, with the Dicta Boelcke, the way not only to survive but also to become an ace is laid out in eight simple rules that are easy to learn and apply.

The so-called “cult following of aces” has been a primary fixture of aviation history since the First World War. Although it makes sense to rank pilots based on their abilities — and shooting down the enemy became the preferred measuring stick — in actual fact, the rise of the term “ace” and of the popularity of the ace pilots arose more as a reaction to the senseless, mechanical carnage of battle of the infantry in the trench warfare of that era. Hundreds of thousands of men were slaughtered in pointless offensives — gunned down by the new invention of the machine gun. Seeking a way to preserve a positive public relations front, the leadership of France, Germany and England created the concept of the ace pilot and expended great energy in publishing their. This personalized glory and individual triumph despite the horrific reality of death on a mass scale. Looking ahead, one can only wonder whether the concept of aces will remain even remotely relevant in today’s modern age of drones, satellites and remotely guided missiles.