On this date in aviation history in 1930, an 18-year old pilot named Eddie August Henry Schneider set three aviation records, along the way traversing America twice — once from the east coast to the west coast and then coming back again.  At age 15, Eddie had taken his first flight (during a trip to Germany) and then by age 16 had become the youngest certified commercial pilot in America.  Never the underachiever, Eddie was also the youngest certified airplane mechanic in the USA.  Despite having a total flight time of just 275 hours, it came as little surprise to his family and friends when on August 14, 1930, Eddie departed from Westfield, New Jersey, heading west on a cross-country flight — quite literally.  Eddie was flying his red Cessna Model AW, number C9092, that he had nicknamed  “Kangaroo”.  The plane was powered by a seven-cylinder 125 hp Warner Scarab engine.  Eleven days later and with an average ground speed of approximately 110 mph, he completed his record flight, arriving back on the east coast.  A  crowd of 2,000 cheering spectators greeted him, yet Eddie walked over to his father and simply quipped, “Hello Pop, I made it.” 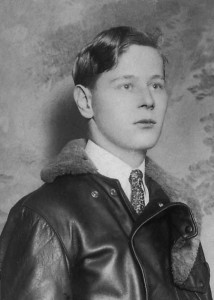 Eddie’s flight into the record books was extraordinary, whether for an 18-year old or for a more experienced pilot.  It was also exhausting both physically and mentally.  He had departed Westfield, New Jersey on August 14, 1930, not long after dawn — 5:55 am local time. From the outset, however, Eddie ran into difficulty.  Fog and rain forced him down at Huntington, Pennsylvania, and he had to stay over night while awaiting the weather to clear.  The following morning on August 15, 1930, he lifted off at 12:30 pm, flying to Columbus, Ohio, where he took on fuel and had a quick lunch before departing at 3:21 pm.  By nightfall, he reached St. Louis, Missouri, arriving at 7:05 pm local time (now one time zone, in CST).  The next day, August 16, 1930, he departed at 1:25 pm and reached Wichita, Kansas at 7:45 pm.  From there, on August 17, he continued to Santa Rosa, New Mexico, and then onward to Albuquerque, New Mexico, flying overnight to arrive on August 18, at 5:55 am MST.  He didn’t delay and pressed on for Los Angeles, California, arriving there on August 19, 1930.  On arrival, he realized he had set a new record with his flight across the country westward — it had taken a total of 29 hours and 55 minutes in the air and he had cut the standing record by 4 hours and 22 minutes.

Eddie Flies Back to New York

Just one and a half days later, not long after dawn on August 21, he took off to head back east.  The time was 6:17 am PST.  He took a direct route to Albuquerque, New Mexico, where he would spend the night — he arrived there at 3:13 pm MST.  He continued east on the reverse route of his earlier flight, again stopping overnight in Wichita, Kansas, which he navigated without a compass after the liquid ran out of the compass case.  After repairs, he departed and reached Columbus, Ohio, on August 23 for another overnight rest stop.  Knowing that he had little time to spare if he were challenge the standing record, he departed Columbus for a speed run across the mountains of Pennsylvania — yet he flew right into the heart of a raging storm.

Interviewed after the flight, Eddie commented that he knew he could fly along on a proven Air Mail route with relief fields and emergency beacons along the way.  Nonetheless, he ran into terrible weather near Pittsburgh and had to deviate 30 miles to the south.  Rejoining the route, he pressed on to Middletown, where he found that he had to fly on top of the clouds so as to avoid hitting any mountains.  In the clear weather above, he navigated by compass and time alone, racing along at altitude ahead of the following storm.  A break in the clouds confirmed his position at Stroudsburg, Pennsylvania, and from there he managed to fly on to arrive safely at Roosevelt Field, Long Island, New York, on August 25.  With his final push, he had cut 1 hour and 36 minutes from the previous west to east transcontinental record with a total flight time of just 27 hours and 19 minutes.

Combined, his total elapsed flight time from the East Coast to the West Coast and back was 57 hours and 14 minutes — even more impressive was that the flight had been accomplished over a span of just 11 days, 9 hours, 8 minutes.  He had set a record on both directions as well as a record for the combined round trip — three records in all.  Quickly, the mechanics pushed all of the aircraft on the field into hangars as the storm rolled in with high winds and lashing rain.  Eddie had truly been lucky in his flight, which he referred to as having 50-50 chance to “get through”. 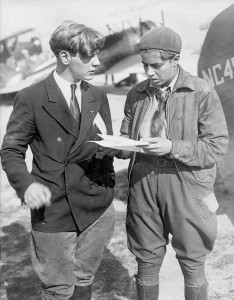 Instantly, Eddie Schneider was a nationwide celebrity.  The Associated Press carried the story of his flights and he was treated to excellent coverage in both the newspapers and over the radio.  Yet such records were not enough and Eddie.  On August 26, he took the time to make some deliveries of hand-carried letters that he had brought back from California.  Two were from the Mayor of Los Angeles to, respectively, both the Mayor of New York and the Mayor of Jersey City, New Jersey, Eddie’s home town.  The third letter was from the Elks Club of Los Angeles to their distant colleagues at the Elks Club of Jersey City.

Quickly, Eddie made some repairs to his airplane and then by the morning of August 27 he was off again, this time to Chicago to participate in the Ford National Reliability Air Tour.  Incredibly, the 1930 formula for the Air Tour involved a whirlwind 5,200 mile route that culminated in Detroit, Michigan — home town of Ford Motor Company.  Eddie didn’t even pause in his cross-country flying for rest and just dived into the competition.  The Air Tour was a month long, endurance test and when ended on October 1, 1930, Eddie had won the Air Tour’s Great Lakes Trophy as well, emerging victorious in the light plane category.  According to the New York Times, “Schneider beat out pilots who had a much better wingpower load ratio by sheer speed and good navigation.”

Looking back, maybe Eddie should have been awarded a fourth national record because over the course of a month and a half, Eddie had flown nearly 10,000 miles in his little Cessna Model AW, “Kangaroo”.  That’s an amazing feat for an 18 year old pilot who started the summer with 275 hours of flight time.

Eddie Schneider would continue to press the limits of what a young man could do.  Having turned 19 in October, he set about additional planes for record flights.  In December of 1930, Eddie announced that he would depart for a flight around the world the following June in 1931.  He planned to fly from Roosevelt Field to Paris and then continue onward to Berlin, Moscow, Alaska and then across the Bering Strait to Alaska, then Seattle with a final tirp across the nation back to New York.  The flight never took place, though the reasons why are lost to history.

What was the Yankee Squadron and how was Eddie Schneider involved?

Eddie Schneider flew with the Yankee Squadron, a mercenary unit with the Republican/Socialist side in the Spanish Civil War. Incompetently managed, poorly treated, constantly accused of disloyalty or insufficient socialist spirit. And, on top of that, never paid the full amount promised. But Eddie survived and escaped back to the United States (note: escaped from his employers, not the monarchists.)


Great story and quite amazing for anyone, especially someone so young.

I guess he must have had some wealthy backers too.


He must have had some family wealth. Remember that August 1930 is 11 months after the Great Depression began.