Francis K. McClean seemed a proper gentleman.  Born on February 1, 1876, he was the son of the respected Dr. Frank McClean, F.R.S., a recipient of a Gold Medal from the Royal Astronomical Society for his scientific endeavors.  Francis was properly educated in civil engineering and had been employed in British-governed India at the Indian Public Works Department.  Five years after his return to Britain in 1907, after work in several other businesses, he was suddenly afflicted with the addiction of aviation.  On August 10, 1912, exactly 100 years ago today, McClean climbed into the cockpit of his Short “hydro-plane” for a very special flight.  With a burst of power, he lifted the plane’s pontoons off the water and turned to fly westward up the Thames Estuary toward London.  He had one goal in mind — to fly his airplane under the spans of every one of the city’s bridges, including famous Tower Bridge. 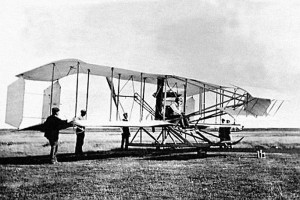 McClean’s fall into the clutches of aviation madness began with a first flight aloft in a balloon along with noted British aeronaut Griffith Brewer.  Instantly smitten with a new love of flight, a few short months later he accompanied Brewer as assistant in the Gordon-Bennet Races.  He piloted his own balloon in the next year’s competition in 1908.  That same year at Le Mans, France, he discovered the joys of powered flight when he took a ride with none other than Wilbur Wright.  Soon, he used his respected status to gain an elected committee membership in the Aero Club of Great Britain (in 1910, the Aero Club received the honor of the Monarchy’s favor as the Royal Aero Club).  That same year, he received Pilot Certificate No. 21 in Britain, flying Short biplanes.

Yet on a fine Saturday in 1912, McClean seemingly shed all respectability and his normally British gentlemanly manner with his desire to tackle the bridges of London.  Without so much as a practice flight, he simply took off from Harty Ferry in Sheppey — it was nearly 60 kilometers up the Thames to London, a sizable distance for a 1912 era airplane.  On arrival, he aimed his Short hydro-plane at the Tower Bridge and guided his plane between its the two levels, clearing the spans between the twin towers easily.  Then he nosed over and headed toward London Bridge, a considerably more difficult challenge. 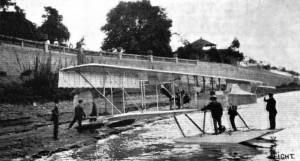 Skimming low, he had to go beneath the span.  There wasn’t much of a gap overhead, but he held the plane hard to the water, as close as he dared, and flew on through.  After that experience, which was somewhat frightful, he decided to land on the water and motor under the remaining bridges that crossed the Thames.  Having achieved that, he pushed the power back on and lifted off the water, secure in the knowledge that he had made history — albeit in a rather dubious way.

The Royal Aero Club, despite his status as an elected committee member, immediately expressed its disapproval and in particularly harsh terms.  Yet what could they do?  He was an honored member from their very own senior most ranks and well-liked.  Still, he had set a poor example for the English nation, itself just discovering the flowering of aviation, as well as writing a black mark down for others considering attendance to one of the many flight schools that were popping up at Hendon and Eastchurch.  In McClean’s own words, he had also caused “considerable displeasure in high police circles.” 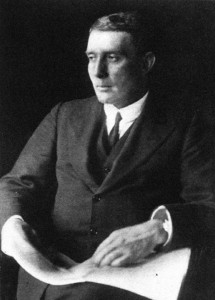 Was it madness or just a case of the youthful desire to undertake just that one exploit for the sake of it?  In later years, McClean would claim that the act was a protest against the British government for it’s failure to fully embrace aviation.  It was hard to say what the real reasons were, but one thing is certain, Francis McClean would go on to a distinguished career in aviation, gaining a commission in the Great War and running a flight school in Eastchurch.  In 1923 he entered the winning aircraft in the inaugural Grosvenor Challenge Cup Race, a Sopwith Gnu in the hands of pilot S/L. W. H. Longton.  In 1926, his bridge exploits forgiven, he would be knighted by the King for his contributions to British aviation.  McClean went on to serve in the officership of the Royal Aero Club for the next nearly five decades, twice as its chairman.

It seemed that whatever aviation madness had set upon him, the flight under the bridges cured him — at least nearly so.  Or maybe flying between the spans of the Tower Bridge was just the perfectly British thing to do.  In any case, McClean became a fixture at almost every British and international aviation meet in the following decades, either arriving by airplane or driving up in his trademark white Rolls Royce.

Yes, it seems he was cured indeed of the affliction of aviation.

If you are wondering whether anyone else has ever flown between the spans of the Tower Bridge, the answer is YES —  three other times to our knowledge (though not yet during the Olympics this year — don’t take this as incitement, by the way, because there are rings hanging between the spans that would prevent success anyway…).  One memorable flight was accomplished by an RAF pilot, Flight Lieutenant Alan Pollock of No. 1(F) Squadron.  Pollock flew through in a Hawker Hunter FGA.9 jet on April 5, 1968, after buzzing Parliament three times and beating up a few airfields while flying inverted.  He returned to RAF West Raynham confident that he was flying his last flight — for good measure he buzzed a few more fields on the way home, also inverted.  He would later claim his actions were a protest for a cancelled air show that was to celebrate the 50th anniversary of the founding of the RAF.  He was arrested upon landing but avoided a court martial, even if he later left the RAF after being grounded “for medical reasons.”

The other two passes under/between the spans of the Tower Bridge were accomplished by the same pilot in a single flight (he did it twice in a row!).  The stockbroker’s name was Paul Martin and he was out on bail after being charged with fraud.  Facing a future of jailtime, he flew his single-engine Beagle B.121 Pup twice through the span.  He would later crash his plane, probably in suicide as an escape from his legal predicament.


Dear sir,
I have the almost, enviable job of restoring a model of Francis McLeans Short pusher biplane. Not the original but the silver replica made to commemorate his flight up the Nile. Most of the work is obvious BUT the rigging in places has suffered and I have no clue about how to restore it. In particular the wings fold back and so rigging has to be unhooked to allow this. It is a spectacular model minute, 6in fuselage, and all working ailerons joystick rudders.
Can you advise anyone who can help?
Adrian Hope
The Old Smithy
Stobo
Peeblesshire
EH45 8NX
+44(0)1721760229


Have you any records of a Cessna Reg. No. GAT00 flying between the spans in July 1997.
I was interviewed by West Central Police i/c with the incident, it was front page on the Daily Express and also reported in the Daily Telegraph.
I know it happened, I was in the plane.