“Everyone asks me ‘how it feels to fly.’  It feels like riding in a high powered automobile, minus bumping over the rough roads, continually signaling to clear the way and keeping a watchful on the speedometer to see that you do not exceed the speed limit and provoke the wrath of the bicycle policeman or the covetous constable.”

On this date in aviation in 1911, the first woman pilot in the United States, Harriet Quimby, was granted her pilot certificate by the Aero Club of America.  Born in Arcadia, Michigan, on May 11, 1875, she was 36 at the time she earned her wings.

Quimby came from an unlikely field into aviation, having been a prolific journalist with over 250 published articles to her name, primarily as a theater critic.  On Long Island in 1910, she first came in touch with aviation after meeting the aviator and flight school owner John Moisant and his wife, Mathilde (who would fly soon after Quimby).  The year after, 1911, would be a busy one for Quimby.  She designed seven short movies for the silent movie houses — all would be made into films at the Biograph Studios in Hollywood.  And of course, she would also enroll and take lessons to fly.

“The men flyers have given out the impression that aeroplaning is very perilous work, something that an ordinary mortal should not dream of attempting.  But when I saw how easily the man flyers manipulated their machines I said I could fly.”

She used her position as the nation’s first female pilot wisely, quickly becoming a magnet of press interest, which she fueled with events and flights that quickly made her name widely known.  Quimby’s greatest achievement was that she was the first woman to fly across the English Channel.  Whereas Louis Blériot had done it from France to England, Quimby planned to take off from Dover aiming for Calais, so as to cross at the narrowest point.  In the newspapers, she wrote about the disbelief that the men had voiced while she had been preparing at Dover:

“I was annoyed from the start by the attitude of doubt on the part of the spectators that I would never really make the flight. They knew I had never used the machine before, and probably thought I would find some excuse at the last moment to back out of the flight. This attitude made me more determined than ever to succeed.”

On April 16, 1912, Harriet Quimby started the engine of her Blériot and took off for Calais.  Such flying was rough stuff as she would write, “when the engine is speeded a shower of this oil is also thrown back directly into the driver’s face.”  She missed Calais.  Instead of a flight of just over a half hour, she finally made landfall after almost a full hour flying 25 miles away and landed on the sands of the beaches of Hardelot-Plage, Pas-de-Calais.  Sadly, word of her triumph was eclipsed by the news of the sinking of the RMS Titanic after it hit an iceberg the day before her flight. 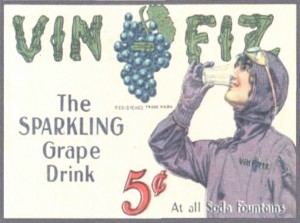 Nonetheless, her exploits attracted the attention of the Vin Fiz Company.  She was hired in April to serve as their new aviatrix advertising spokeswoman after the death of Calbraith Rodgers, whose epic cross-country flight had marked the first use of an airplane in advertising.  She would don a purple flight suit and fly at shows while photographs of her graced full page ads in popular magazines of the day, once again serving as a beacon lighting the way for all women who would later choose to learn to fly.

“I do feel well qualified to tell a beginner how she must dress and what she must do if she expects to be a flyer.  If a woman wants to fly, first of all, she must, of course, abandon skirts and don a knickerbocker uniform.”

Just eleven months to the day after earning her pilot certificate, on July 1, 1912, she was killed in an aircraft accident.  Flying in a new, two-seat Blériot monoplane at the Third Annual Boston Aviation Meet, held at Squantum, Massachusetts, she took a passenger, William Willard (coincidentally the event’s organizer) out for a flight across the harbor and around Boston Light.  After returning, she descended to 1,500 feet before the plane suddenly pitched down violently.  Aircraft in those days were without seat belts and thus, the two were ejected from the cockpit by the negative G forces.  They both fell to their deaths.  The unpiloted plane glided to a crash landing, overturning into a sodden area of ground.

Harriet Quimby’s legacy would be less of pioneering new achievements in the air, but rather forging a new path that ultimately resulted in society’s acceptance of women in the role of pilots.  In her footsteps would come many other famous women flyers, from Amelia Earhart to Florence “Pancho” Barnes, they would all owe a debt of gratitude to Harriet Quimby for being first.

As Quimby herself would say, “There is no reason why the aeroplane should not open up a fruitful occupation for women.  I see no reason they cannot realize handsome incomes by carrying passengers between adjacent towns, from parcel delivery, taking photographs or conducting schools of flying.  Any of these things it is now possible to do.”

Not all of the women flyers who would come later were as refined and “media savvy” as Harriet Quimby.  Many were camera shy and not very good in interviews.  Nonetheless, as was expected of them, once out of their airplanes, they would often dress the parts of society ladies — all except one, Florence “Pancho” Barnes.  Pancho was a daring flyer, a daredevil, and a wild woman who loved drink, cigars and airplanes (probably nearly equally).  As an example of her colorful language, she once told the press, “Flying makes me feel like a sex maniac in a whorehouse with a stack of $20 bills.”  Nonetheless, she was a brilliant pilot and would set as many records — maybe more than the popular Amelia Earhart.  However, her name would never gain the superstar status of those who could “dress like a lady and fly like one too.”  Pancho Barnes didn’t care — she would later say, “Hell, we had more fun in a week than those weenies had in a lifetime!”  She retired to the desert and opened up a small hotel and bar, the Happy Bottom Riding Club, that would later be featured prominently in the movie “The Right Stuff”.