It was 5:00 am on Friday, August 2, 1929.  Her Fokker F.VIIA called “The Spider” taxied out onto the field at Lympne Aerodrome, near Folkestone, England.  The pilot, Captain Charles D. Barnard, pushed the throttle forward and the plane’s single nine-cylinder Bristol Jupiter engine ran up smoothly.  The Fokker rolled down the grass and soon the tail lifted.  With a gentle pull on the control column, they rose majestically into the air.  On board, the aging Duchess of Bedford, Mary Russell, looked out of of her window and watched the white chalk cliffs of England’s south coast pass underneath.  This was her plane and her flight — a daring trip to Karachi, in British-ruled India — and she aimed to span the distance and return in record time.

The flight to Karachi was not the Duchess of Bedford’s first trip abroad by air — she had traveled around England, flown up to her Scottish home, and taken trips in a DH.60 Moth to France, Spain and Italy, among other destinations in Europe.  “Aerial travel opened out new possibilities” for her in a time long after she had thought her traveling days were past.  In ill health, she realized that she could take trips by air that impossible for her if by car, train and ship.  She also claimed that flying eased her tinnitus, a worsening condition that afflicted the 64 year old grand dame and which would eventually cause her to go completely deaf.  Yet the Dame Commander of the Order of the British Empire still had a few more grand voyages ahead of her.

From Lympne Aerodrome, the Duchess in her Fokker proceeded to Sofia, Bulgaria, a flight that covered 1,400 miles across Europe non-stop.  After a night’s rest, the following day, the Fokker covered 900 miles to reach Aleppo, in what was then called Asia Minor (French-ruled Syria).  Covering another 1,000 miles over the desert, they made Bushire (modern-day Bushehr, Iran) before nightfall.  With the dawn, they launched for the last leg of the grand voyage south, a 1,050 mile non-stop flight along the Persian Gulf to reach Karachi, reaching her destination on August 5, where she was feted by an official welcoming party that included a number of women who were intrigued by the Duchess and her daring flight. 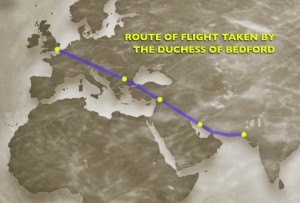 Just a day later, on August 6, she and her pilot, relaunched in the Fokker for the return flight, retracing the same route.  It took 11 hours to reach Iran, where they stopped once again for rest.  From there, they reflew the desert to Aleppo for rest, and then onward to Sofia, where at 4:30 pm, she landed.  Already exhausted, the Duchess and her flight crew caught more rest before making the final run to England, flying over Lympne for a landing at Croydon at 5:40 pm.  A message was was transmitted from Lympne with news of the plane’s sighting.  It had been a final day’s flight totaling 12 hours and 30 minutes.

She was greeted by a huge crowd that cheered wildly.  Once landed, she was soon carrying a large bouquet of flowers and smiling to the crowds.  She commented that the plane had performed perfectly, giving her a “pleasant, but uneventful trip.”  She also noted that she was “impressed with the comfort of such a journey in spite of the extreme heat encountered” along the way, having flown across deserts much of the way.

In all, the round trip of 10,000 miles was accomplished in just under eight days.  On some of the legs, the Duchess herself, an expert air traveler even if not yet a licensed pilot, flew the plane.  In the following year, she dedicated herself to becoming a licensed pilot.  She succeeded in achieving her pilot ratings on April 8, 1930 and just two days later, she departed on yet another long distance flight, with Captain Barnard along as her copilot.  This time, she aimed to fly from Lympne Aerodrome to Cape Town, South Africa, but that is another story….

The Duchess of Bedford’s purchased the Fokker to serve as her private plane.  It was a proven single engine aircraft, formerly carrying the moniker, “Princess Xenia”.  Fokker F.VIIs were considered excellent long distance travelers — Kingsford Smith, Amelia Earhart and many others owned or flew the type during the 1920s and 1930s.  The Duchess of Bedford’s aircraft had been formerly flown by Captain MacIntosh and Col. J. Fitzmaurice, who had attempted a trip across the Atlantic from Ireland earlier, but had not succeeded in the venture.  After that attempt, the plane had gone to Squadron Leader “Bert” Hinkley, who had attempted flights to India — he too had failed twice but was successful on the third attempt.  It was then that the Duchess bought the plane, considering it to be a proven plane for her trip.  After the Duchess finished her record-setting flights, she sold the aircraft to Captain Barnard, who toured England and India.  Its final owner was Sir Bossabhor Bumwandwallah of Bombay, who flew the plane for three years before sending it to scrap in 1937.  Any of these grand old Fokker F.VIIs would be ideal museum pieces today, but few remain.

5 thoughts on “The Duchess Flies to Karachi”