The Angel Flies at Paradise Ranch

The skies were clear over Paradise Ranch when the all-silver aircraft rolled out of its hangar.  Its long and graceful glider wings hung low over the taxiways as it inched forward to the runway.  Strangely, the two long spans were simply bolted to a modified F-104 Starfighter fuselage, a plane that usually featured very short supersonic wings instead.  No center spar cut through the fuselage, saving weight and also opening up a larger payload area.  The plane carried few markings, just USAF stars and bars on the front fuselage and wing.  On the tail, it bore the simple numbers “001″.  This was Lockheed’s latest TOP SECRET design, dubbed the “Angel” — it would go on to revolutionize aerial reconnaissance during the Cold War.

This day, August 4, 1955, would mark the first flight of a plane that would soon be renamed the U-2.  Yet a little known fact is that the U-2 almost never made it off the drawing boards.  The design would have likely disappeared from aviation history except for the personal intervention of the CIA’s famed William “Wild Bill” Donovan.  Donovan had come up empty-handed in his search for a high altitude platform to answer the needs of the Agency’s reconnaissance office for overflying the Soviet Union and China.  The USAF had nothing that could answer the nation’s burgeoning aerial reconnaissance requirement, despite having run a closed bid to develop options.  The USAF had favored a modified B-57 Canberra and sadly, their selected design was simply unable to make it to high enough altitudes to safely overfly the desired targets.

Yet Donovan had heard about the glider-like design that had been offered by Lockheed as part of the bid; it had been rejected by the USAF after review.  Unhappy with the Air Force’s process, he subsequently paid a visit to see what the famed Lockheed Skunk Works had on paper.  An avid glider enthusiast, Donovan recognized instantly the high flying potential of the aircraft.  Furthermore, at least on paper, the specifications of the aircraft matched the Agency’s target altitude requirements perfectly.  In Donovan’s eyes, Lockheed’s “losing design” had all the characteristics of a winning aircraft.  He took the project back to Langley and soon had it funded.  To avoid notice, the CIA’s first deposit of over $1.2 million was delivered quietly by car to Kelly Johnson’s private home. 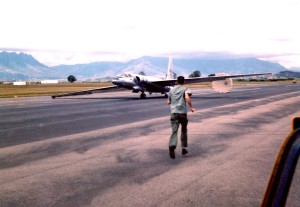 A U-2 on landing, its drogue parachute deployed to help slow the aircraft. Photo Credit: USAF

As was often the case with Lockheed’s secretive Skunk Works, the U-2 project advanced quickly — the prototype was delivered to Groom Lake for testing in just 88 days.  It was literally hand-built.  The results were astonishing — Lockheed delivered on time and under budget with the roughly 50 engineers working 65 hours a week to get it done.  The design room was so secret that the engineers did their own vacuuming and made their own coffee.  They took advantage of the secrecy in other ways too, hanging pictures of scantily clad girls on the wall (on the reverse side of each framed picture, they mounted artwork of ducks and hunting scenes so they could flip the pictures whenever an official visit was scheduled).  After the first test flights, an initial order for 20 aircraft was placed with a price tag of $22 million.

The U-2 was assembled and brought for testing to Groom Lake, the so-called “Paradise Ranch” where many of the USAF’s most secret projects were tested.  To avoid notice back at Burbank, engineers and workers were flown in weekly, arriving on Monday and leaving on Friday on a scheduled mini-airline that the USAF ran to service the site.  All went well until one of the Air Forces aircraft crashed, killing some of the engineers and CIA employees. 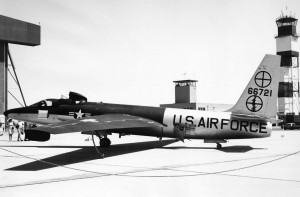 U-2D at Edwards AFB, c.1960, sporting an infrared sensor behind the cockpit to test the Missile Detection and Alarm System (MIDAS), which could detect Soviet ballistic missile launches. A second crewman sitting behind the pilot operated the MIDAS instruments. Photo Credit: USAF

Far removed from the public’s eye, the U-2, was soon flying regularly with a wide variety of strange equipment.  Whereas most airliners flew at altitudes of 10,000 to 20,000 feet at the time and military aircraft were designed for altitudes ranged upwards of 40,000, the U-2 was designed to fly above 70,000 feet of altitude.  At these heights, the aircraft could overfly the Soviet Union with ease.  Even if the Soviets could track it on radar, they couldn’t do anything to stop it — put simply, nothing they had could fly or shoot that high up.

The CIA and USAF were soon flying U-2s from secret bases around the world, having left their original site at Groom Lake, Buildings 217-220, to fly out of West Germany, England, France, Cyprus, Saudi Arabia, Panama, Pakistan, South Vietnam, the Philippines, Japan, Thailand and South Korea among other sites.

An early photo opportunity granted to the media after 1960, in which the U-2 was passed off as a high altitude research aircraft. Source: Library of Congress

“Until the U-2 was in operation, US intelligence did not have an effective means to perform two vital functions:  to warn the President against surprise attack from the Soviet Union and to provide him with the intelligence he needed to make difficult national security decisions.  In short, we were blind….  The U-2 gave us eyes to see inside the Iron Box.  It instantly became a major source of our intelligence about the Soviet Union.  It constituted nothing less than a revolution in intelligence.” — DCI George Tenet, speaking in a retrospective symposium at the National Defense University, Fort McNair, Washington, DC on September 17, 1998.

Given its secrecy, the U-2 also became an increasingly regular catalyst of UFO sightings around the world.  UFOs aside, the legacy of the U-2 is that it provided the United States with timely intelligence throughout the Cold War, ultimately superseded only by Project Oxcart with its the SR-71 Blackbird and D-21 programs.  Such missions do not come without costs and the U-2 program would take the lives of 45 pilots and ground crew, men whose sacrifices helped lift the veil of secrecy on the Soviets and Chinese, thus giving America the upper hand during the Cold War and helping to stabilize the conflict.

Groom Lake, also called the “Paradise Rance” is more widely known to the public as “Area 51″.  While most would think that the time of the USAF’s and CIA’s great aircraft projects has long passed, surpassed by satellites, the reality is quite the opposite.  Area 51 is continuing to expand and upgrade its facilities, reflecting more and more project work that is going on.  In 2011, at least one major project and several minor ones were underway, which have been documented based on commercially available satellite photographs.  Just what else may be happening out of sight, whether in older buildings or hidden within other buildings that look “innocent” remains to be seen — well, at least maybe in twenty years or so.