The little flying boat taxied out across the low waves of Lac du Bonnet, Manitoba.  The pilot blipped the power to turn it into the wind, then smoothly advanced the throttle.  The Vickers Vedette quickly accelerated.  Soon it was up “on step” and skipping over the low waves on the lake’s surface.  With a gentle pull on the joystick, the plane rose gracefully off the water.  Banking low over the waves, the pilot brought the craft around before climbing to altitude and disappearing over the lush Canadian forests into the distance.  It could have been just any flight on any day, but this was anything but that.  Today, August 3, in the year 1926, marked the first day of operations of the newly christened Royal Canadian Air Force and this, the Vickers Vedette, was its first aircraft. 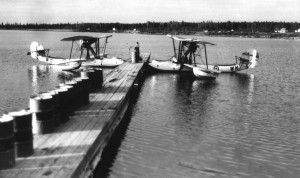 Ahead, the RCAF would face a wild country of largely uncharted rivers and lakes, the vast fields of the northern Great Plains, expansive forests and steep mountains.  Over two thousand miles spanned the Canadian nation, much of it unknown.  The RCAF’s first task would be the mapping of this wilderness land.  It would take almost 15 years to finish that first mission by photographing the vast Canadian heartland.  Along the way, the RCAF would add new duties — search and rescue, anti-smuggling operations, fisheries work, forestry patrol and culminating in the defense of the nation.

The RCAF’s early history is deeply intertwined with Vickers Vedette.  Over the first fifteen years of operations, 45 Vickers Vedettes were acquired of various models, making it not only the service’s first plane but also one of the longest serving.  The Vedette was also Canadian built, a product of the Canadian Vickers Limited company in Quebec.  The first aircraft carried a 200 hp Wright J-4, which proved a reasonable engine, however, the next 18 were equipped with the 210 hp Armstrong-Siddeley Lynx IV — these were called the Vedette Mark IIs.  In 1929, the RCAF acquired an additional 13 aircraft, dubbed Vedette Mk Vs.  As well, a contract was let for 11 more Vedette Mk VAs.  These replaced those lost due to attrition from the hard and long flying undertaken in the aerial survey work.

During the 1930s, the RCAF tried out a non-wooden hulled variant called the Vedette VI, which featured a Wright J-6 engine and an all metal hull.  This solved some of the problems with the continuous maintenance required by all wooden hulled flying boats — leaky and requiring continuous work, the planes were viewed as maintenance problems for the RCAF.  It seemed that the early RCAF had as much to do with flying machines as it did the work of naval boat repair.  A single Vedette V was then refitted with a metal hull to evaluate the feasibility of a conversion program, but in the lean budgetary times of the 1930s, the gains in improved maintenance could not justify refurbishment of the fleet. 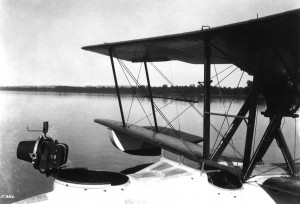 Vickers Vedette with the mounted survey camera on the front cockpit.

The flight operations were hard on the planes and flight crews.  Much of the flying was done over uncharted wilderness.  When planes were lost the pilots had to hike out or radio to be picked up by another aircraft.  By 1941, only 7 of the Vickers Vedette Mk VAs remained, along with the single Mk VI.  These were assigned to the RCAF’s No. 4 (BR) Squadron, where they served the Seaplane and Bomber Reconnaissance Training School at Vancouver, BC.  The last Vickers Vedettes were retired in May of that year and the RCAF would never look back.

The job was not without its perks, however.  Pilots would fly the trackless forests, land in lakes and in rivers, and camp in the field while completing their tasks.  Soon, they discovered that the maneuverability and slow speed of the Vedette made it not only an ideal aerial survey aircraft, but also a great platform for hunting and shooting grouse.  Many a dinner table was graced with grouse, until one of the pilots hit one of the birds while hunting it.

Except for the grouse incident, the Vedette proved to be an ideal aircraft for the new RCAF.  Many of the pilots who formed the backbone of the RCAF in the early days of World War II had come up into the air through the Vedettes.  The Vedette fared less well in commercial service, where it was uniformly disliked in preference of larger flying boats and where maintenance of the wooden hull proved too time-consuming for planes that were supposed to fly scheduled routes.

The crowning achievement of the RCAF and the Vedette is still apparent today — almost all of the maps and charts of Canada are still based on that first mission and the original photos and survey work done by the RCAF with its fleet of Vickers Vedettes, a fitting legacy for the RCAF and the nation of Canada.  Modern satellite images are used to update previous charts and maps, but the basic foundation of Canada’s known landscape owes a debt to the RCAF and the little flying boats of the interwar era.