Today in aviation history in 1927 marks the end of the Dole Derby, an ill-fated air race competition founded by James D. Dole, the famous Hawaiian pineapple magnate.  Seeking to capture the public relations opportunity that he saw from the recent success of Charles Lindbergh’s flight to Paris just a few months earlier, Dole put up a $25,000 prize for first and $10,000 for second to sponsor the first successful flights from San Francisco, California, to Honolulu, Hawaii.  When fifteen entrants signed on, the event was transformed from a pioneering incentive into an air race.  From the start, however, there were bad omens — one pair of flyers died in a crash (ominously, they had drawn #13 in the flight order) and then, just a day later, the pilot of a second team spun in as well.  Another plane ditched into San Francisco Bay on arrival for the race.  More would suffer other fates and, of the eleven, just eight took off for the race.  Only two would make it to Hawaii. 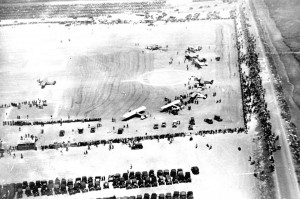 The competitors line up at Oakland Field, San Francisco, for the upcoming race. Photo Credit: Government of Hawaii

“It was foggy on Tuesday morning, August 16, 1927.  The mist shrouded Oakland Airport, drifting close above eight little airplanes lined up in a semicircle at the head of the dusty runway.  Fifteen men and a girl were busy about their rickety craft, attending to last minute details, adjusting balky engines and tightening flimsy control wires.  A crowd of 75,000 to 100,000 persons clustered along the wooden fences, the chill breeze failing to dampen their eager excitement.” — Years later, these words aptly described the scene, as written by Jane Eshleman Conant, a staff writer with the San Francisco Call-Bulletin. 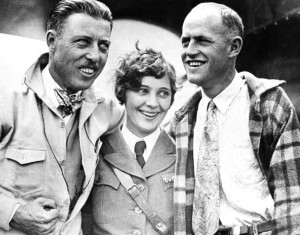 Incredibly, the competitors carried almost no maritime safety equipment and had very little survival training.  Mildred Doran demonstrated the cavalier attitude among the competitors by telling the press of a mishap they had encountered en route to California.  Forced down due to engine problems, they had to wait some days for repairs because they had no tools on board — the reason, as Mildred Doran blithely reported, “We threw them off at Long Beach because they were in the way and cluttering things up.”  In retrospect, it seems that the lure of James Dole’s $25,000 promise to the victor had clouded their eyes to the very real risks involved.

“Charles A. Lindbergh had just flown the Atlantic, in a little airplane very much like those lined up at Oakland Airport on that Tuesday morning. The Pacific was still undefeated.  If he could do it from New York to Paris, the Dole fliers (sic) believed they could do it from California to Honolulu.” 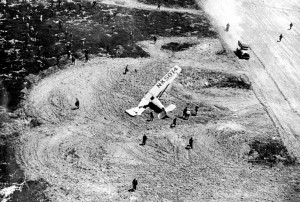 Another casualty of the ill-fated Dole Derby — “El Canto” as flown by Navy Lts. Norman A. Goddard and K. C. Hawkins. Photo Credit: Government of Hawaii

What the flyers seemingly ignored was that it was quite nearly impossible to “miss Europe” after flying the Atlantic, even if one were to be 200 miles off course.  The Hawaiian Islands, however, were mere volcanic specks in the vast emptiness of the Pacific Ocean.  The danger of their venture was obscured by the recent news on June 28th (about a month after Dole announced the prizes) that two Army aviators, Lester J. Maitland and Albert F. Hegenberger, had made the flight and landed at Wheeler Field on Oahu after 25 hours and 50 minutes in the air.  Two weeks later, an airmail pilot, Ernie Smith with his navigator, Emory Bronte, flew their plane, “The City of Oakland”, from Oakland airport to Hawaii — they fell short of Honolulu when they ran out of gas over Molokai but made it to the islands nonetheless.

Tragedy from the Start

On race day, a flag was waved to signal the start.  The pilots vied to be first off and “Oklahoma” was soon heading west over the horizon.  Then two competitors, ”El Encanto” and “Pabco Flyer” lined up next.  Both crashed on take off before a third plane, the prototype Lockheed Vega “Golden Eagle” managed it successfully.  The Vega disappeared into the distance as another airplane, “Miss Doran”, the little Buhl CA-5 Air Sedan with its young 22 year old Michigan lady passenger on board, took off, looking too small to be up to the challenge ahead.  It circled back just 10 minutes later, abandoning the venture.  Shortly after the “Oklahoma” surprisingly returned after “something ripped” inside the fuselage — repairs would be needed.  “Dallas Spirit” also departed but quickly returned when something went wrong with the aircraft’s tail.

Of the first six airplanes off, two had crashed, three had returned for repairs and only one was on its way to Hawaii.  Finally, “Aloha” and “Woolaroc” lined up, looking professional and large enough to make the flight.  Both made it off successfully, making it three planes aloft and in the race at that point. 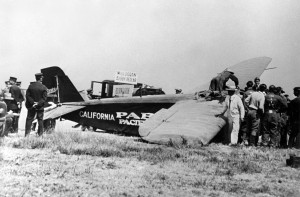 The final wreck of “Pabco Flyer” — a sad end to their air race, though without casualties.  Photo Credit:  Government of Hawaii.

With repairs, “Pabco Flyer” made yet another attempt but again crashed on take off.  It was the end of their bid.  Likewise, “Miss Doran” did some repair work and departed with their passenger, the 22 year old from Michigan, reportedly looking dashing with her brown flowing hair.  Thus, only four of the original eight aircraft were en route to Hawaii — in order of departure, they were “Golden Eagle”, “Aloha”, “Woolaroc”, and “Miss Doran”. 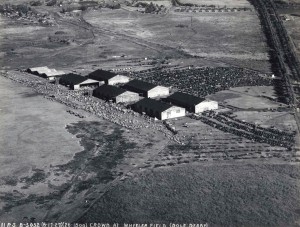 Thousands of spectators await at Wheeler Field, Oahu, Hawaii, for the arrival of the planes of the Dole Derby. Photo Credit: Government of Hawaii

A Victory Tempered by Great Costs

Fully 26 hours and 17 minutes later, “Woolaroc”, with pilot Arthur C. Goebel and navigator William V. Davis, Jr. arrived safely in Honolulu to claim Dole’s promised $25,000 prize.  A bit more than an hour later, “Aloha” arrived with pilot Martin Jensen and Captain Schluter navigating.  They made the trip in just 28 hours and 16 minutes and claimed the $10,000 second prize.  The spectators, press and race organizers waited for sight of or word of “Golden Eagle” and “Miss Doran”.  As the hours ticked over, however, it became clear that they must have run out of gas short of Hawaii or perhaps had crashed over the horizon somewhere nearby.  In any case, it was certain that they were down somewhere, lost in the vast Pacific Ocean. 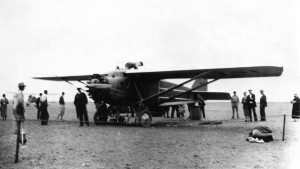 Ace pilot Capt. William P. Erwin and A. H. Eichwaldt took off in the “Dallas Spirit” and had returned because of torn wing fabric.  It would depart three days later for Hawaii.  Photo Credit: Government of Hawaii

Soon the wire reports carried news of the victory and the missing planes and competitors.  Yet despite the terrible news, the press photos of the smiling pilots from “Woolaroc” and “Aloha”, each laden with a flowering lei while shaking the Hawaiian governor’s hand, must have been incentive enough to encourage yet one more disastrous attempt at Hawaii.  Thus, three days later — well after the competition was already over, — “Dallas Spirit” took off heading for Honolulu.  Captain Erwin promised to search for the two lost aircraft on the way.  Unsurprisingly, the “Dallas Spirit” would also vanish into the vastness of the Pacific.

A further search was undertaken for the three missing flight crews, seven people in all, including the young Mildred Doran of Michigan.  No trace was ever found, not even of Augie Pedlar’s straw hat.  So ended the ill-fated Dole Derby, a little known story in aviation history.  To our knowledge, the experience of the “Disaster Derby” proved too much for the race sponsor, James Dole.  It would be the last aviation event that the Dole company would sponsor.

The winning aircraft of the Dole Derby, “Woolaroc”, was brought back to the United States and ended up on Frank Phillips Ranch in 1929.  Frank Phillips, one of the two brothers who founded the Phillips Petroleum Company, had sponsored the plane’s winning flight to Hawaii.  Renaming his ranch Woolaroc, he soon built a stone and glass-enclosed display building for the airplane.  In addition, he began collecting Colt firearms and western memorabilia from Oklahoma and around the nation.  Within ten years, the collection was opened to the public and became the Woolaroc Museum — the airplane is displayed there to this day.  Visit them online at:  http://www.woolaroc.org/


Marvelous article! I especially love the film. I lead historic tours of Oakland, California, for the Oakland Museum of California. I explain the Dole Derby. I’ll include a recommendation that visitors check out this article. Thank you.


I am the great nephew of Martin Jensen. Great to read this article..


I am Martin Jensen’s Grandson, my mom Barbara Jensen was his daughter.


My great-uncle, a career army officer serving from WWI – WWII, was stationed on Oahu during the Dole Pineapple Derby. Among his keepsakes are some photos he took of the “Aloha” in Hawaii. Your grandfather appears to be in one of them. I first discovered his photos several years ago (before the internet was a research tool) and it was a fascinating search to discover the history behind the photos. I would be happy to email you copies of the photos if you wish.


That would be great if you could send me the photos via email. Thank you so much!