Today in aviation history marks the combat debut of the Luftwaffe’s revolutionary Messerschmidt Me 163 Komet, the world’s first true point interceptor.  Rocket-powered, nimble and well-armed, it seemed perfect for Germany’s challenge facing the onslaught of daylight strategic bombing.  The Komet might have changed air defense theory and practice completely.  Instead of putting planes up to orbit in the projected path of arriving bombers, pilots would wait by the flight line until radar controllers tracked the incoming bombers to nearly overhead.  Only then would an order to launch be given.  The pilots would sprint to their planes, buckle in, switch on the rockets to take off, then point skyward and climb the Komet nearly vertically to high altitude.  In just two minutes, a fleet of Komet interceptors would be above the incoming bombers, looking down at their prey.  Yet what looked good in theory didn’t quite work out in practice — put simply, fighter pilot tactics and armaments technology lagged too far behind the speeds and capabilities of the new rocket interceptor.

“We’d take off and try to keep the plane low, say 15 feet up, and then start to trim it for speed and then very gradually climb as we accelerated to the best climbing speed, which was about 420 miles per hour.  The airplane was very short-coupled, so you didn’t want to over-control it in pitch as you took off.  When we reached the best climbing speed, we’d pull back and climb at approximately 70 degrees.”  So said Rudy Opitz, who served both as the chief test pilot of the Komet program and its key combat pilot instructor. 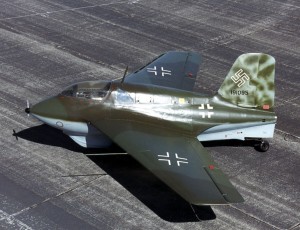 Me 163B Komet at WPAFB, one of the many aircraft brought back to the USA for postwar testing.

Rocket power gave incredible thrust, but also burned out quickly.  Luftwaffe pilots had such a short fuel supply that usually they ran out too quickly to make effective use of the Komet in combat.  Sometimes, they couldn’t find the bombers quickly enough to make successful attacks.  It was only years later during the jet age that started with the Korean War, when pilots learned to adjust their scan distance outward far enough to find their targets — and this was only made possible by the full integration of aircraft-mounted radar and ground controller headings to bring the interceptor aircraft to their targets.

Yet the Komet was fast and virtually unmatched in the skies.  It flew to the very edge of supersonic speeds and Rudy Opitz set a record speed of 698 mph in an Me 163 Komet.  Pilots had to concentrate to avoid “compressibility” with the loss of control that could result with power on in anything less than a steep climb.  It wasn’t until two and a half years after the end of the war in Europe, in October 1947, that supersonic flight had been achieved in the Bell X-1.

“You had unrestricted throttle control from ground idle to flight idle to cruise power to full power.  Prior to climbing you had to be careful not to exceed the critical Mach number, which would make the aircraft unstable and tend to tuck under.  We first had a red lamp in the cockpit to warn us when we approached critical Mach.  The problem was you were looking outside and didn’t see the lamp.  So we installed a horn.  Finally, we had to have the horn positioned right behind the pilot’s head or it might not be heard.  Yet the cockpit was not considered noisy.”

One of the two Maschinenkanone Mk 108 30mm autocannons that were mounted on the Komet.

The Komet’s firepower was quite heavy, despite the plane’s small size and light weight.  Two Mk 108 30mm cannons were mounted on the underside of the nose.  However, the weapon’s muzzle velocity was too low, the rate of fire was insufficient for high speed passes and ballistic drop was a problem.  As the planes flashed by on a firing pass, closure rates could easily exceed 300 mph in relative speeds and, if head-on, might be over 700 mph.  As a result, the pilots couldn’t adjust their line up and aim fast enough to regularly achieve hits with sufficient rounds to knock down their targets.  Further, American bombers were so well armored that it could take several passes to bring one down.  Only during the Korean War did fighter pilot tactics and armament evolve to successfully address the relative speeds faced.  In 1944 and 1945, Luftwaffe pilots had already found were that combat theory was inappropriate to the advantages offered by their little rocket plane.

“…They were thinking in conventional fighter pilot terms:  you sight a target in your gun sight and take the time to hold the target.  But at a climb rate of 15,000 feet per minute (a Mustang climbed at one tenth that rate), you might find yourself past the target and it’s already way down below.  Although we were supposed to have seven minutes of fuel, we had five.  There was therefore a premium on a fast close to conserve fuel, and then you had a only a few seconds to use your Mk 108 [30mm] cannon.  For many, by the time they were ready to fire at the target, they had run out of fuel.  It was something you had to learn yourself.” 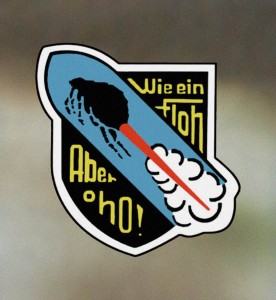 Pilots soon learned new rules of aerial combat.  Instead of the classic pursuit turn, they would use the extraordinary speed and climb rate advantages to engage the American bombers in new ways.  If intercepted by P-51s, P-47s or P-38s, the Komet pilots could simply climb away rapidly, never bothering to engage.  Dogfights were a thing of the past — in any case, all that mattered was getting to the bombers and hit them where they were weakest.

“Now you can imagine a fighter pilot with little experience would want to fly a standard approach from the back, maybe out of a 15-degree turn and attack a B-17 bristling with that massive defense power.  That became a pretty risky thing.  And approaching bombers one aircraft at a time, using that standard school-training approach, would mean your chance to fly very many missions was low.  The highly experienced fighter pilots could fly and attack in a 45-degree climb.  They were quite safe because the turrets couldn’t easily follow them.  These were the pilots who survived.” 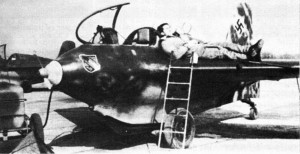 A Komet pilot with 2./JG400 sleeping on the plane’s wing between missions.

In the hands of a skilled pilot, the Komet proved deadly — one pilot, Feldwebel Siegfried Schubert, shot down two B-17 Flying Fortresses in just five minutes from take off to landing.  Schubert’s attack was the interceptor theorist’s dream come true — but there were few skilled pilots left who could achieve that.  By the end of the war, new pilots were entering combat with just 50 hours total time, barely enough to reliably fly, navigate and land a training plane, let alone manage a high performance fighter and engage in combat.

Even if several squadrons of Komets were deployed, there were never enough of the planes to make a difference.  One squadron carried the emblem of a flea with the phrase, “Wie ein flea, but oh!”  This was a salute to the small size and incredible capabilities of the Me 163 — yet equally, by the time the Komet made its combat debut on August 16, 1944, Germany’s Luftwaffe was already stretched thin and the Me 163 was just another case of “too little, too late”.   The dream of the air defense strategists was to have been thousands of Komets deployed to bases ringing Germany.  Instead, they were employed in small handfuls — at most, less than 100 were operational at any one time period.  Instead of a swarm of dozens of Komets attacking, the pilots were more or less on their own, attacking singly against the layered defenses of the large bombers formations.  That they could survive that gauntlet is testimony to the incredible speeds and small size of the tiny Me 163.

In the end, the Me 163′s “Achilles heel” came at landing.  Komets would return to their bases with no remaining rocket fuel, essentially reduced to little more than high performance gliders.  The USAAF P-51D Mustangs would orbit down low nearby to attack as they came in.

“I saw P-51s at one airbase flying just outside the defense perimeter created by our antiaircraft guns.  If you had a 163 pilot with low flying time, he would set up a normal landing pattern and one of the allied fighters would just come out and make a sweep.  If he didn’t get the Komet, another would make a sweep, and they’d just down him.  Whereas the experienced 163 pilot would come down at 500 miles per hour, down to the deck and come over the airport and fly inside the defense perimeter and stay there circling until it bled off its speed and landed.  The Allied fighters had a long way to fly home, and were not going to risk flying within that perimeter.  But there were very few people who could fly the 163 to its best performance because the most experienced pilots were needed elsewhere.” 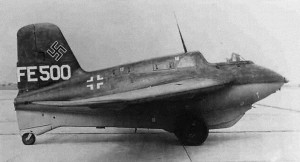 Captured Me 163B Komet heading into testing with the USAAF.

The Komet program, despite intensive investment, was a failure.  That failure, however, was not with the technology — despite persistent assumptions about rocket explosions killing pilots and other supposed shortcomings with the plane, the actual record shows the opposite — the planes didn’t explode on take 0ff and none of the pilots were lost to compressibility.  Instead it was outdated tactics and ineffective weapons that proved the greatest problems face.  Low fire rates, low muzzle velocity and ballistic drop hampered the aircraft’s success when attacking.

Despite several hundred planes built, the Me 163 Komet shot down only 16 American planes in its combat career.  After the end of World War II, Me 163s and many other amazing German aircraft designs were taken to the United States, England and the Soviet Union for analysis.  There, finally, the Me 163 Komet would finally prove its worth after the war.  The lessons learned and tactics that had evolved with the Komet were carried forward into the new jet age.  Aerial combat theories and new weapons technologies, radar control practices and air-to-air missiles were developed and deployed.  The interceptor profile born with the Me 163 Komet would finally be perfected in practice with such aircraft as the Soviet MiG-21, the American F-106 and the British RAF’s English Electric BAC Lightning.