On this date in aviation history in 1957, the US Department of Defense issued a cancellation notice on a very special aircraft design — an all-weather interceptor from Republic Aviation Corporation that was to be capable of speeds of Mach 3 at altitudes above 60,000 feet.  This was the XF-103 program.  While the Republic team had created an impressive aircraft design, the program would encounter critical delays in other areas that would stymy the company’s efforts.  Problems spanned three crucial areas — the aircraft’s metal skin, its engine performance and its weapons systems.  Ultimately, the XF-103 never made it past the mock-up stage.  Yet despite the engineering problems, the real reason the XF-103 was cancelled was something that came from a very unexpected direction — the Soviet Union itself. 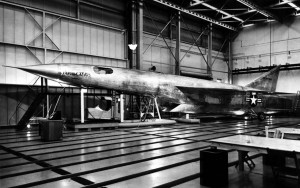 First and foremost among the engineering challenges facing Republic was a metals problem.  The frictional heat from flying at Mach 3 was projected to reach thousands of degrees Fahrenheit.  In other words, a fighter plane like the XF-103 would glow white-blue hot when flying typical missions — something it would have to do daily.  Aircraft aluminum would melt at such temperatures — in fact, almost every metal would be unable to withstand the temperatures projected.  This left designers with only one option for the aircraft skin — pure titanium.  What looked good on the drawing board, however, proved difficult in manufacturing.  New processes for shaping and handling titanium had to be developed from scratch.  This resulted in significant delays in the project for Republic, much to the consternation of management.

Second, achieving Mach 3 called for a jet engine technology that was also barely off the drawing boards.  Republic selected the Wright TJ-32 J67, an engine based on the revolutionary Rolls-Royce Olympus BOl.1/2A design (a variation of this engine would later power the Concorde).  Sadly, the Wright J67 also proved a difficult project with serious problems and delays.  Republic hoped that Wright would get the technology working well in time for the aircraft to achieve its design goals.  Lacking a reliable test engine, Republic offered the USAF an option for a lower thrust engine, the J65, as a stopgap with which to proceed with flight testing. 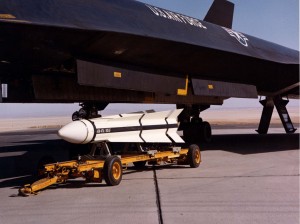 The AIM-47, a development of the Hughes GAR-9. Photo Credit: National Museum of the USAF

Third, the aircraft’s weapons systems would have to be developed to reliably operate at Mach 3.  Cannons or machine guns were not viable.  Quite simply, the muzzle velocities of such weapons were too low for Mach 3 engagements — the aircraft would end up flying into a hail of its own bullets.  This left one option, which was the use of radar guided missiles.  Yet hanging a missile on a wing at those speeds is virtually impossible due to shock wave patterns.  Similarly, carrying missiles in interior bays brings challenges due to temperature variations, aerodynamics when opening and closing the bay and separation of the missile from the aircraft during the firing phase.  The new idea of air-to-air radar-guided missiles would push the limits of what was possible.  It would require special design work, improved guidance systems and advanced rocket propulsion systems.  Further, the aircraft’s own on board radar system would need to be developed targeting at longer ranges.  At Mach 3, radars of that era couldn’t possibly track, acquire and lock-on at the ranges needed to ensure that the aircraft could engage a target before passing it by and leaving it behind.

All of these areas would be addressed — despite delays.  The hard-learned lessons of the difficulties and advantages of titanium construction, engine technologies and weapons systems design would go on to be integrated into another aircraft — the YF-12, A-12 and SR-71 Blackbird.  To answer the weapons system requirement, a new missile and radar system from Hughes, the GAR-9 missile, would be coupled with the AN/ASG-18 radar system.  That system would evolve into the AIM-47 Falcon which, once again, would finally evolve into something that would be deployed — not by the USAF, but by the US Navy on board is F-14 Tomcat fighter — AIM-54 Phoenix missile.  Titanium skins would evolve as well. 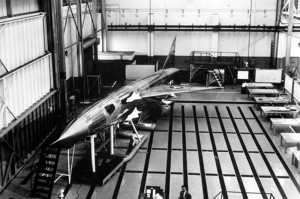 The Republic XF-103 mock-up — its needle-nose looking fast even on a parked prototype. Photo Credit: USAF

The End of the Program

In the end, the engineering challenges would not be the final straw.  Critically, it was discovered that the Russians simply didn’t have a bomber on the drawing boards that required an interceptor with such incredible speeds.  The USAF didn’t know that, however, when the design project was launched in 1949, but as the XF-103′s design and engineered evolved, a better understanding of the USSR’s aircraft development programs also emerged.  The planners realized that Soviets could not successfully achieve a Mach 3.0+ bomber design — it was beyond their industry’s capabilities.  Facing rising costs, even if the technological issues would have been resolved, the aircraft became superfluous simply because it had no driving operational requirement.  And thus, it was the Soviet Union that killed the XF-103.

In retrospect, the XF-103 represents a watershed design — not because of its success or failure but because it marks a critical transition point in military aviation history.  With the XF-103, US and Western aviation engineering and technologies finally outstretched the reach of the Soviet Union’s aerospace industry.  As such, the XF-103 program represented the limit to which the USAF had to go to end to Soviet technological competition in high speed aircraft.  From that point onward, the challenge would shift from the simple equation of “faster and higher”.  Realizing the fruitlessness of competing in technological terms, Soviet planners instead opted to produce vast numbers of overbuilt and overpowered simple aircraft to answer the highly engineered specialist designs of the West.

In the end, technology and the stronger economies of the United States and Europe won the Cold War.  It didn’t have to go that way, but thankfully it did — the West won the Cold War.  The XF-103 played an unexpected part in that victory.  Today, we are left to imagine the what-ifs of the XF-103 program — a dream of a Mach 3 interceptor that was never to be.

Several other interceptor programs would proceed ahead in the wake of the XF-103 cancellation.  North American offered the XF-108, which looked altogether like a smaller version of their Valkyrie bomber.  Lockheed’s Skunk Works produced the YF-12, which would evolve into the SR-71 Blackbird.  The YF-12 would feature a titanium skin, an advanced radar system from Hughes, and a pair of powerful engines that would meet the operational requirements of Mach 3.0+ flight — all problems that plagued Republic’s XF-103 program.  Ultimately, however, even the YF-12 would receive the budgetary axe, though the SR-71 would continue on into full deployment and operation.  Even then, the SR-71 would not be the last of the high speed flyers.  Lockheed would go on to design the Mach 5.0 Penetrator, a derivative and subsequent development of the SR-71.  Like so many other projects, however, the Penetrator would be cut as well — its capabilities exceeded by the emerging technologies of satellite reconnaissance.


Thanks for posting this. I’m a docent at the Aerospace Museum of California and my main interest in aerospace history is the X-15 flight research program.

I believe that the photos may misidentify the first of two F-103 prototypes (XF-103) as a mock-up. From 1971 to 1973 I worked (in a startup company) with an engineer who had worked on this project at Republic. He said they were within $1 million cost of having the first prototype ready to fly with the last of the big work to be done having been the landing gear. The aircraft depicted in those photos may be the prototype, rather than an earlier mock-up.

One more thing, about skin heating — if it could get to white hot I’d like to find reference material to back that up. The X-15′s Inconel X skin normally only reached 1,200 degrees (red hot) on reentry from space. Subject to checking again in some X-15 related documents, I doubt that even cruising at Mach 3 could heat even ordinary aluminum to white hot temperature, a minimum of about 2,300 degrees F.

I’ve also heard a report and a second source confirmation of a maximum speed achieved by an F-111F on one flight out of Lakenheath for a speed that I’ll only name as surprisingly higher than Mach 3, the exact number might still be classified. That flight was a dash to top speed and back down, trying to sustain the top speed would have caused the airframe to soften.

Other reports visible on the web include ex-F-111 pilots reporting Mach 2.8 in F models, probably with the engines’ restrictors pulled. Mach 2.8 is the maximum that its mach meter can indicate. I can confirm that as the software engineer who wrote the software for Garrett AiResearch’s competitor for the SCADC (Standard Central Air Data Computer) contract, later awarded to Marconi. The CADC software meets system specs that require clamping the Mach calculation to a maximum of 2.8. Incidentally, for a different CADC, I was shocked recently to find that the B-1B is still flying with my 1984 (“legacy”) software.