To the Heliosheath and Beyond… 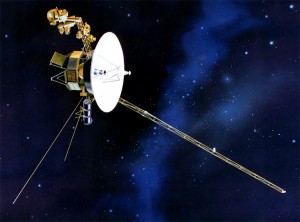 “This is a present from a small, distant world, a token of our sounds, our science, our images, our music, our thoughts and our feelings. We are attempting to survive our time so we may live into yours.” — President Jimmy Carter

For 35 years, a small spacecraft has worked its way outward from the sun, traveling beyond the outermost planetary orbits.  Unlike other spacecraft, its destination is outside of our solar system.  Along the way, the craft has provided scientific measurements and photographs of the great  planetary gas giants of our solar system.  Launched on August 20, 1977, in just two years it reached Jupiter.  Using a then new technique called “gravity assist”, it accelerated along and took only a year to reach Saturn.  Once again, the space craft would use the gravitational forces of the large gas giant to slingshot around and accelerate itself onward.  Given the vast distances involved, however, it took another six years to reach Uranus, arriving in 1986.  Again, the craft was maneuvered onto a path that would slingshot off the giant planet’s gravitational pull.  Three years later, in 1989, it reached the planet Neptune.  A final time, it zoomed in close and accelerated off of the planet’s gravity.  This time, however, it would point outward into the unknown — to the heliosheath and beyond the boundaries of our solar system.

Today in aerospace history marks the launch of the first of two spacecraft in the Voyager series — Voyager 2.  The aptly named Voyager 1 would be launched two weeks later with a different path to the edges of the solar system and beyond.  Both spacecraft would use gravity assist to take them to the edges of our solar system.  Continuing outward, they are the first (and only) spacecraft to measure the so-called heliosheath, the outermost layer of the heliosphere.  On the way, the Voyager spacecraft would complete a “Planetary Grand Tour”, taking measurements and snapping photos of planets that had previously only been seen from telescopes on Earth itself.  For many of these planets, the photos and data returned are the only flybys ever achieved — yet today, the Voyager 2 and Voyager 1 are on a new mission — to investigate the heliosheath. 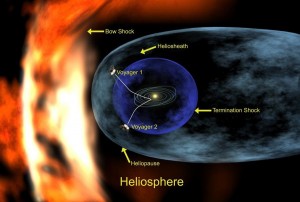 The relative positions and paths of Voyager 2 and Voyager 1 — missions 35 years long (so far). Bright yellow and orange depict an overly colorized representation of the interstellar gasses that race around and past our solar system. Illustration by NASA.

The heliosheath is where the solar wind produced by our own sun — the unseen rays of electrons and particles that emanate outward — meets the massive rush of interstellar gas that passes by our own solar system.  Essentially, the sun’s rays travel outward at over a million miles an hour — which holds back a “galactic wind” of interstellar gas and creates the solar environment in which we live.  The heliosphere is like a bubble around which the galactic winds of interstellar gasses flow.  Within the heliosphere, the environment is dominated by the sun’s rays.  Beyond the edge of the heliosheath, the environment is dominated by that of the galaxy’s own interstellar gasses.  Until just a couple of years ago, with the twin Voyager spacecraft finally reaching the heliosheath, everything we knew about the outer boundaries of the heliosphere was theoretical.  Now, with the measurements coming from Voyager 2 and Voyager 1, we have the first solid scientific evidence of the boundary and what lies beyond. 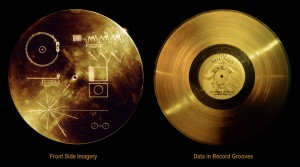 Front and reverse sides of the Golden Record on board the Voyager spacecraft. Photo Credit: NASA

In the unlikely event that the spacecraft is ever located by another race of beings (aliens) or recovered by mankind, it carries a Golden Record.  The Golden Record is an amazing creation.  To survive the cosmic beating of thousands of years, it is made of solid gold.  However, it is also a perfectly 20th Century invention, based on the flat, black and circular disks that were once the dominant way people the world over played music — in other words, the record.  On the Voyagers’ two Golden Records (each of the Voyager spacecraft carries one) are sounds and images of mankind’s world, embedded as record data.  What sounds and images, one might ask?  The things that scientists and others felt were the best of us, those things that we believe offer the most complete and true picture of mankind, who we are and of the myriad combination of our cultures on this planet.

The records contains a wide range of things.  There are the sounds of whale songs (a popular cultural focus of the 1970s).  There is also a collection of music that best represents mankind’s artistic side (which may be of less interest to interstellar aliens than our biology), such as Beethoven, Guan Pinghu, Mozart, Stravinsky, Blind Willie Johnson, Chuck Berry and Kesarbai Kerkar (some of those are a bit of a mystery to the crew at Historic Wings, by the way, making us wonder what we’re missing out on).  There are also images of earth, including diagrams of our species and other flora and fauna of our planet.  Finally, there is a map that points the way to our star.

Explanation of the Voyager Golden Record. Illustration by NASA

Of course, this also assumes that whoever finds the Golden Record will figure out and know how to play it.  Thus, the record also is engraved with images that detail how to get the data off, using a record player — a needle is included to play the data.  That’s helpful, I suppose — in today’s world of iPhones, tablets and mp3s,  today’s kids in America don’t even know what a record player is — and that brings up another question:  if Voyager were launched today, would we include a Golden iPhone mounted on its side with instructions on how to push the buttons?

The twin Voyager missions are slated to continue for at least another eight years.  After that, it is expected that the power system on board the spacecraft will no longer be able to charge and run the electronics of the craft.  Going silent without power, Voyager 2 will become a “lifeless” hulk of “space junk” flying outward from the sun.  Yet during this time, the spacecraft will finish their final mission with a triumph.  Clearing the last outer layers of the heliosphere, the Voyagers will give us the first look at space beyond our sun’s influence — the first measurements of the space out there in the galaxy.  Having reached “escape velocity” (the speed at which an object can leave orbit and will never return), Voyager will continue outward into interstellar space until….  Well, nobody knows when.

I suppose until a little green men pick it up and play the Golden Record.  (“Hey Gork, Look!  It’s a Frisbee from another planet!”)


Now today’s bit of history was very interesting. I have often wondered if they would
find others. The size of the universe is mind boggling.