Most early aviators of the Victorian age were explorers, inventors and showmen, yet Henry Coxwell was a scientist, first and foremost.  His endeavors involved balloons only because they could take him to the upper altitudes for direct scientific measurements for the study of weather and rain.  It was pure research on the one hand, but on the other, it was pioneering aviation.  Although Coxwell had been flying balloons for years, he was entirely unprepared for the flight that he was about take with his colleague, Dr. James Glaisher.  On September 5, 1862, they took off to take the first measurements in the higher altitudes, sailing tens of thousands of feet into the skies on a mission of scientific exploration.  Nobody had any idea of the extreme cold to be encountered at upper altitudes, nor of the thinning oxygen levels and the hypoxia it would soon bring.  The two men were woefully under-prepared and completely ignorant of the risks they faced.  As it happened, they were in for the ride of their lives, one that would very nearly kill them.  Oh, but the data they collected — it would change the world as they knew it…. 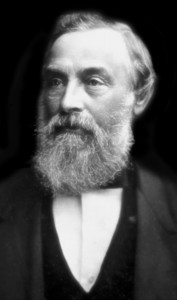 The Invitation and Scientific Goal

Earlier in the year, Henry Coxwell had accepted an invitation from the British Association of Science to undertake a series of weather, humidity and temperature measurements at various altitudes in a balloon along with his colleague, the noted scientist Dr. James Glaisher.  Together, they would make multiple ascents, referencing and recording temperatures and humidity data at different altitudes.  The first two flights were to lower altitudes, entering the cloud base and taking humidity measurements as they flew.  Their third flight, however, was planned to achieve an altitude of miles — far above any level that any past balloonist had ever flown.

Coxwell’s balloon was built by his own company, a specialty aeronautics firm.  It was 55 feet in diameter and 80 feet tall.  Its gas capacity was significant, at 93,000 cubic feet.  As well, the basket was large enough to hold the two men as well as their collection of scientific instruments.  Moreover, Coxwell was a very skilled pilot, having flown in England and France many times for many years.  They would launch from the Stafford Road Gasworks in the UK, giving them a good supply of the gas they would need to fill the balloon’s globe. 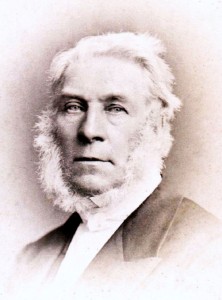 Promptly at 1:00 pm, they were ready for launch — as it happened, they flew upward at precisely 1:03 pm, beginning their log entries of scientific data with altitude, temperature and humidity data.  At intervals as they rose and descended, they would record the readings by hand from the instruments mounted aboard in the basket.  Overhead, a solid cloud deck loomed — they looked forward to rising through it and gaining the increased humidity measurements they had encountered before.  Once above the clouds, they would enter into the unknown.  What were the temperatures and humidity levels above?  How did those levels change as they ascended through 1 mile?  2 miles?  3 miles?  At around 5 miles, the expansion they predicted in the gas envelope could become a risk, and so, at that height they meant to climb into the rigging and pull the gas release line to commence a descent. 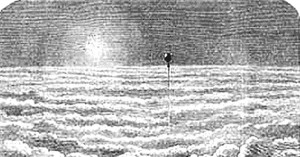 Above the cloud deck, the balloon rises majestically into the clear sunlight. Illustration from the Illustrate London News

At first, the ascent went well.  Coxwell would later write about it, saying, “On emerging from the cloud at seventeen minutes past one, we came into a flood of light, with a beautiful blue sky without a cloud above us, and a magnificent sea of cloud below, its surface being varied with endless hills, hillocks, mountain chains and many snow white masses rising from it.”  It was a stunning view and he attempted a photograph of the cloud deck from above.  Sadly, it did not properly expose — it would have likely been the first photograph in history of clouds as seen from on top.

As they rose, Glaisher continued to write down the temperature and humidity data.  The pair recognized that the temperatures were dropping steadily as they passed two miles.  They had been aloft just 19 minutes.  The temperatures dropped more as they gained three miles of altitude.  They began to notice a shortness of breath — in the Victorian age, scientists had yet to understand how the drop in air pressure affected the human body.  Hypoxia was a concept that was not understood.  Its warning signs were not yet recognized.  At 43 years old, Coxwell wasn’t in the best shape for high altitude flying — nor was Glaisher.  Soon the thinning air was taking its toll on the men.  At reaching 4 miles of altitude, they were having trouble writing. 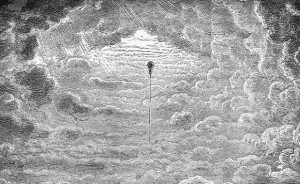 Into the halls of clouds aloft. Illustration from the Illustrated London News

Into the Hands of the Fates

At 47 minutes into the flight, the two men reached 5.5 miles of altitude — nearly 29,000 feet — exactly as planned.  Their hands and feet were freezing as they tried to write the measurements.  They couldn’t understand what was happening and why.  What they were recording was amazing — unexpectedly, they found that the higher they flew, the less humidity was found in the air.  Likewise, it seemed to be getting colder and colder, and the temperatures were over -30 degrees F, freezing ranges that nobody had ever predicted.  Further, the changes were so large that it seemed reasonable to assume that they did not vary significantly from day to day.

Whereas they had thought in the early parts of the flight that they might endure the cold with some shivering, now they realized that frostbite was setting in quickly on their exposed skin, hands and feet.  They were dressed for an autumn day, not for the equivalent of an Arctic winter.  Indeed, they were wearing clothes befitting their status as scientists, as if heading out for an autumn stroll.  Further, they were gasping for air and feeling lightheaded.  As Coxwell and Glaisher took notes and measurements, they realized that they could no longer read the instruments clearly.  Then Dr. Glaisher noted that he didn’t seem to have any control any longer of his arms and legs.  Coxwell looked over at Dr. Glaisher, spying him just as he fell unconscious. 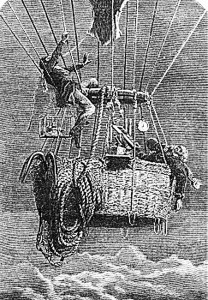 At that moment, Coxwell realized the gravity of the situation.  He knew he must begin their descent, yet he found his hands were so cold that he couldn’t climb up the rigging to pull the gas release valve.  He stared at his two hands in disbelief.  They had turned black from a lack of oxygen.  At that moment, he recognized that they would die unless he could pull the release — somehow.  With a final effort, exhausted and without breath, he pulled himself up with his elbows into the rigging, yet his fingers didn’t respond to grasp the gas release line.  His eyesight seemed to narrow and he felt dizzy — a fall from this height would be certain death.  He leaned forward and took the release line in his teeth and pulled down hard.  He opened the valve once.  Then again.  And then a third time, each time pulling with his teeth.  Finally, the balloon began to descend.  He pulled more and the balloon started to fall downward, descending rapidly now.  Then, as he passed back into  lower altitudes, he felt he could breath again.

Dr. Glaisher stirred — he had been unconscious for over seven minutes.  With the high air density, he was regaining consciousness.  Slowly he regained consciousness.  As they discussed, their condition, Coxwell related how his hands were still numb — Dr. Glaisher poured brandy over them to help revive feeling, a novel idea (and probably a waste of good brandy).  Ever the scientist, then Dr. Glaisher went back to recording his measurements.  Coxwell dropped ballast to slow the rate of descent.  Ultimately, he managed a perfect landing.  It had been a narrow escape from death — yet for both men, it was the scientific triumph of their lifetime.

Three years later, in 1885, Henry Coxwell decided that his ballooning days were over.  The experiences of higher altitude flight had been extraordinary, but also terribly dangerous.  For the Victorian age, their discoveries were worthy of the highest honors in science.  No longer were the upper atmospheres as mysterious and unknown.  The next discoveries would be best pursued by others — and certainly, both Coxwell and Glaisher felt with some confident, just a little more study would finally tame the mysteries of the weather and predictions of rain, snow and the storms with scientific precision.

Well, on that last count, they were wrong.  The mysteries of the weather remain one of the greatest challenges in science — just ask your weatherman about that.


Are the temperature measurements made by Glaisher and Coxwell available, online if possible?

Many thanks for a very interesting article.


Interesting article! The town they took off from was WOLVERHAMPTON, chosen because being in the middle of the country there was less chance of them being blown out to sea. Even the Midlands has a fascinating history!