On September 23, 1913, 99 years ago today, Roland Garros, the famed French aviation pioneer, flew across the Mediterranean Sea in what was the first successful crossing in history.  He spanned 453 miles, an amazing feat given the technologies of the day.  Today’s story is reported exactly as it was carried in the Aero Club’s newsletter, “Flight”.  The final week of month included a section entitled, “Foreign Aviation News” that carried word of Garros’ incredible feat — a trip that required seven hours and was the equivalent of Louis Bleriot’s crossing of the English channel 20 times over, non-stop.

We could do no better than to simply preserve the tone and style of the original author.  So imagine yourself reading the story in 1913 as you sit in your leather chair beside the fireplace in the library, your pipe in hand.  Outside, your formal garden is steadily bathed in a cold autumn rain.  This is England.  Ah yes, the Aero Club newsletter has arrived.  “Chauncey, some tea please — would you so mind?”

Flying Across the Mediterranean.

TUESDAY last saw Roland Garros achieve his ambition of flying across the Mediterranean from France to Africa. He arrived at St. Raphael on Monday, and in view of the favourable state of the weather at once set about completing the arrangements for making the attempt at the earliest possible moment. 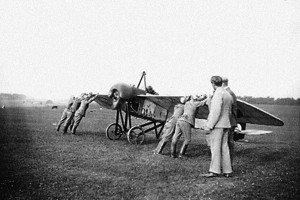 Owing to the distance which had to be traversed, Garros intended to come down at Cagliari, the capital of Sardinia, in order to fill up with petrol, but, as a matter of act, he was going so well that he passed this point at a great height. Leaving the Frejus Aerodrome at St. Raphael at 5.45 a.m., and steering straight across the Mediterranean, over Sardinia, had made a safe landing in Bizerta, in Tunisia, at 1.45 p.m. The distance between the two points is about 460 miles, and after his eight hours flight there still remained in the tank 5 litres of petrol.

So confident was Garros in his Morane-Saulnier machine, which had an 80 h.p. Gnome engine and Chauviere propeller, that he did not deem it necessary to accept the Government’s offer to be consorted by a cruiser, but the French naval authorities nevertheless took the precaution to have a number of torpedo boats cruising along the line of flight.

One of the first telegrams of congratulations received by Garros was from the Premier, M. Barthou. Later in the day on Tuesday, Garros restarted from Bizerta to fly to Tunis, but owing to darkness he was compelled to land at Protville some 15 miles short of his destination. The next morning he went on and reached the Kassar Said Aerodrome, where his machine was immediately dismantled for return to France.

(We wish to express our thanks to the Aero Club for allowing us to reprint the original story.)

Roland Garros is more famous for two other reasons — first, in the modern day, his name is associated with one of the world’s leading tennis tournaments; and second, he was an ace pilot for France in the early months of the Great War (1914) and pioneered the use of a small metal plate so that he could attach a fixed, forward facing machine gun on his aeroplane.  The idea was a revolution — to aim the gun, one aimed the entire plane at the target.