“Shall I try again?” asked Bill Ritchie over the radio.  The two XF-84E Thunderjet fighters had both been fitted with an experimental refueling probe system in England.  They were in a loose formation near the KB-29 as the planes pressed ahead on the first attempt to fly non-stop across the Atlantic Ocean from the UK.  Yet now, Ritchie’s system had developed a fault during the previous inflight refueling from a Lincoln flown by the RAF.  Without enough fuel to make it to Newfoundland, he had hoped that the next refueling would somehow work. 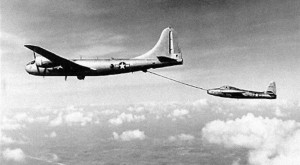 “Have you got enough fuel to reach land now?” Col. Dave Schilling asked.

“Ritchie, there’s a lot of water down below,” cracked Col. Bill Bacon over the radio from the KB-29.  Bacon’s plane had all the fuel needed, but with a broken refueling probe on Ritchie’s F-84, it seemed quite doubtful that he would make it.  The best they could hope for would be that he would be able to bail out over land.

Bacon’s plane was the first air refueling conversion of the WWII era B-29 Superfortress — indeed, everything about the mission was revolutionary.  Such operations were risky, without doubt, yet they were the only way to truly push the limits of what was possible.

The two Thunderjets had set out from RAF Manston in the UK.  This was to be the first successful transatlantic crossing by jet fighters — a venture made possible with the new drogue and probe refueling systems pioneered by the British firm, Flight Refueling, Limited, and by the visionary leadership of Col. David Schilling, American ace fighter pilot and a natural combat commander.

Schilling made a command decision — “If you try again and miss you’ll be in the ocean.  Don’t try it.”

So they flew on — secure in the knowledge that an open water ditching of a XF-84E Thunderjet would have ended badly with rescue far away.  At least now they had a chance for Ritchie to make it to land.  When the fuel ran out, Ritchie was still 130 miles from Goose Bay.  At 43,000 feet, he had a chance to glide in — or so they hoped.  However, quick computations showed that he would fall short of a dead stick landing at the airfield.  Just five minutes more fuel and they would have made it.  It was a long glide ahead. 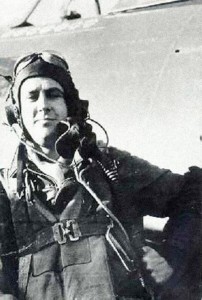 He crossed the coast and continued on.  When the Thunderjet hit 3,000 feet, he ejected over a light forested area.  His chute opened perfectly and he watched as his plane flew down into a crash.  Without fuel, there was no fiery explosion on impact.

This was Fox Able Four, the first first nonstop transatlantic flight of a jet fighter — two had set out, but only would make it, piloted by the famed ace and renowned combat commander Col. David Schilling.  He would fly on alone and land at the USAF base at Limestone, Maine.  The flight had taken 10 hours and 1 minute to complete, with multiple aerial refueling intercepts along the way — the first refueling off the coast of Scotland, the second over Iceland (both of these from British aerial refueling tankers) and then Col. Bacon’s KB-29.  Overall, the operation was not bad for a fighter that had a two hour normal endurance and, at best, a 900 mile range.

It was September 22, 1950 — 62 years ago today in aviation history.  Schilling and Ritchie had pioneered the first non-stop flight across the Atlantic Ocean.  A lot of lessons had been learned.  Within a few years, transatlantic crossings by jet fighters would become commonplace, giving the USAF the means to rapidly deploy stateside combat air power to Europe on short notice for the first time.

Just one year later, Col. Schilling would lead an entire squadron of F-84s equipped with the new aerial refueling probes across the Pacific Ocean, in part island hopping, sometimes refueling in the air.  Only one plane didn’t make it — and the problem had nothing to do with the refueling; the engine had blown up in midair, killing the pilot.

Schilling’s aerial refueling operation was a revolution — and a method that is still employed today.  Col. Schilling was awarded the Harmon Trophy in 1951 for his feat, marking him with the title of the best pilot in the world for the 1950 year.  Five years later, in 1956, he would die in an auto accident — a man that the enemy had never been able to shoot, one of the best combat commanders in USAF history, and an ace with 22½ kills against the Luftwaffe from during World War II.

Ask most any aviator and even many aviation historians which aircraft was the most effective bomber during the Korean War and they will likely guess that it was the B-29 Superfortress.  They would be wrong.  It was the lowly F-84 Thunderjet and later variant, the Thunderstreak.  While a rather poor performer in aerial combat, it more than proved its worth as a fighter-bomber.  In all, it destroyed 60 percent of the ground targets bombed during the Korean War, flying an incredible 86,408 missions.  It dropped 55,586 tons of bombs and 6,129 tons of napalm according to USAF records.  It also fired countless rockets at North Korean forces during the four years of intensive conflict on the Korean Peninsula.  It never shed its derogatory nicknames of “The Hog”, “The Lead Sled” or “The World’s Fastest Tricycle”.  It could use every inch of any runway in the world just to take off.

The F-84 served on two USAF flight demonstration teams — what were the names of the two teams?