“Geoffrey,” Charles Davenport called, “bring the copy of Flight to the library if you would be a good man!”  In short order, the “First Aero Weekly in the World”was brought with tea.  And so we begin this week’s article recalling the grand days of 100 years ago when the Aero Club’s publication of its Issue No. 198 (No. 41, Vol. IV) of Flight.  And so, turning to the first article of interest…

“Thanks to the ‘miraculous’ escape from death of an Eastbourne flying pupil, safety helmets are very much in the air just now in the literal sense of the word.  It is surprising how many different helmets there are already in existence, and we give sketches and particulars of three of these….  Both the Warren and the Roold helmets, which we illustrate, have great shock-absorbing properties, obtained respectively by the use of steel springs and of an amalgam of cork, fibre and gutta-percha….  The other helmet shown is sold by Messrs. Gamage, of Holborn.  It has a sheet steel casque, padded with felt, and is fitted with thick felt paddings around the brim.  It has considerable power of absorbing blows, due entirely to the felt padding.” 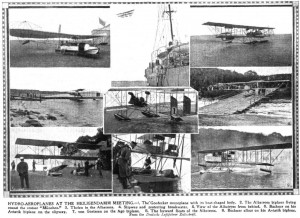 With the dangers of aviation, thought Davenport, such things as helmets are a welcome addition to the aviator’s kit. Still, what use is a helmet when falling from high up?  He flicked to the announcements section and read a recap of the September accident of Lieut. Hotchkiss.

“Lieut. E. Hotchkiss, with Lieut. C.A. Bettington as passenger, flying on a Bristol two-seater monoplane fitted with an 80-h.p. Gnome, left Larkhill, Salisbury Plain, at about 7.2 a.m. on September 10th, 1912, to go to Hardwick, near Cambridge, in connection with the Army Manoeuvres. When over Port Meadow, Oxford, at a height of about 2,000 ft., the aircraft was observed to be planing down in a normal manner.  At a height of about 500 ft., the angle at which it was descending became very steep, and at about 200 ft. the fabric of the right wing appeared to burst and tear away in pieces.  The aircraft then fell straight to the ground.  The aviator and his passenger were both killed instantaneously.” 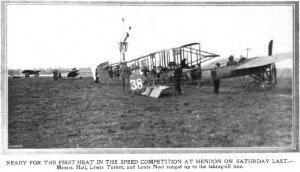 There it is, he thought, just what I was thinking.  The safety of these machines is hardly assured, even with a helmet, though the experience of it, of flying, that must be truly something.  Davenport looked out the window at the gathering clouds — probably a bit of rain, he considered.  He flipped to read the week’s news from Hendon.

Flying did not start Thursday last week until quite late in the afternoon, when Raynham had out the Flanders monoplane, which had been at the ground exactly a week.  A considerable wind was blowing, but without any ado Raynham took the air and made two or three remarkably steady circuits, apparently well throttled down.  Slowly rising to a height of about 200 ft., he then set off at a great speed for Brooklands.  Exhibition flights followed by Noel, Turner and Desoutter, and the rattle of a Green engine from the far end of the ground announced the advent of the Sonoda biplane, piloted by Meredith.  This pilot executed several straight flights, making excellent landings, although the machine was exceedingly cabre at times.  However, conditions were considered good enough to attempt a circuit, which effort, unfortunately, ended in disaster.  It appeared to the writer that, contrary to the habit of most machines, this biplane tends to head into the direction of the wind, instead of edging up face to it, so that the first two turns were accomplished with comparative ease.  It was when flying with the wind directly towards the old Ewen sheds that the difficulty arose.  Meredith seemed to be unable to turn her sufficiently to keep with the borders of the aerodrome; consequently he essayed a sharp turn in order to get back, this resulting in a side-slip and a dive, the machine finishing up with her nose in the air in a field at the back of the Lymph Laboratory. 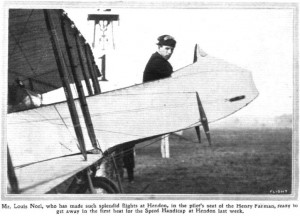 Hmm, thought Davenport, it is a rather bad bit of luck that.  It seems this issue is replete with the foibles of aeronautics and accidents. Well, there was the race at Hendon, of course, with its gay pylons for the pilots to navigate.

“Early in the afternoon Lieut. Parke arrived on the Handley Page monoplane, the exhibition proceedings being opened at 2:55 p.m., by Lewis Turner, who made a ten minutes’ flight on the Howard Wright type G.W. biplane.  A new Grahame-White pilot, Marcus Manton, made his debut with a couple of straights and two circuits, flown in excellent style on the school Farman, despite unmistakable signs of engine trouble.  Hall was next out on his new Blériot machine, followed at 3.18 p.m., by Noel, who was up for 9 mins. on the 80-h.p. Gnome-Henry Farman….

“Just before the start of the race Mr. Grahame-White arrived on the 70-h.p. “Wake up England” Henry Farman.  He had returned from Cassiobury Park Golf Course whether he had conveyed a friend of Miss Maxime Elliott during the morning.  Turner, the limit man in the speed handicap, got away at 4.10, followed by Noel and Hall, the latter narrowly escaping a serious spill through “stalling” his Blériot by trying to rise too fast, with the engine running none too well….

Noel and Hall both did quite well, but neither approached to the accuracy of Turner, who has a peculiar and original way of hurling his bombs out sideways at the target.  Pickles on the Caudron, who would have been second, was unfortunately disqualified for competing below the minimum 300 ft. altitude.”

So Turner had won then.  A fast machine.  He flipped to the news about dirigibles — two items caught his eye.

A New Scouting Dirigible.
The new baby dirigible designed by Mr. E.T. Willows, specially for naval scouting was tested at Farnborough on Tuesday.  This design is generally similar to that of the dirigible with which Mr. Willows made his trip across the Channel, the car being suspended from a transverse beam slung beneath the envelope.  Only a pilot and an observer are carried, and in its trials the dirigible showed itself capable of a speed in the neighbourhood of 50 miles an hour.

The German Naval Zeppelin.
The Zeppelin cruiser built to the order of the German Admiralty had her first trial at Friedrichshafen on Monday last.  On the first opportunity she will attempt a voyage of two hours’ duration, which was one of the conditions of her acceptance by the Navy.  A machine gun is to be fitted to the airship, which will, of course, also be equipped with wireless telegraphy.  Three motors are fitted, each of 170-h.p. and driving two propellers, one pair of which is arranged in the fore part of the vessel while the other four are grouped aft.  A kitchen is fitted up on the airship, and the heat in the exhaust from the motors is utilised or cooking purposes. 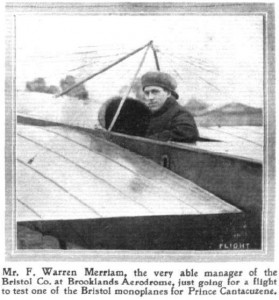 As Davenport considered the news, he realized that with a kitchen in the control car the German Zeppelin must be designed for far more than just two hours of flight.  That it was fitted with a machine gun was equally disturbing.  When the first monoplane crossed the Channel, it was clear that the era of Britain’s protection by control of the seas was coming to an end.  And now this.  Let us only hope, he thought, that one day the iron dice do not roll as if there is to be war, it will likely be a terrible thing with forces involved on land, at sea and now even in the air.  It was far more pleasant to think of other things.