For the USA, the war was less than a year old.  Every aviation company in the country was engaged building new aircraft for the US Army Air Corps and the US Navy.  Amidst the massive development effort, there was one aircraft that was more secret than any of the others — America’s first jet fighter, known as the Bell P-59A Airacomet.  Despite the potential of jet engines, the Airacomet was something of a dog in the air, not very maneuverable, heavy on the controls and prone to failures with its American-built jet engine, a copy of the British engine called the Power Jets W.1.  In April 1941, while on an exchange visit, General “Hap” Arnold had witnessed Britain’s first jet flight, the Gloster E.28/39.  It seemed to General Arnold that the future might well be one of jet fighters — and so he brought the plans home to America for research and development and an engine arrived a few weeks before Pearl Harbor.  What followed was a rapid development program that gave rise to America’s first jet fighter.  On this date in aviation history, October 1, 1942, the P-59A Airacomet made its first flight — and it was not by plan, but rather by accident. 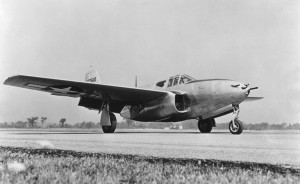 So Secret it had a Propeller

General Arnold contracted with the Bell Aircraft Corporation to develop an airframe around the new power plant while simultaneously, he turned the plans over to General Electric to develop an American version. In both cases, the companies became early pioneers in jets and jet aircraft — a leading position that GE retains to this day. Yet in those days, these early turbine power plants were anything but reliable or powerful. They were heavy, cantankerous and difficult to maintain. Sometimes, they would lose a fan blade, flame out or even explode. Nonetheless, the program pressed forward.

On September 12, 1942, Bell’s design was completed, the new GE engine mouted and the first aircraft was put on a rail car for a seven day haul to Muroc Army Air Field (which is today called Edwards AFB) where it would undergo extensive testing. To ensure that it didn’t attract attention, a fake propeller was affixed to the nose. Even at Muroc, between flights the propeller would also be fitted so that a casual look wouldn’t attract too much attention. Thus, the first jet had a propeller after all, though it was a fake one that was removed before each flight! 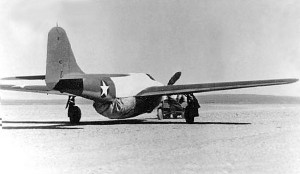 On arrival at Muroc, with the fake propeller still fitted to the nose of the aircraft. Photo Credit: USAAF

A First Flight of Dubious Nature

By the end of September, the P-59A Airacomet was nearing readiness for its first flight tests. Extensive ground handling and taxi tests had been accomplished over the previous few weeks. Finally, high speed taxi tests were logged to test the engine performance, temperatures and aircraft handling at higher speeds while on the runway at Muroc. Finally, on October 1, a high speed taxi test was planned at the hands of one of Bell’s own test pilots, Robert Stanley.

Once out on Muroc’s runway, Stanley pushed the throttle forward for the run-up, released the brakes and began the long acceleration roll. As the plane neared the maximum test speed, Stanley retarded the throttle, but the engine response — as with all early turbine jets — was abysmally slow. Instead, the plane accelerated just a little bit more and, much to the surprise of Stanley, suddenly lifted off. Flying a few feet off of the ground, he waited to bleed the speed off and spool down the engine — it was just a few seconds before the plane touched back down, but Stanley had logged the plane’s very first flight.

The following day, on October 2, 1942, the Army’s own test pilot, Colonel Laurence Craigie, took the plane out for its first “official” flight. It performed admirably (just as it had for Stanley the day before) and Col. Craigie logged it as a successful trial, testing various features of control at various speeds before returning to land. For Col. Craigie, however, the first flight status was dubious — he knew that Stanley had logged the take off the day before. Such things could never be ignored and a first was a first only once, after all.

As the formal test flight program advanced, a follow-on contract was issued to Bell for an additional 80 aircraft. The planes were formally designed as P-59A Airacomets. Nonetheless, the testing program was showing shortcomings in the design. Chief among the aerodynamic problems was a lack of stability in roll. Throttle response was very delayed. To address power plant problems, an improved jet engine was developed and the Bell Aircraft Corporation was asked to produce a P-59 variant, designated the P-59B Airacomet. Despite more power, the plane was still a dog. The USAAF elected to avoid deploying it into combat. Instead, a special organization was formed to test the plane — the 412th Fighter Group. Activated on November 29, 1943, the group was equipped with an armed version of the P-39B with a 37mm M4 cannon and three .50 cal machine guns. 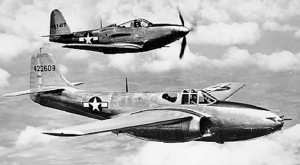 Among the pilots who flew the aircraft was Chuck Yeager, who would go on to pilot another the Bell Aircraft Corporation’s designs, the Bell X-1, in which he broke the speed of sound in October 1947. Yeager described the Airacomet in quite negative terms — in fact, the P-51D Mustang was superior all respects. Before the program was cancelled, 20 P-59As and 30 P-59Bs were built. The original order for 80 aircraft was never fulfilled.

By the time of the Korean War, only a handful of the original P-59A and P-59B Airacomets were still in existence. The Airacomet had long been superseded by improved designs, among them the Lockheed P-80 Shooting Star, one of America’s greatest early fighter jets. Some were used for ground target practice, others as gate guardians and still others were simply dismantled. Today, you can still see America’s first jet fighter at the National Museum of the USAF at WPAFB and at the Smithsonian’s National Air & Space Museum in Washington, DC. 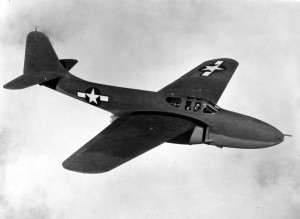 A&E produced a video comprised of early file footage of the P-59A Airacomet:

One of the first few P-59A Airacomets was exchanged with the Royal Air Force for their first jet, the Gloster Meteor I.  The British found the Airacomet to be inferior to their own early jets while the Americans found that the British plane had a number of interesting developments that could be applied to future jet fighter designs.  The Bell P-59 Airacomet proved that American industry could master jet design.  Thus, even if it never flew a day of combat, it was one of the most influential early aircraft in US aeronautical design history.

The British, Americans, Italians and even Japanese developed jet fighters and bombers during World War II, yet only Germany flew them in combat where they proved to have qualitative advantages over anything the Allies had in the air.  What was the Luftwaffe’s first jet fighter aircraft?


If we’re looking at “jets” then the Me 163 Komet would qualify as the Luftwaffe’s first jet fighter as that was a jet aircraft, although a rocket powered one. If considering air-breathing jets, or turbo-jets, then that would be the Me 262. Interesting to note that Heinkel’s private venture submission for a jet fighter, the He 178, first flew in August 1939. Nothing came of it.