The Humming Bird at Lympne

On this date in aviation history in 1923, the de Havilland DH.53 Humming Bird made its debut.  Designed specifically for the Daily Mail Light Aeroplane Competition of 1923, the DH.53 was to be flown in the competition by Capt Geoffrey de Havilland himself.  The competition was chiefly sponsored by the Duke of Sutherland with a purse of £500, arranged through the Royal Aero Club.  The rules clearly favored light civilian designs, including that the planes should be able to be wheeled through a “standard gate” that measured just 7 feet and 6 inches in width, and then pushed along for 2 miles over a country road by no more than two men.  The Daily Mail offered £1,000 prize for an aircraft with a 750 cc or less engine size that was capable of achieving 50 miles of flight.  Others soon joined in sponsoring related achievements, such as altitude and speed and, despite the bizarre rules, as the prizes offers multiplied, so did the number of entrants.  In the end 28 new aircraft designs signed on, though a few did not make the event.  As for the DH.53 Humming Bird, it won nothing — and yet it also won what was really the most important thing at the same time….

The Royal Aero Club reported on the event breathlessly with classic British phrasing:

The first meeting for light aeroplanes to be held in Great Britain has come to an end and some very remarkable results have been attained.  The weather throughout was none too good, otherwise the figures for mileage per gallon, speed, number of circuits completed, and altitude might read even better than they do….  Most people believe that these light machines, fitted with motorcycle engines, might fly after a fashion, at any rate in a calm or in moderate winds.  A few inclined to think that they would fly fairly strongly, but nobody, it is fairly safe to suppose, had realised that the low-power aeroplane could fly, and fly very strongly indeed, in winds that were distinctly worrying to large and powerfully-engined craft.

The competition was held at Lympne Aerodrome, a small airfield west of the village of Lympne, situated atop the sea cliffs 3 miles from Hythe, Kent, England.  The Royal Aero Club had hoped that a light glider competition would prove successful in answer to the progress seen at the German glider fields at Wasserkuppe.  The Germans, prohibited from military and more high-powered aircraft development in the wake of the Great War of 1914 had taken to developing glider designs in earnest, which had given the British the idea of ensuring that they too invested in the smaller aircraft class in hopes of developing a safer aircraft.

The natural development will be towards “fool-proof” qualities that will enable anyone with average “hands” to fly light aeroplanes with at least as great safety as that of a motor-bicycle on the roads of today, and probably with considerably greater safety. 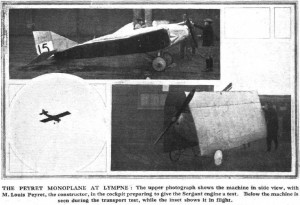 Alexis Maneyrol in a monoplane built and entered by Louis Peyret — Maneyrol would die in the event. Photo Credit: Flight

Sadly, one of the entrants, an L. Peyret Monoplane from France flown by Alexis Maneyrol, crashed in the competition, killing its pilot who had twelve years of flight experience. Maneyrol had taken his little yellow airplane up to 4,200 meters of altitude and actually, as stated by his French compatriots, should have therefore won the competition.  However, on descending, as he passed by the front of the grandstands at 100 feet of altitude, one of his aircraft’s wings folded back and the plane went into a snap spin.  It hit with great force, shattering Alexis Maneyrol’s legs and back.  He died at the scene. 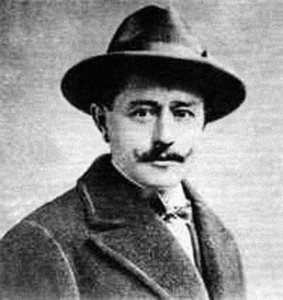 Portrait of Alexis Maneyrol, the French pilot who lost his life in the competition of 1923.

On the matter, the writers of Royal Aero Club’s magazine Flight ignored the grave matter that the Aero Club may have deprived Maneyrol of his final altitude record and the award of the prize money for his family.  Instead, the French crew reported, the British confiscated the barograph record from the plane as an incomplete flight and chose to give the prize to a British pilot, thereby claiming a British sweep in the event.  In the end, they published a highlight that the public would have come away without faith in the small airplanes after Maneyrol’s crash had it not been for a better demonstration by de Havilland’s aircraft, in this case flown by his other pilot, Capt. Broad:

From the latter point of view the performance of Capt. Broad in looping, rolling, and generally “stunting” the D.H. monoplane, No. 8, after the regrettable crash of Maneyrol, is to be commended, as it provided an excellent demonstration of the strength and manoeuverability which it is possible to provide in a machine of the light ‘plane class without sacrificing other qualities.  We are not in favour of “stunting” for its own sake, and have frequently condemned it in Flight, but an inexperienced pilot might very easily inadvertently get his machine into a position in which exceptional stresses were thrown on the structure, and it is well that a skilled pilot should ascertain quite early in the life of a type whether or not the calculated strength is really there.  This Capt. Broad effectively did, and thus must done a great deal, much more probably than can yet be realised, to prevent from taking root among the spectators present any idea that a light aeroplane is necessarily a flimsy affair. 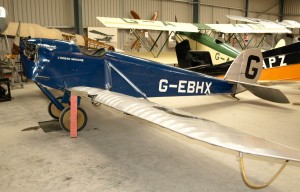 The DH.53 Humming Bird, painted in its original colors at shown at the Lympne competition in 1923. Photo Credit: Nimbus227, of the machine at the Shuttleworth Collection, September 2008

As happened, Geoffrey de Havilland did not come away with any prices at the event, though his aircraft did catch the attention of the Royal Air Force, which had sent observers to the field.  The looping and rolling of a small plane was of significant interest to the RAF, which foresaw that it might make a very good training plane and allow its pilots to stay current and build experience at a fraction of the cost of their larger aircraft.

The de Havilland machines, although not securing any prizes in the competitions, proved themselves extraordinarily airworthy, and have the distinction of being the only light ‘planes to be looped and rolled, thus proving that it is possible to provide adequate strength even in these small machines. 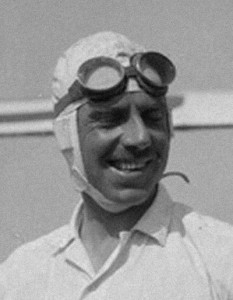 In the end, the DH.53 Humming Bird achieved a far better goal for de Havilland than a £500 or £1,000 prize, rather it landed the de Havilland Airplane Co. a contract for twelve of the aircraft and, having established itself with the RAF further, a later contract for the de Havilland Tiger Moth, which went on to train the bulk of all RAF pilots leading up to World War II.  Indeed, the little Humming Bird, which could fold its wings, get pushed through a 7 and a half foot wide gate and down a country lane for two miles, and then fly with excellent fuel economy, had achieved the best goal of all.

The twelve de Havilland DH.53 Humming Birds were sold by the RAF into private hands at the end of their service life.  The prototype was later acquired by the Shuttleworth Collection and was repainted to carry its original moniker, “L’Oiseau-Mouche”, on the nose and its registration of G-EBHX as it had been registered in 1923.  Sadly, this same aircraft crashed at the Military Pageant Airshow at Old Warden Aerodrome near Biggleswade just a few months ago in June/July 2012.  Former RAF pilot and British Airways 777 captain Trevor Roche lost his life in the accident.  The ultimate lesson is that though these wonderful old airplanes are beautiful, flying them is as dangerous today as it was then in the olden days, times before aviation advanced to this current era with its extraordinary safety record.

Who won at Lympne in 1923 in each of the prize categories and what were they flying?