At first, when Arch Hoxsey, one of the pilots at the Air Meet and part of the Wright Exhibition Team, asked former President Roosevelt if he would like to take a flight, the President replied, “No, thank you.  There are enough high-fliers up there already.”  Yet then, sensing the moment and opportunity — he was campaigning on behalf of the Republican Party of Missouri — he reversed himself, tossed off his coat and climbed into one of the Wright Model B machine’s two teardrop shaped seats.  Being older, he had some brief trouble getting between the wires and front struts of the forward elevators.  As the engines started, he told the President, “Hold on tight to the railings as I don’t want you falling out.”  Indeed, there were no seat belts in such early aircraft. 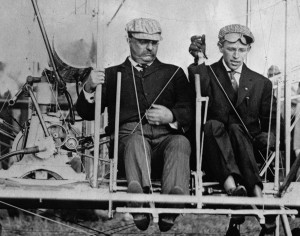 President Theodore Roosevelt in the right seat, with Arch Hoxsey in the Wright machine as they prepare to take off. Photo Credit: National Park Service

Yet Arch Hoxsey had more in mind than just a typical smooth, flight — he intended to have a bit of fun and show “Colonel Roosevelt” a thing or two….

“The aeroplane sped quickly around the field at a height of less than one hundred feet. It made the first lap of a mile and a half before news percolated through the crowd that Mr. Roosevelt was Hoxsey’s passenger. When he swept past the grandstand he leaned forward a bit and waved his hands. The spectators seemed frightened and remained silent, watching the aeroplane intently.” — The New York Tribune, October 11, 1910

As it happened, it wasn’t President Roosevelt who had been surprised, but rather Arch Hoxsey who was shocked when the President had leaned forward to let go with one hand and wave to the crowd.  As the newspapers reported the next day, “Hoxsey was afraid he would fall out or interfere with the engine, which was roaring at his side.”  Hoxsey pressed on — shouting a few words of safety advice with Roosevelt as he circled back around.  In fact, it seemed that the President was having a grand time, though, as the newspapers reported, on the ground, the crowd stood in shock, worried to absolute silence for the entire three minute flight.  Thus, today in aviation history, former President Theodore Roosevelt, with his trademark manacle and mustache, became the first American head of state (sitting or retired) to fly in an airplane. 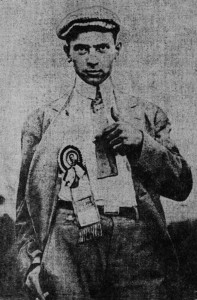 Arch Hoxsey, a flyer with the Wright Exhibition Team.

For Roosevelt, a well-known adventurer, hunter and sportsman, the thought of flying aloft in a contraption of wood, wire and fabric, wasn’t a frightful thing, but rather just one more great escapade in a life well-lived.  Indeed, he may have been one of the most adventurous presidents America has ever had — the story goes that he was even the first president to go underway beneath the waves in a submarine.

Minutes before the flight, the President had arrived in a large motorcade to a small airshow put on in St. Louis, Missouri.  An honor guard of Army soldiers stood by as he waved his hat to the crowds.  Police gathered around to keep the crowds under control — both airplanes and the President attracted a great deal of attention.  Soon the President was out of the car and into the airplane.

“The flying machine sped by and made the turn for the second lap. Hoxsey could be seen to bend over and shout something into Mr. Roosevelt’s ear. The engine cracked regularly, hurling the aeroplane forward at a speed of nearly a mile a minute, but from the ground it looked as though it were travelling much slower because it sailed so evenly and smoothly. There was not a breath of wind, and the engine did not miss fire once.” 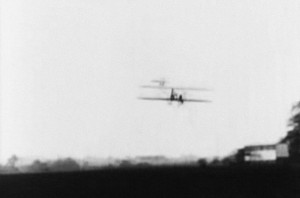 Roosevelt’s third and final steep dive at the hands of Arch Hoxsey.

Arch Hoxsey turned adroitly overhead while the President hung on.  As he came over the field yet another pass, suddenly Hoxsey nosed over steeply toward the ground at nearly a 30 degree angle before sharply pulling up into a steep climb.  Leveling off at the top, the President was light in his seat for a few seconds.  It was quite a ride.  Then Hoxsey circled around again.  For his final pass, not only did Hoxsey do it again, but if anything, he dove even more steeply than before, pitching back up to altitude, whereupon he immediately pressed the nose over again, dipping down steeply before pulling out — this time pulling out at a mere 20 feet from the ground.  He zoom-climbed back to about 200 feet of altitude and circle around widely for a smooth landing.  A movie cameraman captured the flight for posterity. 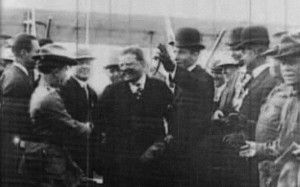 Roosevelt shaking hands and smiling after the famous flight.

After the Wright Model B came to a rest on the ground, the President climbed down into the midst of a large crowd.  He was smiling and soon shaking hands with all of the onlookers.  He had many words to say, including — as the newspapers reported — “It was great! First class! It was the finest experience I have had. I wish I could stay up for an hour, but I haven’t the time this afternoon.”  To top it off, he shouted simply, “Bully!”

It would take another 30 years before another president would fly aboard an airplane.  It would be another Roosevelt, this time the famous President Franklin Delano Roosevelt who, during World War II, had to travel across the Atlantic to meet with the Allied heads of state for negotiations on the conduct of the war and its aftermath.  At the time, the German U-Boats were a deadly threat and were sending millions of tons of Allied merchant ships to the bottom of the Atlantic.  Their brazen nighttime torpedo attacks on the convoys made the run across the ocean a dangerous gauntlet.  Despite the risks of aviation, the likelihood of survival was much better, the convenience far greater, and the speed unmatched.

First, whatever happened to Arch Hoxsey?  Second, two years later, almost to the day after his flight, President Theodore Roosevelt was shot in the chest by the pistol of a would-be assassin.  What were the circumstances and how did the then elderly Roosevelt handle the matter?


Actually, it wasn’t two years later, it was two days later, just before giving a campaign speech in Milwaukee. What did he do? Why of course, he got up on the platform and gave his campaign speech, changing to opening a bit to acknowledge that he had been shot. The bullet passed through his folded up speech and glanced off his gallses case before entering the chest.

The would be assassin, John Schrank, was psychotic and had been stalking TR for some time. He spent the rest of his days in an insane asylum.

Nonetheless, the bullet changed history every bit as much as the bullet that put TR in the White House. It ended his active campaigning, and he just barely lost his 3d party bid to be elected again as President. If he had been able to continue his campaing for the next four weeks, that might have been enough to carry him over the top.


Excellent posting in answer — except for one thing, whatever happened to Arch Hoxsey?


Like many early aviators, his candle burned bright and brief. On December 30, 1910, Hoxley set the flight altitude record of 11,474 feet. He died on December 31, 1910, in Los Angeles, California, while trying to set yet another new record to an even higher altitude.