At 01:00:03 GMT on October 12, 2005, a Long March 2F rocket carrying a Chinese-made capsule called Shenzhou 6 launched into orbit from the Jiuquan Satellite Launch Center in the Gobi Desert, located approximately 1,000 miles from Beijing.  Strapped into the Shenzhou capsule were two men, Fèi Jùnlóng and Niè Haishèng.  For the next five days, they would orbit the Earth, undertaking a series of experiments primarily focused on the effects of space on the crew.  For China, the Shenzhou 6, like the Shenzhou 5 a year before (the first Chinese manned space launch), demonstrated that China had become only the third nation in history to demonstrate the capability to launch men into space.  Whereas Shenzhou 5 had been derivative of Russian technologies, Shenzhou 6 was over 95 percent Chinese-built.  Whereas Shenzhou 5 had carried one man, Shenzhou 6 carried two.  As such, the second flight was a major milestone for China.

Hallmarks of a Chinese Space Program

The Shenzhou 6 launch and orbital mission had all the hallmarks of a uniquely Chinese program.  Whereas Americans in space are called Astronauts, and Russians are called Cosmonauts, the Chinese adopted a different term, the Taikonaut, which is an artful combination of the Chinese language word “taikong”, which means space, and the Greek word “naut”, which means sailor.  Of first look, much of the program looked like both the American and Russian space launches, yet that is misleading — in effect, much of the technology on display is uniquely and absolutely of Chinese origin.

Sadly, the Chinese kept the majority of the details of their Shenzhou 6 flight in secret, not publicizing most details until the mission ended succesfully.  Perhaps this is to ensure that a positive face is kept on the overall program, so as to avoid embarrassment from any untimely failures.  Perhaps it is because portions of the program are related to China’s ballistic missile technologies.  In any case, what is known is that the Shenzhou 6 flight went reasonably well.  Any failures were never published.  In the end, both Taikonauts returned safely to Earth and China declared the entire flight a 100 percent success.

While in orbit, as reported by Reuters (based on Chinese press releases) the Taikonauts prepared and ate pineapple-filled mooncakes, green vegetables, braised bamboo shoots, rice, and bean congee — all dehydrated for easy storage, handling and preservation.  The food was stored in cans and plastic containers that were fitted to specially-designed eating trays.  A small handheld vacuum device was launched as well to use in sucking up any food that might escape to float around in zero gravity.  Finally, a toilet device was launched and tested in orbit.  While such things seem trivial on first brush, in fact, they are critical to the successful future of manned space flight. 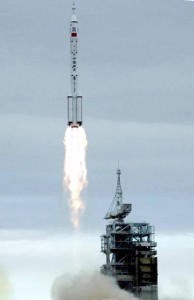 Launch of the Long March rocket carrying Shenzhou 6 into orbit.

For Militarization or Peaceful Goals?

Despite the excitement that many feel toward China’s successful, equally many in the West watch the Chinese space programs with concern.  Teams of intelligence analysts work to assess whether the ultimate goals of China’s space program are more military than civilian and, if the former, what that might mean for security.  This is not misplaced, as the history of China’s ventures into space have been almost entirely born of military concern, rather than civilian goals of exploration.  With that said, it is worth noting that the United States and the Soviet Union both had deeply militarized space programs as well in the early days.

In the 1960s and 1970s, launches of astronauts and cosmonauts took place against the backdrop of the Cold War.  Rocket technologies were developed not for peaceful purposes but rather to develop Intercontinental Ballistic Missiles (ICBMs).  For every Hubble Space Telescope pointing outward toward the heavens, a similar system was typically deployed that pointed Earthward.  For every orbital vehicle and heavy lift rocket, there was an ICBM in the works or a spy satellite under development.

With the end of the Cold War, however, a new era of space cooperation has emerged.  While it would be a welcome sign to see the Chinese join into these programs, this isn’t likely.  In fact, it is the West and Russia, not the Chinese.  The reason is that China continues to support rogue nations like North Korea (which seeks to develop rocket technologies that can attack the USA) and Iran (which is extending the range of its ballistic missiles to reach all of Europe).  In short, the USA and Europe have disallowed any cooperation with the CNSA (China National Space Administration) so as to prevent technology transfers of dual use or military-capable items that might end up in the hands of radical dictators.  While China must then proceed on its own, it has refused all the same to cut its ties with those states.  In the end, they must assume responsibility for their own lonely path into space. 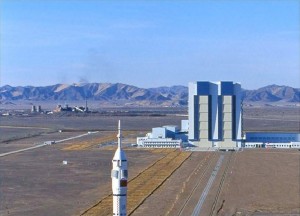 The Shenzhou 6 capsule mounted atop a Long March 2F rocket at its assembly tower in Jiuquan Satellite Launch Center, China.

China’s Next Steps in Space

China has announced an expansive program of future plans for space exploration.  The Chinese have declared their intent to launch a permanent orbiting space station within the next seven to eight years (hopefully by the year 2020).  In addition, the Chinese plan to land a man on the surface of the Moon.  Once that is accomplished, they have stated that they intend to open a permanent, continuously manned station on the Lunar surface.

Finally, whereas the West and Russia have pressed ahead with unmanned exploration on an almost exclusive basis, China is planning aggressively to be the first nation to land a man on Mars and even to the moons of Saturn.  Given the extensive energy and funding invested in the program so far, it seems clear that it is not a question of whether China will go there, but rather when.

One More Bit of Aerospace History

The Chinese have made clear that they view space as the natural extension of mankind’s migration and work.  As stated by one of those involved with the Shenzhou capsule series, Qi Faren, “Carrying out space programs is not aimed at sending humans into space per se, but instead at enabling humans to work in space normally, also preparing for the future exploration of Mars, Saturn and beyond.”  It is an audacious plan and visionary approach, essentially to “normalize” living and working in space.  Only time will tell how successful the Chinese will be.