“The Milan meeting was unfortunate in that not only was the opening clouded by the lamentable death of Chavez, but after a very successful week the closing day was marred by a collision between Thomas, on an Antoinette machine, and Capt. Dickson, on his Henry Farman biplane.  Capt. Dickson during the week had been very popular because of his splendid gliding flights from high altitudes, and on Sunday afternoon, after a glide downwards, he was once more rising when Thomas, who had been flying very high and very fast, commenced to plane down at a fast speed.”

So wrote the reporters for the Royal Aero Club’s weekly, Flight, referring to the events of October 3, 1910, when crowds witnessed the world’s first midair collision between two airplanes.  Though neither man — Capt. Bertram Dickson, nor Rene Thomas — was killed, it was a miracle, all the more so as the two aircraft, fatally entangled, fell together to the ground.  In an era when air traffic control, mandatory separation of traffic, and even the basic principles of “see-and-avoid” were yet to be implemented (or even thought of!) the Milan tragedy struck a chord. 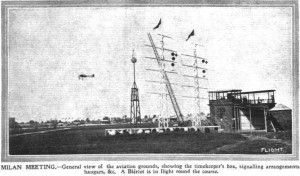 The reports in Flight continued with the story:

He was unable to see Capt. Dickson, and also the noise of his own motor drowned that of the British airman, and to the horror of the spectators the Antoinette monoplane crashed on to the biplane, both machines falling to earth a mass of broken planes and tangled wires.  Thomas escape serious injury, but Capt. Dickson was not so fortunate.  He sustained grave internal injuries, and it was at first feared that he would not recover.  Later reports from Milan, however, indicate that there is now hope that he will pull round, and we know that all our readers will join with us in expressing sympathy for this daring and distinguished British aviator, and hope that it will not be long before he completely recovers from the effects of his accident and is once more amongst us. 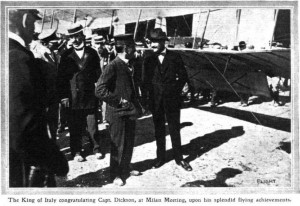 For the public, the collision was a horrifying spectacle and it set into motion discussions about midair collisions and the risks that flyers were encountering from competitions, “stunting” and each other.  Even at this early date, flyers the world over followed the news of each others exploits and read of the crashes, fatalities, injuries and damages in the news and Aero Club reports.  It was a small community and it seemed that most knew each other, having met at aviation meets and competitions either in England or on the Continent. 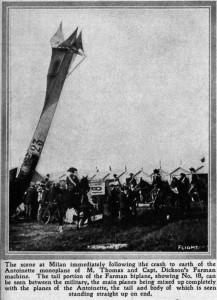 Nonetheless, in the very issue of Flight that carried the news of the midair collision, another writer made a case that parachutes were not necessary for pilots:

The idea of providing pilots with parachutes as a possible source of safety in the event of a mid-air calamity does not commend itself to us, because, in our opinion, the aeroplane itself is inherently the safest form of parachute that the pilot or his passenger can have, and they had much better trust their lives to it up to the last than to abandon their posts, and rely upon an apparatus that might quite as easily ail them in an emergency.  We are very strongly of the view that there is no justification for any mishap in mid-air that is brought about by the structural failure of the machine, for we contend that manufacturers simply must build aeroplanes strong enough to withstand any stress put upon them in flight.

Clearly, even beyond the developments of aviation technologies, an equally important — indeed essential — advancement of theory was necessary.  At 1910, less than a decade since the Wright Brothers had first flown at Kitty Hawk, pilots and manufacturers still had a lot to learn.

Spotted also in the October 8, 1910, issue of Flight was this announcement regarding the formation of a company involved with one of Britain’s most historic airfields:

Capt. Bertram Dickson, the first military officer to ascend in an aeroplane in British history, recovered from the accident in Milan and lived another three years; he passed at Lochrosque Castle on September 29, 1913.  Before he died, he penned a series of reports and letters outlining his predictions about the future military usage of aircraft.  His views, as the world would later learn the hard way, were exactly accurate.  He presaged that initially aircraft would be employed in reconnaissance roles, but that soon thereafter, each side would seek to “hind or prevent the enemy from obtaining information”.  This would lead to battles in the sky for control of air — essentially, he foresaw the emergence of fighter aircraft.  Within the first year of the Great War that began in 1914, Capt. Dickson’s wisdom would be borne out in perfect detail.

What was the first dedicated, purpose-built fighter aircraft and when was its first flight?

3 thoughts on “The First Midair Collision”