Today in aviation history, 50 years ago in 1962, the USAF took delivery of the last production B-52 Stratofortress bomber. The expectation at the time was that the B-52, like its predecessor the B-36, would have a service life of between 10 and 25 years. Instead, 50 years later, the “Big Ugly Fat Fellow”, or BUFF, as they are called, is not only still flying but is expected to continue to fly in the USAF for decades to come. There is even a chance that the last B-52H model will make it to 100 years old — clearly, at Boeing, they built them to last. 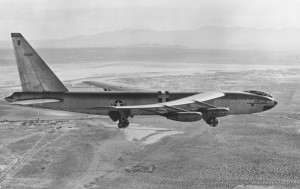 The XB-52 in flight during the early 1950s. Photo Credit: USAF Museum

Highlights of the BUFF’s History

Incredibly, the B-52’s lineage is far greater than 50 years — in fact, that is the date of the LAST delivery, not the first.  The initial contract award dates to 1946, in other words, 66 years ago.  The first B-52 design called for a six-engined straight wing bomber.  As the design and prototype phase advanced, however, a swept back wing was selected and tested on the YB-52, which featured two more engines added outboard to the design.  The initial test flights began in 1952 and it entered service with the first Strategic Air Command squadron in 1955. 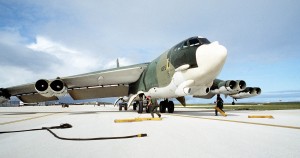 The B-52 is very symbol and personification (if a bomber can “person”-ify something) of the USAF’s motto, “Global Reach”. With aerial refueling, it can strike anywhere on the surface of the Earth. Likewise, the extraordinary impact of a single B-52 bombing run is legendary. The first significant operations involving the B-52 took place during the Vietnam War with such operations like Linebacker and Linebacker II when the so-called “Christmas Bombings” brought the North Vietnamese government to its knees and ultimately brought about the circumstances that allowed the US withdrawal. In that conflict, the bomb runs were largely delivered by the B-52D models, which carried significantly more bombs than the current B-52H models. 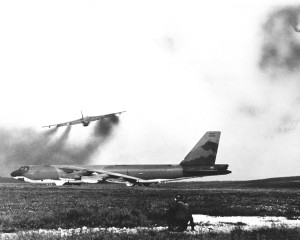 A B-52D Stratofortress aircraft, from Strategic Air Command, leave a smoke trail behind as they take off, one after another, for bombing missions over North Vietnam during Operation Linebacker. Photo Credit: USAF

The next major operation in which the B-52s participated was the first Gulf War following Saddam Hussein’s invasion of Kuwait.  On August 2, 1990, Saddam Hussein’s forces surprised the world when they suddenly occupied Kuwait.  What followed was a five month US and coalition build up that culminated in the beginning of a 45 day air campaign that commenced on the night of January 15, 1991.  Within days, the venerable B-52Hs were flying missions over Kuwait and Iraq from Diego Garcia in the middle of the Indian Ocean.

Unexpectedly, they flew on the deck at altitudes that sometimes reached as low as 100 feet, dodging between anti-aircraft positions and SAM sites to reach their targets, mainly the Republican Guard tank divisions in southern Iraq.  The impact was devastating and soon word spread among the Iraqi troops of the B-52 strikes.   Within weeks, Iraqi officers were defecting southward into Saudi Arabia — one, a general in charge of a Republican Guard division told briefers in Saudi Arabia that he had defected due to the B-52 strikes.  When the intelligence team checked on bombing missions that targeted his division, they realized it hadn’t yet been hit at all.  When queried about that, he said, yes, that’s true — my cousin commands another division and he told me what it was like and I knew it was just a matter of time, so I defected. 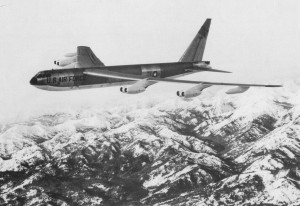 A Nuclear Mission in a Cold War World

During the Cold War, with the SALT and SALT II treaties, many B-52s were parked in the desert at Davis-Monthan AFB and scrapped, their wings being sliced clean through with a heavy metal slab so that the Soviets could verify the decommissioning of the flight via satellite photography.  Naturally, the USAF decommissioned the oldest models and the highest time airframes, planes that had been “flown out”.

In fact, many early model B-52s had flown past their expected service life already given their participation in SAC’s most famous mission, which had begun in 196 and for many years provided a 24-hour airborne force of orbiting B-52s equipped with nuclear weapons.  It was the USAF’s way of showing the Soviets that they could never take out the nuclear force of the USAF and thereby ensure no retaliation against the USSR.  It was the final statement in deterrence and arguably a highly stabilizing mission.

When discussing disarmament, reducing the numbers of weapons in each country’s arsenal, Henry Kissinger famously stated that it was as if two people were standing in a room filled waist deep with gasoline and each had a book of matches — concentrating on reducing the level of gasoline in the room to only knee deep didn’t achieve much, but what mattered was that the two sides were talking and that both sides were rational actors with proven capabilities.  Thus, the B-52 provided the US side’s deterrence throughout the Cold War and enabled the success of the policy o Mutually Assured Destruction (or MAD), which was premised on both sides recognizing the madness of starting a nuclear war. 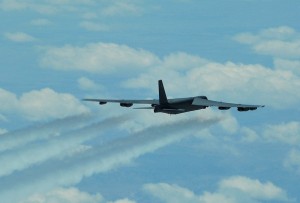 The B-52H models that fly in today’s USAF inventories are a far cry from the original B-52s conceived of in the 1950s.  They are electronic warfare platforms of the first order, with the ability to jam, confuse and even attack enemy air defense through electronic means.  If launched against the most deadly air defense networks, they can still ensure success in strike missions with a new generation of stand-off missiles that are mounted under the wings.  Most weapons stores are no longer carried in the bomb bay, but rather on under wing hard points.  The plane just needs to fly within a CLASSIFIED distance of the target that is known to be more than 1,000 miles distant, and then salvo off six or more air-launched cruise missiles which can carry conventional or nuclear weapons. 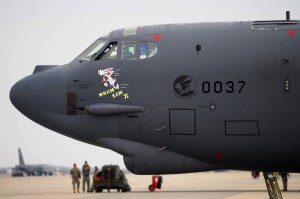 The B-52H Stratofortress even played a role in Afghanistan when they were called into action to bomb the mountainsides in the early weeks of the war eliminate Taliban and Al-Qaeda resistance that was stopping the advance of the Northern Alliance in its push toward Kabul.  The Taliban, highly experienced at facing Soviet air power from the war during the 1980s, were astonished at the level of destructive power that a single B-52 could bring.  They were an essential component of US air power, opening the route to Kabul and destroying deeply dug tunnels in the mountains.

With the B-52, despite its age, the USAF maintains a credible nuclear delivery system, and the plane stands as the key to the third leg of the venerable US concept of the triad — submarine-launched ICBMs, land-based ICBMs, and aircraft borne nuclear weapons.  Today, as the youngest B-52 reaches 50 years of age, long outlasting the oldest pilots in the USAF, it has a certain future as part of the USAF’s arsenal for years to come. Indeed, the flight of the Last BUFF is still many decades in the future.

8 MM camera footage of combat mission over Vietnam in 1968 flown by crew from Kincheloe AFB, Michigan.

One of the least known operations B-52s took on was a dramatic program code-named Giant Lance.  In October 1969, President Richard Nixon and Henry Kissinger conceived of a plan to try to scare the Soviets into ending to their support for North Vietnam by threatening a nuclear war with B-52s.  The President ordered a launch of an entire squadron of B-52s against the Soviet Union, all fully armed with nuclear bombs.  They made no effort to hide their approach and flew straight toward Moscow at over 500 mph (ground speed), but then turned away at the border.  For days, the flights continued, each time turning away on the President’s order.  The Soviets were unnerved and dispatched their ambassador for a meeting with Nixon.

The ambassador reported back from the meeting that Nixon appeared unstable on the issue of Vietnam — this was exactly as Nixon and Kissinger had hoped, thinking that the Soviets would cut of North Vietnam so as to avoid World War III.  Instead, the Soviets didn’t blink.  However, in the early 1970s, it appears that the arms control negotiations that followed may well have resulted from the Soviets’ concern about the stability of the US President.  Thus, in an unexpected way, the open threat of nuclear war may have resulted in the maintenance of peace even if it didn’t end the Vietnam War.  Giant Lance remains a little discussed facet of the history of American foreign policy.  Indeed, the Cold War was a scary time — even more than most people know.

Which general was the original backer within the Defense Department and USAF of the B-52 Stratofortress?


Gen. Curtis E. LeMay….but he was assigned to Europe in 1948 and Col Henry E. “Pete” Warden continued with the development program.


If the projected life of the B-52 fleet is destined to reach many more years would it not be prudent to replace each of the duel engine pods with ONE turbofan? A four engine B-52 would be more cost effective than the current eight engine arrangement. Would require only one flight engineer station, lesser maintenance, greater reliability and a greater range.


Boeing proposed just that. It would increase range by 40% with the newer engines. The AF didn’t want to spend the money.