The Mystery of Enrico Mattei

On this date in aviation history in 1962, one of Italy’s most powerful businessmen, Enrico Mattei, who headed up the largest oil firms in the Europe, ENI (Ente Nazionale Idrocarburi), died in a plane crash when his Morane-Saulnier MS.760 Paris, I–SNAP, crashed in a storm close to the village of Bascapè in Lombardy. Two others on board were killed, including his pilot, the Italian war hero Irnerio Bertuzzi, and a Time-Life photographer named William McHale. The Italian Minister of Defense, Giulio Andreotti, was assigned to personally oversee the accident investigation. He reported a clear cut verdict — it was a terrible loss in bad weather, to be sure, but a storm is a storm…. Thus, the matter seemed settled — or was it? 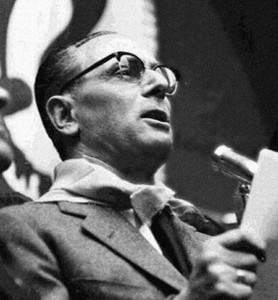 Many might have been happy to see the end of Enrico Mattei, a politically powerful industrial leader who had trespassed on French policy in Algeria, made enemies that spanned Europe and even was declared an obstacle by the White House by the National Security Council. Further, he was reputed to be persona non grata by several of Italy’s top mafia heads. Indeed, he seemed to skate freely around the world making deals, even if they were in direct opposition to the interests of Italy, Europe and the West. He made private oil deals with the Soviet Union, forged new relationships in the Arab world, and worked with the pro-independence Algerian forces against the interests of France.

As a result, for years there were those who suspected foul play in Enrico Mattei’s death. In 1966, a second inquiry was opened by the Italian government, but came to nothing. Suspicion and proof are two very different things and the investigation had found nothing else of interest — at least at that point. 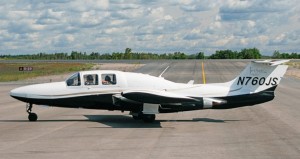 A US-registered MS-760 on the ramp of the Dryden Regional Airport (CYHD) in 2008, the identical type of aircraft that Mattei had been in on his last flight. Photo Credit: Saleen219

Still, 0ne strange detail gnawed at the verdict, the plane was lost in a storm, which implies a certain amount of pilot error — yet Irnerio Bertuzzi was known during World War II as an excellent instrument pilot who had led daring night raids with his torpedo bombers. Was it likely that such a man, flying with a modern aircraft with modern avionics (for 1962), would have made such a mistake to fly into a storm a mile short of the runway? What of ground radar and ground controllers? Had they vectored him into or under a storm cell during an instrument approach? Certainly, that could have been the case, but like so many other issues, it seemed somewhat odd. Further, no air traffic controllers were disciplined….

Thus, questions began to mount almost from the start. The Ministry of Defense in Italy released a report five months after the crash and concluded that the aircraft had been destroyed not in the air, but rather by an explosion that had taken place on the ground just short of the runway at Linate Airport in Milan. This added to the seeds of doubt regarding the official version of events. 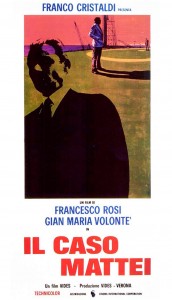 Movie Poster from “The Mattei Affair”, in original Italian.

Eight years after the crash, in 1970, a movie producer began preparations to film “The Mattei Affair”, chronicling some of the mysterious aspects and suspicions regarding his so-called crash. A journalist named Mauro De Mauro was hired to look into Mattei’s last days in Sicily. Just eight days after obtaining audio tape of Mattei’s last speech, on September 16, 1970, while investigating around Sicily, he disappeared. His body has never been found. New questions began to mount — had he uncovered something he shouldn’t have? In 1972, the film was released to moderate reviews.

During this period, Philippe Thyraud de Vosjoli, a former French agent with the Service de Documentation Extérieure et de Contre-Espionnage (SDECE), the French intelligence agency, came forward with new information. He made the extraordinary claim that Enrico Mattei was eliminated by the SDECE due to his moves to take over French oil interests in Algeria — he even fingered an agent named “Laurant” as the man who carried out the operation. Of note, de Vosjoli had earlier been tipped by a Soviet defector that the SDECE was deeply penetrated by Soviet agents — at first, he thought it a joke, but then when things checked out he fled France, he had to flee to avoid assassination. He was given asylum in the USA, which was arranged into the CIA. 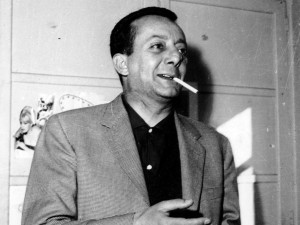 Mauro de Mauro, the journalist who disappeared when he began to investigate the disappearance in 1970.

Others claimed that the CIA on the order of President John F. Kennedy was behind the death because Mattei was supposedly standing in the way of US interests, though that made little sense given the de Vosjoli affair and revelations.

In 1974, the Italian government began yet another inquiry into the matter, responding to public interest and the mounting view that the crash was suspicious. Yet this inquiry too, like the one in 1966, proved inconclusive and was finally closed. 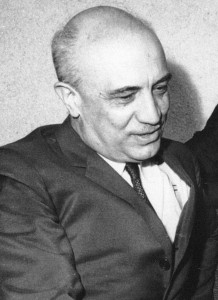 Then in 1986, Amintore Fanfani, a former Prime Minister of Italy, went public with the revelation that the aircraft had been shot down, though how and why was not described. Notably, as Fanfani was serving as the Italian Prime Minister at the time of the crash, so it is likely that he had significant official knowledge of the true facts of the matter.

In the early 1990s, Tommaso Buscetta, an informer on the Italian mafia, made the claim that the mafia had killed Enrico Mattei on the request of the American Mafia, the Cosa Nostra, closely in contact with the Sicilians. Buscetta also claimed that the journalist who had disappeared in 1970 had been killed by the mafia because he was getting close to uncovering the true details of the murders. 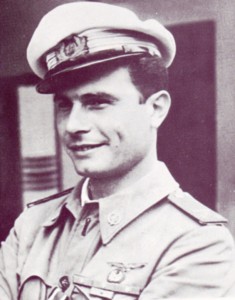 With such extraordinary accusations of foul play, in 1994 the case was reopened a fourth time for evaluation. In 1995, Enrico Mattei’s and Irnerio Bertuzzi’s remains were exhumed for autopsies to be performed. Surprisingly, the conclusion was definitive — the bodies showed injuries and contained shrapnel bits that were similar to those that more likely would have resulted from an explosion on board the plane.

In 1997, a ring and another piece from the plane were examined with modern metallurgy sciences and determined to have stresses from the shock waves of an explosion, conclusively not from a crash. With this new evidence, the Italian government reopened the case as a homicide.

In 2001, it was discovered that for some reason in 1962, the aircraft’s flight instruments had been put in acid and purposefully destroyed at the crash site in the first phases of the investigation. Obviously, that is far from standard practice in aviation accident investigations and this pointed to an official cover-up — perhaps. In any case, many began to wonder just why the Italian Ministry of Defense had been directed to undertake the accident investigation and not the civil aviation authorities. Yet all of this seemed incompatible with the claim of the SDECE’s involvement, nor of the mafia’s supposed involvement, nor the CIA’s involvement, nor…. The list of suspects and claims seemed to be growing with every passing year.

Thus, it seems that today, exactly 50 years to the day after the crash of Enrico Mattei (or was it a shoot down, or bombing, or assassination, or murder, or what?), the world is no closer to understanding the truth of what happened on October 27, 1962. All that is known with confidence is that science doesn’t lie — the metallurgy was conclusive that the crash was caused by an explosion on board. The slivers of metal found embedded in the bones of the exhumed were from metal that showed conclusively to be shrapnel caused by a bomb. And ultimately, the Italian government still retains the matter as an open case of homicide.

Above all, one thing is certain — somewhere out there, someone knows the truth.

The Morane-Saulnier MS.760 Paris is far from a typical corporate jet — in fact, it is more like a fighter trainer with four seats. It was designed and built in the mid- to late 1950s and upgraded through the 1960s. The MS.760 Paris was then pitched for sale to potential buyers in the USA — however, it launched right into the teeth of the introduction of the world’s first true executive corporate jet, the Learjet 23, first of a long line of successful Learjets in the market. It is clear hard to imagine why a man like Enrico Mattei selected the MS.760 Paris as his personal plane — it was fast, reliable and perfect for his war hero corporate pilot — and it was available before the Learjets. Had Mattei survived, would he have bought a Lear? Maybe. Probably….

Why was Enrico Mattei’s pilot, Irnerio Bertuzzi, famous and considered a hero for actions during World War II?