The One Man Czech Air Force

For Sgt. Josef František, a Czech fighter pilot, the past two years had been spent in hard combat against the Nazis.  He had watched the Wehrmacht occupy Czechoslovakia in 1938.  He fought in Poland against the Blitzkrieg in 1939 — even dropping grenades on the enemy when he was temporarily assigned to a reconnaissance unit.  He escaped arrest in Romania then fought for France with a squadron ex-Polish fighter pilots, scoring 11 kills by his own count.  The survivors escaped to England and were assigned to No. 303 Polish Squadron where they flew Hawker Hurricane Mk. I fighters from RAF Northolt.  Once again, the Nazis came.  Once again Sgt. František proved deadly in the air — but also was a serious disciplinary problem on the ground.  Things got so bad that a fellow Czech commander even ordered his arrest for insubordination.

To continue flying, he remained with the Poles.  Where others wanted him grounded, the Poles made allowances out of his respect for his absolute hatred of the Nazis.  While in training, he was prone to engaging in pub fights.  He rarely respected the orders of superior officers.  He refused to fly formation safely, instead wandering around within the flight as he scanned the skies for the Luftwaffe.  Unwilling to ground him, the Poles finally gave him his own plane to use in hunting alone — their only order was to kill the enemy.  Thus, Josef František became a one man air force.  For the next fourive weeks, there was no more deadly pilot in the entire war, on either side.  Yet on October 8, 1940, just one day after Josef František’s 26th birthday, his deadly killing streak came to an end, not as a result of combat, but rather by his own doing. 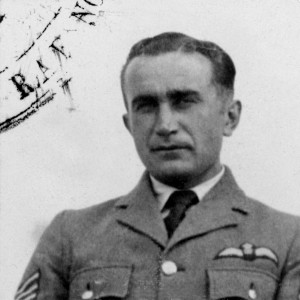 Josef František and No. 303 Polish Squadron came late to the Battle of Britain.  When No. 303 Polish Squadron had finished training in their new Hawker Hurricanes, already the Battle of Britain was past its peak.  Incredibly, even if the RAF was suffering from a shortage of pilots, the command wasn’t confident that No. 303 could perform.  Thus, they were delayed from entering the fight and ordered to fly training flights and patrols far away from the battle area.  Finally, on August 30, 1940, the Poles took their training flight off course and intercepted a German bomber, downing it in flames.  The next day, the RAF relented — and immediately No. 303 Squadron took off on their first combat mission.  They would down six German planes while suffering no losses of their own — and they flew three missions that day.

Josef František’s first kill in England was scored in this Hawker Hurricane Mk. I, RF-U, with the No. 303 Polish Squadron.  During September 1940, he would score four kills in this aircraft.

For František, his first kill came two days later on September 2.  He located and swooped down to destroy a Luftwaffe Messerschmidt Bf 109E.  He would take off with the Polish squadron but as agreed, once in the air he would turn away and fly alone.  His strategy was simple — he would fly into the lower part of Kent, over which he surmised that damaged Luftwaffe planes retreat after the fight on their way back to their home airfields in France.  František would climb above and orbit, waiting to pick off the stragglers.  It wasn’t long before damaged planes and exhausted enemies, low on fuel, started to make their way over Kent, hoping to escape southward over the English Channel.  František became a deadly hawk, choosing his wounded prey and diving on them in a single, deadly attack that sent them down in flames.  It was a sound and deadly concept.  On September 3, he downed another plane, setting up the beginning of a deadly streak.  Sometimes, he would fly with the squadron into battle, while other times, he would peel off and fight his own war — it was a choice the Poles allowed and one that paid off huge dividends. 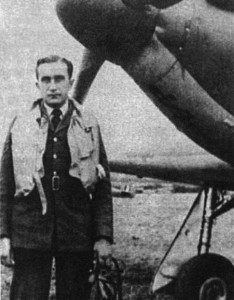 Josef František posing in front of the nose of one of the 303 Squadron’s Hurricanes.

Over the next four weeks, often using this strategy of flying alone along the line of the enemy’s likely retreat, Josef František engaged and shot down 17 enemy aircraft.  Perhaps he downed an 18th, as he was awarded a probable kill on September 30.  Nine of his opponents were Messerschmidt Bf 109Es, the rest were bombers, a mix of Ju 88s, He 111s and Bf 110s.  On September 30, he was awarded the RAF’s Distinguished Flying Medal after receiving confirmation of his 17th kill over England.  This brought his combined score to 28 kills against the German Luftwaffe.  Just those 17 kills confirmed over England made him nearly the top scoring ace of the entire Battle of Britain — only two British pilots scored more, at 20 each, yet they had flown constantly for the entire battle, and both were killed in the end.

The Sad End of the One Man Czech Air Force

Above all, Josef František was an extraordinarily gifted pilot.  He was a deadly shot and a calculating killer.  He was motivated by absolute hatred of the Nazis and was deeply aware of their reign of terror in occupied Europe.  As a result, he proved ruthless in the air.  Fighting with no less than four air forces, he had gained experience in many different types of aircraft and had come to know the enemy well.  In the Czech Air Force, he had flown the Aero A-11 and Letov S-328 biplanes and, on being assigned to a fighter regiment, he flew Avia B-534 and Bk-534 fighters.  In Poland, among other types, he flew the Potez XXV, Breguet XIX, PWS 26, RWD 8, RWD 14 and Lublin R XIII aircraft.  In France, while based at Lyon-Bronand Airfield, near Clermont-Ferrand, he flew a variety of French types.  In England, he mastered the Hawker Hurricane Mk. I.  In each, he proved his mettle. 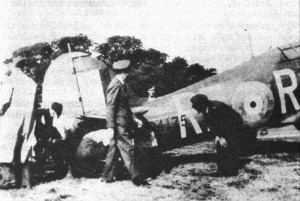 Josef František was killed in this aircraft, RF-R, on October 8, 1940. This photo is from September 6 when he shot down a Bf 109E piloted by Oblt Waller of 3/JG52 — here, the pilots and ground crewmen inspect the damage František took in his combat.  He would score seven kills in this aircraft overall.

In the end, however, it was Josef František’s own ill discipline that ended his life.  Never able to follow orders or respect authority, he was prone to taking risks, even if it did not make sense.  His final flight took place today in aviation history on October 8, 1940.  Put simply, he crashed while performing unauthorized aerobatics at low level.  Stories vary as to exactly what happened and why.  Some say that he was exhausted and simply lost control of his plane — he had flown for nearly five weeks without break, often multiple times a day.  Others claim he was celebrating his victories by doing low level rolls.  Some even have written that he was showing off for a new girlfriend by doing impromptu aerobatics.  Nobody can ever know as he died in the crash.

In the end, all that can be said was that it was most likely that poor self-discipline, not the Luftwaffe, had killed Josef František.  The most efficient, deadly ace of the RAF’s famed Battle of Britain, the One Man Czech Air Force, would fly no more. 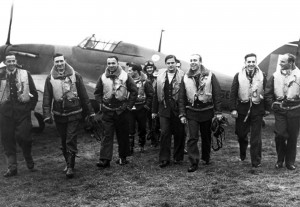 The Polish pilots of No. 303 Squadron in a group portrait in front of one of their Hawker Hurricanes during 1940.

The RAF No. 303 Polish Squadron proved one of the deadliest squadrons in the entire RAF.  While its members were among the last squadrons to enter the Battle of Britain, they ended up as the top scoring squadron of the entire battle.  It wasn’t just Josef František that scored kills.  While British pilots fought for the principles of their nation, the Poles fought for revenge — they had seen what the Nazis had done in Poland and they had received letters and communications from families left behind that contained news of atrocities and horrific acts.  The Polish pilots were motivated in a different way and they were selfless, ruthless and deadly as a result.  Sgt. Josef František scored 17 confirmed kills while S/Ldr (Lt.) Witold Urbanowicz scored 15 kills.  Corporal Antoni Glowacki, Lt. Zdzislaw Henneberg and Sec.Lt. Jan Zumbach each scored 8 kills.  Together, just these five Polish pilots downed 56 enemy aircraft.  In addition, they claimed five more probable kills.  No. 303 Polish Squadron scored 126 kills in all, making it one of the highest scoring squadrons of the Battle of Britain, despite flying only in the final weeks of the battle.

Who were the top two scoring aces of the Battle of Britain?