Paying just one franc apiece for entry to the Grand Palais, Parisians and others who came from far and wide came to the Paris Air Salon to see the latest that their country had to offer, and chief among the attractions was that the French military had made a special effort to put its machines on display.  This article reflects the news report published 100 years ago this week in Flight, the newsletter of the Royal Aero Club of the United Kingdom.

The scene inside the Grand Palais was extraordinary, as described in Flight, the Aero Club’s newsletter:

“The scheme of decoration is wonderfully complete, and highly artistic.  No expense seems to be spared in providing the best possible setting for the machines displayed.  The key-note of the colour scheme is blue and gold.  Blue and white streamers depend from the roof, hiding the crudeness of the steel and glass construction.  Beneath the central dome are eight stands, and above each hangs an elaborate circular pendant bearing the name of the stand-holder.  On either side two large gilt columns rise from massive pedestals, and beyond these are more stands. From the gallery, a very comprehensive view is obtainable of the activity all around.” 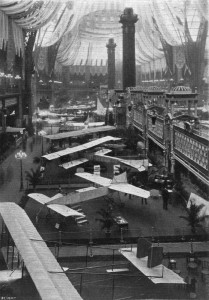 A view down the main gallery of the Grand Palais, showing the vast field of aircraft that had been put on exhibit at the Paris Aero Salon in October/November 1912.

It seemed that no expense had been spared and to prove that point, one Farman hydroplane was displayed in a large indoor pool of water to demonstrate its seaworthiness.  Flight’s editors continued with their breathless report, highlighting the intensity with which the French military had invested in aviation, in stark contrast to the British government’s own seeming lack of formal interest:

“After a complete day of worrying round the Salon, fighting one’s way from stand to stand, the main impression left is ‘What a crowd!’  What enthusiasts the French populace are over their beloved aviation.  The place filled up soon after lunch-time, and by 4 o’clock the paths between the stands were black with people. — Last year’s Salon was somewhat of a revelation for the number of machines displayed.  Then there were something like 43 on exhibition.  This year the number has sprung up to 77, of which about 27 — those machines that are shown in the gallery — belong to the French Army.  They, the French Government, have joined in the proceedings very considerably, quite indicative of the keen attention that they pay to matters aeronautic.  Not only have they lent such a representative collection of their own ‘avions,’ but the French Minister of War has taken a large stand where is displayed a whole battery of Delahaye motor lorries, with bodies specially equipped for carrying large stocks of spare parts.”

The French government display of military aircraft and a convoy of support vehicles for the delivery of spare parts to the field in the event of a downed airplane.

In the very same week as the Paris Aero Salon had opened, the British government had issued its report on aviation.  Of the entrants, it noted, none were truly suitable nor even designed with military purposes in mind.  Nonetheless, the authorities had tested every model to their satisfaction, noting the strengths and weaknesses of each.  In most cases, they deemed the options available to be underpowered.  At the end of the report, the British declared that a 100 hp engine would need to be pioneered within Great Britain, lest the nation fall behind in terms of its aviation arm. 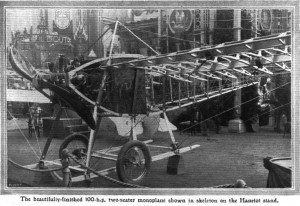 A photograph of a Hanriot machine, displayed without its fabric coverings, and fitted with a 100 hp engine — a special interest of the editors of Flight.

While at the Paris Aero Salon, the editors of Flight made special note of the French capabilities and took pains to point out, with a photo as well, that the French already had an excellent 100 hp option.  The rivalries of the English vs. the French were still very much alive and well, decades after Waterloo. 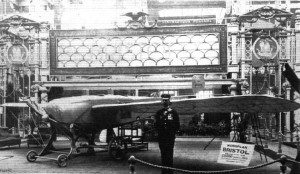 The Bristol monoplane exhibit at the Paris Aero Salon.

The planes displayed included numerous examples of the leading aircraft of the day.  Only two British types were on display, one being the Bristol monoplane, which attracted interest.  The plane’s clean lines bespoke of a certain efficiency that clearly translated into airborne performance. 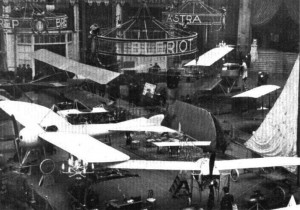 The Blériot display, featuring the new line of aeroplanes for 1912.

Virtually every French manufacturer had its own display and the best offering from each was put on display.  Some manufacturers, like Blériot, were particularly well-received, in large part due to the popularity of the achievement of Louis Blériot himself.  Across the entire Salon hall at the Grand Palais, the exhibit carried an atmosphere of a World’s Fair, rather than an aircraft event.  People responded accordingly, awed by the decorative lamp posts, gold trim and ornate Belle Époque decorations that accompanied virtually every booth.  Bushes and other foliage were brought in such that potted plants graced most of the exhibits.  Even the rope lines to keep the crowds back from the aircraft on display were ornate posts that would befit the great boulevards of Paris and the walkways to the Tour Eiffel.  No expense had been spared. 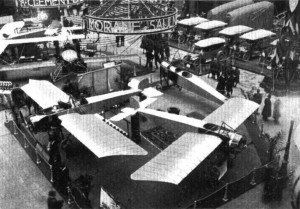 The Morane-Saulnier exhibit had three aircraft on display, one without wings so that it would fit within the limits of the display area.  The Morane-Saulnier type would dominate as the French military fighter of choice in the first year of the Great War — that would start just two years after the Paris Aero Salon would wrap up. 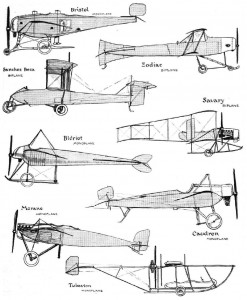 Sketches of some of the various types on display at the Paris Aero Salon.

The Paris Aero Salon would be a watershed event for French (and European) aviation.  It set the standard at a very high mark for airshows that would follow.  Today, the global airshow circuit ranges from Paris to Farnborough and beyond, including to new locations like Dubai.  All of these airshows harken to the days long ago in 1912 when the French set the aviation world on its head with an Aero Salon that dominated the news for months afterward, not just with the breadth and depth of aviation machines on display but of the official interest shown.  Visitors came from around Europe to see the future of aviation and imagine a day when they too could take to the skies. 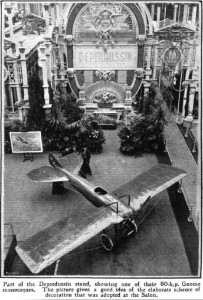 The brilliantly decorated Deperdussin exhibit with ornate bas-relief in gold leaf and foliage as trim.

The Deperdussin Monocoque was an astonishing design and first shown at the Paris Aero Salon.  It would go on to set racing records as the company struggled to establish itself as a leading name in France.  The name Deperdussin, however, would be all but forgotten, except among aviation aficionados, though the company’s full name, the Société Pour les Appareils Deperdussin, which was commonly abbreviated as “SPAD”, would be widely known and, even today, a recognizable marque from the World War I era.

Who (or what) was Scipio?