“The United States Air Force RB-29 of the Ninety-First Strategic Reconnaissance Squadron, which crashed yesterday morning, went down after it was fired upon by two Russian-built MiG-type fighters.  Both MiGs made two firing passes at the reconnaissance bomber, setting it afire.  All eleven crew members bailed out.  The plane crashed on the Island of Hokkaido, ten miles east of the town of Kenebetsu.  Ten of the eleven crew members landed safely on the ground.  The eleventh was found dead.”

Thus read the USAF announcement referring to the shootdown on November 7, 1954, of a veteran RB-29A that was once known as “Tiger Lil” and had flown many missions over Korea during the war.  The newspapers of the day were far more sanguine and ran the headline, “Reds Down U.S. Bomber; 1 Dead”.

The Aircraft and Crew

The RB-29A, tail number 42-94000, was a World War II era Boeing B-29A Superfortress that had been converted for photo reconnaissance missions and assigned to the 91st Strategic Reconnaissance Squadron.  The plane was stripped of its identifying markings and its famous “Tiger Lil” nose art removed.  It was then modified to carry a set of high resolution cameras for photo mapping and recon purposes.  In August 1954, the aircraft was assigned to the 6007th Composite Group, which was assigned to do a variety of reconnaissance and intelligence missions, including for the National Security Agency.

The flight crew assigned to fly the aircraft on November 7, 1954, on a routine photo mapping mission.  The plane was to make three passes over northern Hokkaido to take complete imagery of the northernmost islands of the Japanese nation.  Nearby were the disputed territories of the Kurile Islands and just offshore of Hokkaido, were the contested “Lesser Kuriles”.  The Soviets maintained an active air base at nearby Tofutsu, manned by the 10th Air Army Regiment T5350D. 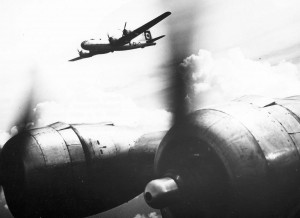 The RB-29 aircraft took off from Yokota AB, Tokyo, Japan, and flew north to Hokkaido to begin its mission.  Meanwhile, a pair of MiG-15s were already circling in the Kurile Islands area on a routine patrol.  Soviet air defense radars soon picked up the approaching RB-29, which was categorized as a “suspicious” aircraft.  Within the hour, the RB-29 was re-categorized as “hostile” — at that point, the attack was but six minutes away.  As the RB-29 flew about 9 miles off the Hokkaido coast, at least 15 miles offshore from Russian territories, a pair of MiG-15s were vectored into the vicinity of the target.  The pilots were told to acquire their target visually.  At the controls were the two Soviet pilots named Kostin and Seberyakov.  Once they had spotted the plane, the ground controller issued the order to attack.

Perhaps to ensure that his voice was clearly heard over the noise of the HF radios (MiG-15s were not fitted with VHF radios), he repeated the command three times.  The two MiG-15s closed rapidly on the RB-29 from below at about 10,000 feet.  The RB-29 was flying at 16,000 feet of altitude. One of the American gunners, A2C Walter Lentz, spotted the two Soviet fighters first and called them out.  The RB-29 turned quickly toward nearby Hokkaido as its Aircraft Commander, Capt. Anthony F. Feith, told his copilot, Lt. David N. Oliver, that he didn’t think that the MiGs would fire.  After all, they were in Japanese airspace and on a regular photo mapping mission.

The MiGs rapidly closed, climbing upward toward the RB-29.  As they closed, they opened fire.  Breaking off, they passed under the plane and did a split-S back down to evade any return fire.  Once clear, they pulled back around for second firing pass.  A2C Lentz spun his gun sight onto the closing fighters and keyed the intercom button and screamed, “They’re firing!”  He requested permission to return fire.  Somehow, Capt. Feith did not issue the order, perhaps being confused or disoriented.  The RB-29 was now well within Japanese airspace and less than 7 miles from the coast.

A second time, the MiG-15s closed rapidly and fired.  This time their fire was devastating as cannon rounds raked the aircraft’s wing and hit a wing tank.  Flames quickly engulfed the wing and engine.  Realizing it would be impossible to make it to Hokkaido, Capt. Feith issued the order to bail out. All of the men were able to clear the aircraft and descended into the water.  However, one got tangled in his parachute lines after hitting the water and drowned before being picked up by fishing boats and other vessels in the area, and then brought to shore.

The ten crewmen were picked up by USAF trucks and taken to Kenebetsu and then flown back to Yokota Air Base, Tokyo, on a C-47 Dakota transport plane.   The crewmen were examined on arrival and determined to be in good health.  Meanwhile, documentation work on the crash site began.  It was determined that the plane, once the crew had bailed out, had descended into the area at Nemuro, Japan, and crashed into an unoccupied house, destroying it.  In a crazy coincidence, Nemuro had been the site of a previous RB-29 shootdown 25 months earlier.

In the wake of the attack, both the US and Japan filed a formal protest.  The Japanese reaffirmed their territorial claims to the islands adjacent to Hokkaido.  At the time, the Soviet Union claimed the islands in an effort to stretch the meaning of the treaty agreements that were signed in San Francisco at the end of the war.  In response to the formal protests, the Soviets claimed that the US and the USSR should live “in peace”.  Naturally, they rejected requests to pay reparations.

At the National Security Agency, the intercepts and ELINT that had been collected painted a clear picture of events.  The radar plots from the Soviet systems were evaluated and it was realized that the Soviets had patrolled the airspace nearby for over two hours before the attack.  It did not take long for them to declare the US aircraft hostile once it flew over Hokkaido. The ground controllers then issued an order to shoot the RB-29 down – repeating it three times for clarity. After the second pass, the bomber flew on for 11 minutes before crashing.  Even after the two Soviet MiG-15s that had fired on the plane returned to base, the Soviets kept fighter cover up in the area for an additional four and a half hours.

With the shootdown of the RB-29 on November 7, 1954, the number of US reconnaissance aircraft downed by the Soviet Union had reached eight.  A total of 50 Americans had lost their lives.  In the years that followed, yet more aircraft would be lost.  Was it worth it?  That will always be hard to say, yet the missions flown were essential in documenting and understanding the true nature of the Soviet threat during the Cold War.  They allowed the US to make accurate assessments of the true weaknesses of the Soviet Union and to be able to manage the challenges the West faced during a very dark and uncertain time in world history.  The men who sacrificed so much and took the risks necessary to achieve that goal are heroes in the true sense of the word.

The ten surviving crew members of the downed RB-29A were:

What aircraft replaced the RB-29 for photo reconnaissance duties with the 91st SRS?