Like all Australians, Professor Frank Cotton of the University of Sydney was apprehensive about the war.  Japan had invaded China and was threatening much of the Pacific, including Australia.  In the meantime, England had just emerged from the hard times of the Battle of Britain.  The United States, while neutral, was shipping vast quantities of war materiel to England.  Its Pacific navy and island holdings appeared strong, yet Japan was likely to emerge as a powerful military force if war extended to the Pacific.  Yet what could a physiology professor and lecturer in the Commonwealth do to assist in the war effort?  His particular expertise involved the study of strain on the human body — and it was thus that he applied his research and skills, after many months of development, to the publication of a paper that introduced the “Cotton aerodynamic anti-G flying suit”, a conceptual garment that could be worn by fighter pilots, thus enhancing their ability to handle the g-forces of hard maneuvering and avoid what was known as G-LOC — g-induced loss of consciousness. 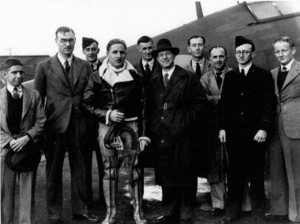 Practical Use and Implementation

While Professor Cotton’s design was intriguing, he was more focused on center of gravity than on blood flow.  This latter point was the key to making a practical anti-g suit that could be worn in combat.  The publication of his paper lead to more experimentation and consideration by others, chiefly Dr. Wilbur Franks, who in the same year developed a working garment that had water bladders that surrounded the body.  This was developed at the University of Toronto in Canada.  The idea was simple — when the pilot experienced Gs in a turn, the suit would pump water into the bladders and constrict the body, forcing the blood upward and helping to ensure that the pilot didn’t lose consciousness. 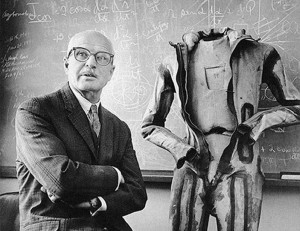 Wilbur R. Franks at the University of Toronto’s Banting and Best Medical Institute with his anti-g suit design, the first to see combat.

His first suit, called the “Franks Flying Suit,” was tight and, with bladders surrounding the entire body, was quite uncomfortable when inflated.  Further testing showed that the suit did not need to be a full body garment, but rather could just focus pressure on the legs and waist, thus keeping more blood in the upper body.  The water system, however, was proving impractical, as it was heavy, cumbersome and hot, making it a very poor match for desert and tropical climates. 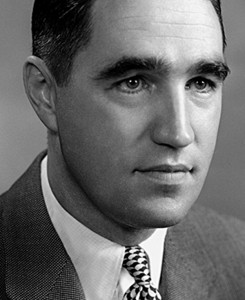 In the USA too, researchers were working at the Mayo Clinic.  A small team under Dr. Earl H. Wood were using a centrifuge to spin up g-forces on test subjects.  In these tests, individuals were fitted into various designs of anti-g suits that were derived from the groundbreaking work by Cotton and Franks.  On Dr. Wood’s team were three other key doctors — Dr. Edward Baldes, Dr. Charles Code and Dr. Edward Lambert.  With each test, improvements were made and the breakthrough was the use of pressurized air to inflate the bladders rather than water.  This made for a lighter, more reactive and quick-acting suit, that was more comfortable to wear.  In addition, Dr. Wood, who often tested the garments himself in the centrifuge, developed advanced g-resisting breathing techniques — these are still in use today and taught to most combat pilots worldwide. 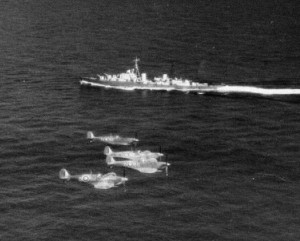 A flight of four Supermarine Seafires of No 807 Squadron in flight — these were the first planes to have pilots equipped with the Franks Flying Suit Mk I in 1942.

Despite all of the advances underway at the Mayo Clinic in the development of the air-based anti-g suit, it was the Franks Flying Suit that would first see combat when on today’s date, November 8, 1942, the first British pilots of the 807 Squadron Fleet Air Arm took off on a combat mission over Oran, Algeria, in their Supermarine Seafires — the naval version of the famed Spitfire.  These were Franks Flying Suit Mk I types.  Shortly afterward, the Mk II was issued for use by US and Canadian pilots, even if the Americans found them to be not that desirable.  Though there is little data to support the claim, it appears that British pilots made effective use of g-suits in their combats against Axis fighter pilots during the remainder of the war.

American dive bomber pilots found the Woods suit from the Mayo Clinic to aid significantly in countering the effects of g loads when pulling out of bombing runs.  The suits issued to Army and Naval aviators were manufactured by the Berger Bros. Company and the Munsingwear Company and were designated as a “Suit-Pneumatic Anti ‘G’ — Specification No C-3231.”  Additionally, another type was acquired through the venerable David Clark Company, Inc., and known as “Suit Type G-3, Spec.#C3231, Order #(33-038) 45-2560-AF, David Clark Co. Inc”.  David Clark Co. Inc. also developed a Naval version designated as “Suit: Anti-Blackout, Type: Z2 Coverall.”  There were also G-3A type suits, a modification of the G-3. 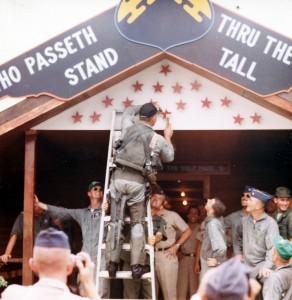 Col. Robin Olds, commander of the 8th Tactical Fighter Wing during the Vietnam War, nailing up one of his MiG kills after a successful mission. He is still wearing his full mission gear, including g-suit — note the leggings. The words above read “Ye who passeth thru these portals stand tall.” Photo Credit: USAF

By 1950, g-suits, as they were more commonly known by that time, were a standard piece of pilot equipment.  With the increased speeds of modern jets and with ever stronger airframes, by mid-World War II, many planes could withstand more Gs than their pilots.  By the jet age, that truth was universal.  Without a g-suit, a pilot might pass out at around 5 or 6 g sustained force in a tight turn.  With a g-suit, that number could be as much as 9 g or even more.  Some pilots, with new developments of body tensing and grunting, are able to routinely handled 9 g, 10 g or even 11 g for short periods.

Today’s g-suits are a far cry from Cotton’s or Franks’ designs.  They operate reliably, effectively and with minimum problems.  They are comfortable and inflate automatically when g loads exceed the first limits.  It is likely that in the future, even more advanced g-suits will debut, though at this point it is a matter of optimizing the engineering rather than seeking great breakthroughs. 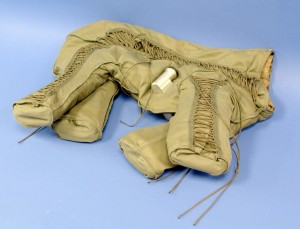 G-suits are not the only methods used to enhance blood flow to the brain during high-g maneuvering.  During WWII, there were a number of experiments undertaken and design features that were routinely worked into aircraft.  These  included the Me 109, which incorporated a set of toe-pedals mounted atop the rudders.  This allowed the pilot to have his legs raised to a higher level in combat, thus reducing the blood loss effects.  Other interesting designs addressed this problem being having the pilots in a prone position in the fuselage, those these designs were abandoned once the g-suits entered popular use.  Modern aircraft have various innovations to add to the effect of the g-suit — the General Dynamics F-16 Fighting Falcon is perhaps the best known example of this, as the pilots sit in a deeply reclined position in the cockpit, thus also ensuring that the legs are higher and the head lower in comparison to an upright sitting position.  Perhaps the most bizarre g-suit and pressure suit in history was developed for high altitude applications to ensure the survival of a dog.  That garment is presently in the collection of the USAF Museum.

Israeli pilots are famous for sitting upright in their F-16 fighter planes, eschewing the reclining seat design.  Why do they do that?


I wonder if Prof. Frank Cotton is related to Sir Sydney Cotton, another Australian, who created the Sidcot suit worn by fighter pilots during World War I and was responsible for the creation of the RAF’s aerial photo unit during World War II. Earlier he flew his own Lockheed Electra around Germany just before the war, taking photos of the industrial centres even with an unsuspecting Herman Goering sitting alongside! See the book, “Last Plane Out of Berlin,’ which details this and more. He was also the man upon whom the original James Bond was modeled on by Ian Flemming.


They were cousins, I believe.