On this day in aviation history, at the 11th Hour, on the 11th Day of the 11th Month, in 1918, the Armistice was signed in a rail car in a wood in France.  Thus ended the Great War, a horrific conflict between the Great Powers of Europe.  On this special date, we must all take a moment and remember the sacrifices of our soldiers, men and women who brought us the world we live in today.  Take a moment today to thank a veteran for their willingness to stand strong in the gravest times, to let them know our appreciation for their efforts in the World Wars and the Korean War, the Cold War, the Vietnam War, the Falklands War, and the First Gulf War and more recently the combined coalition who fought in Operations Enduring Freedom and Iraqi Freedom — as well as countless smaller wars and conflicts in between.  Thank you for your service. 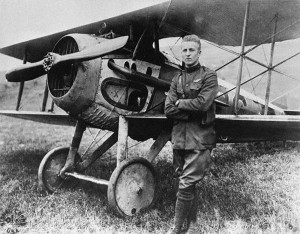 Second Lieutenant Frank Luke, Jr., the Arizona Balloon Buster and first pilot of an aeroplane to receive the Medal of Honor.

As brief history, the Great War began on July 28, 191, with the Austro-Hungarian invasion of Serbia.  Germany then invaded Belgium, Luxembourg and France, whereupon Russia attacked Germany.  England entered the war on the side of France and a stalemate of bloody trench warfare ensued.  Russian and Austro-Hungarian forces fought, and Germany pushed Russia out of Poland.  The Ottomans, Italy, Bulgaria and Romania were involved.  The Russian Czars were overthrown in the October 1917 revolution.  The USA entered the war and began sending troops and aircraft to Europe.  In 1918, the Germans launched large offensives against France.  France, Britain and the USA then pressed back in strong advances, forcing the Germans to sue for peace in 1918. 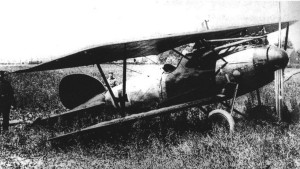 Amidst this dark conflict that pitted millions of men against one another, another history played out — that of aviation in the Great War.  In just four and a quarter years, aeroplanes went from being a handful of rickety, under powered, unstable and unreliable experimental craft to well organized air forces that numbered approximately 15,000 to 18,000 planes on each side!  These aircraft were no longer slow, low flying “kites”, but had become deadly military machines capable of speeds well in excess of 100 mph, armed with machine guns and carrying bombs.  Aerial tactics went from lone pilots performing reconnaissance and artillery spotting missions to skilled packs of hunters flying fighter planes, strategic bombers and even purpose-built ground attack aircraft.  Indeed, it took the Great War to end the pleasant era of aviation as an exclusive gentleman’s sporting pursuit.  What followed, however, was nothing glorious, despite the tales of aces and great deeds in the skies. 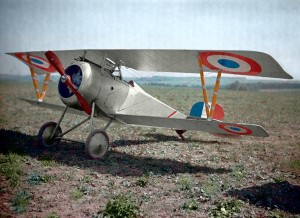 A Nieuport biplane fighter in the Haut-Rhin, Alsace, France in 1917, a rare Autochrome Lumière color photograph by Paul Castelnau taken during World War I.

Casualties in the Air War

It takes little more than a review of the casualties suffered in the air war of World War I to truly understand the deadly nature of this new type of warfare.  By the time of the signing of the Armistice, aviation casualties among the main combatants on the Western Front had reached staggering numbers — and these figures also must include both combat and non-combat losses as airman or ground crewman.  One dies just the same from a training accident preparing for war as from being shot down by the Red Baron himself. 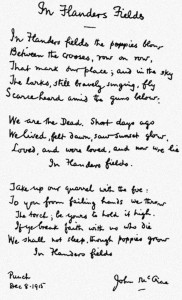 “In Flanders Fields”, Poem by Dr. John McCrae, in his own hand. Original at the McCrae Museum of the Guelph Museum, Ontario, Canada.

The Royal Flying Corps, Royal Air Force, and Royal Naval Air Service together had suffered 16,623 casualties, of whom 6,170 were killed.  Germany’s air service too suffered a similar number, 15,562 casualties, of whom 6,848 were killed.  France too suffered terribly with 2,870 killed and though the figure isn’t recorded, an estimated 7,000 were casualties overall.  The United States, which entered the war near the end, lost just 235 men in the air war, reflecting also its relatively lower numbers of squadrons deployed.  Other countries lost several hundred each.  In 1914 alone, more aviators died than had been previously licensed by the end of 1913 — air combat had turned into a training mill feeding a front line conflict where survival was uncertain at best. 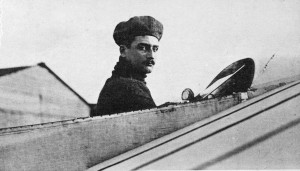 French aviator Roland Garros, once a famous civilian sportsman aviator, who became a deadly ace in the Great War.

In the wars that followed, aviation would become increasingly deadly.  Thousands more would perish and entire cities would burn.  Ultimately, nuclear weapons would be introduced and the final dark chapter air power would be written (at least we hope that this is the darkest chapter).  Even if this history is a terrible recounting of death and destruction, it is nonetheless worth recounting.  These death tolls are not the only metrics derived of these wars.  Rather, the world we know today was achieved only because men and women were willing to lay down their lives to fight for what was — and is — right and just.  Despite the challenges and conflicts that do exist, our world today has emerged as one where the principles of human rights, justice, liberty and democracy are widely recognized as universal ideals, even if they are not always practiced.  Above all, the hope of the future is that one day peace can finally be achieved.

Thus, take time to thank a veteran today.  Know too that when you look up to the skies, among the many who serve as the guarantors of our security in this new world, a special honor is reserved for those who have wings.