The two aeroplanes had just arrived in India after a long transit by ship from England.  They were hoisted ashore into the dockyards of Bombay and preparations were attempted for a first air show in India.  The Farman Biplane was owned by Baron Pierre de Caters.  The other aeroplane, a Blériot with a Gnome engine, was owned and piloted by two brothers, Jules and Jean Tyck, both of Belgium.  All seemed in order until the organizer of the flying venture, Mr. Ernest Esdaile, learned that there was little official interest in aviation among the colonial administrators of British-ruled Bombay.  Those old men made clear that they believed that aeroplanes were little more interesting than circus shows.  Politely rebuffed and at great personal cost, Mr. Esdaile and the pilots took their aeroplanes across India by rail to Calcutta where he hoped they would be welcomed with greater interest.  India was about to experience its first flight — whether it wished for it or not. 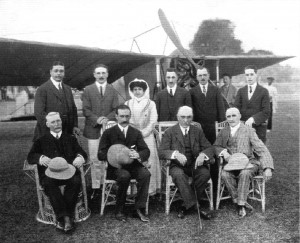 As Mr. Ernest Esdaile wrote in Flight exactly 100 years ago today in the the Royal Aero Club’s newsletter, they were welcomed more heartily in Calcutta.  Soon arrangements were made and on December 28, 1910, the first flight in India took place.  The Belgian pilot Jules Tyck managed to take off in his Blériot monoplane from the Tollygunj Club’s golf course lawn.  The event was very popular and within the grounds of the Club were no less than 10,000 Indians and 5,000 Europeans, all dressed in their finest clothes.  The ladies wore their finest hats to ward off the December sun of India.  Outside the esteemed Club’s gates were millions of others who could not hope to set foot within the upper class Club, yet dreamed of seeing an aeroplane.  Their eyes were turned up to the skies as they waited patiently to catch a glimpse of the first aeroplane flight in India.  That honor, it turned out, would fall to the stylishly dressed Jules Tyck, the Belgian in his Blériot. 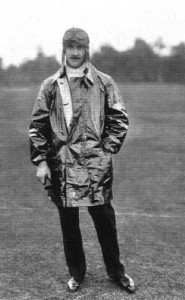 The Belgian Jules Tyck who became the first aviator to fly in India on December 28, 1910, at the famed Tollygunj Club golf course in Calcutta. Photo Credit: Flight

In recalling the events, Mr. Esdaile reported that the roads were jammed for three miles around with “cars, hacknies, tongas, carriages of every sort and description.”  The writer noted that amidst the great throng, “The sahib in his 6-cylinder car, the Maharajah in his gaudy carriage, the humble pariah in his reckla, all were jostled into an indescribable hubbub.”  This was India.

Tyck reached a height of 6,500 feet and circled overhead for nearly 45 minutes, much to the delight of the crowd.  Meanwhile, Baron de Caters took up the Farman on no less than 20 short “hops”, each time carrying a different passenger, all of whom shared the experience of those seeing India from above in an aeroplane for the first time in history. Among those who flew that day was Mrs. N.C. Sen, the sister of the late Maharaja of Cooch Behar.  Thus, she held the honor of being the first woman in India to fly in an aeroplane.

Sir Moore O’Creagh, the Commander-in-Chief of the Indian Army, mastering the details of a Farman biplane under the guidance of Baron de Caters — at Tollygunj in 1910. Photo Credit: Flight

The flights of the Farman, however, were put to an end when the engine backfired and ignited some of the petrol that had dripped on the aeroplane’s lower wing.  Luckily, there was plenty of sand available from the golf course at Tollygunj Club and the fires were extinguished before any serious damage took place.  Repairs were accomplished in the days afterward.

Following this successful showing at Calcutta, during which the police could not handle the crowds, the flyers continued on to Bangalore where they flew on February 3, 1911.  Arrangements there were improved and the military made a strong showing to ensure that the crowds did not again get out of hand.  This time, however, few attended as many were willing to pay to enter the grounds and see the flights.  As Ernest Esdaile noted, “Natives and Europeans soon got scent that once up in the air and the aeroplane could be seen just as easily sans payment.”  Nonetheless, the Maharajah of Mysore took a personal interest and made a donation to encourage aviation.  They continued on and made a flight at Hyderabad and at Madras on February 18, 1911, before the aviators returned to Europe.  It seemed that finally aviation in India had taken off. 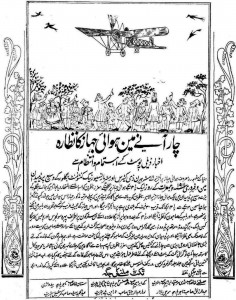 The poster announcing the upcoming flying event in Bangalore, which recalls in Urdu the popularly known legend in the Sacred Vedas that says that “the end of things mundane” will take place a thousand years after man first flies. Photo Credit: Flight

Ernest Esdaile, who had arranged the first flights in India, went on to organize “By Air to India”, a flight challenge that was the news of 1912 in the Aero Club’s newsletter, Flight that was published 100 years ago this week in aviation history.  Hence, the stories of flying in India were making the rounds of the Royal Aero Club membership as various proposals were considered on how to best achieve the venture.  The edition of Flight carried the announcement of the “By Air to India” challenge and noted that even if no other pilot was willing to undertake the voyage, Samuel Cody had stated that would fly it alone.  This was a challenge that others could not let go unanswered.

Mr. Esdaile would remain involved in both aviation and India right up to World War II, when he advised the British government and military on Indian traditions and culture as the RAF deployed in great force to the subcontinent to thereby ensure that Hitler and Japan, the two most powerful Axis nations at war with the Allies, did not join up and span the Middle East to China into their sphere of control.  By then, aviation had come a long way from the early ventures of 1910-1912.

Some say that the first flight in India actually took place several weeks earlier when Mr. Davies took off on December 10, 1910, at the Allahabad Industrial & Agricultural Exhibition from the polo grounds.  A contemporary report lends credence to this claim, as it stated that “The first actual flight was successfully attained by Mr. Davies in a ‘Bleriot’.  On the 10th of December, Mr. Davies had the machine ready and early in the morning circled the polo ground at a height of twenty five or thirty feet.”

Another report claims that the first flight took place on December 11, when Henri Pequet carried one of the sons of the Maharaja of Benares aloft, though this is also reported in the Calcutta newspaper, The Statesman” as having taken pace on December 17, 1910.  In that version, Henri Pequet flew his biplane over the confluence of the Ganges and the Yamuna (Sangam) and over Allahabad Fort.

So who was the first to fly?  According to the respected Ernest Esdaile, it was Jules Tyck, but then again, who knows?  Likewise, though records show that Mrs. N.C. Sen was the first woman to fly, it is also reported that numerous others in India also made such claim.  Apparently in late 1910 and early 1911, it was quite common for fashionable European ladies to casually let drop over tea at the Club that they had been out flying over the weekend.  How many were tall tales and how many were true stories can never be known with confidence as by 1911, exhibition flying was fairly frequent — at least in Allahabad.

Who flew the first “Aerial Post” in India and in what aeroplane?

On February 18, 1911, French pilot Henri Pequet (1888-1974) carried the first official mail flown by airplane. The flight occurred in India. Pequet carried a sack with about 6,000 cards and letters on his Humber biplane. The plane flew a distance of five miles, from an Allahabad polo field, over the Yamuna River, to Naini. All mail received a special cancel depicting an airplane, mountains, and “First Aerial Post, 1911, U. P. Exhibition Allahabad.”