“The people of Sheerness are not altogether alone in their ability to hear German airships passing overhead.  A correspondent writing to the Edinburgh Evening Dispatch has also became so uneasy that he was prompted to communicate his experience to the Press.  He says that from his window overlooking the Firth of Forth he saw a luminous object, high in the air, approaching westwards rapidly.  Attaining the coast, it hovered for a short while, and then flew off in the direction whence it came.  He further remarked that the craft, whatever it was, was shaped like a cigar.”

So wrote, “Oiseau Bleu”, exactly 100 years ago this week in his editorial report for Flight, the official publication of the Royal Aero Club.  Of course, the object was identified by the viewer and editor as a Zeppelin because that was what dominated aviation discussions at the time, the emerging threat of German’s ever-expanding fleet of Zeppelins.  The only problem was that whatever it was that the Scottish correspondent had seen, one thing that is sure — it wasn’t a Zeppelin. 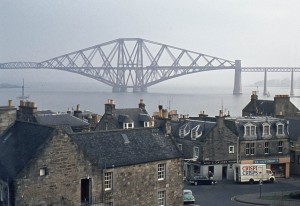 The The Forth Bridge (opened in 1890, photographed in 1972) that spans the Firth of Forth in Edinburgh — a view that is largely unchanged since 1912. Photo Credit: Monster4711/Wikipedia

The Threat of German Zeppelins

By 1912, most aeronautical minds in England had come to the inescapable conclusion that German was making extraordinary progress with its military Zeppelin programs.  The large airships, with rigid frameworks that held a series of gasbags, were covered with a doped fabric so as to take on an aerodynamic shape.  Like an elongated bullet, based on upwards of three or more large diesel engines mounted on pods that dangled on the lower sizes of the great airships, the Zeppelins were fast, flew high and had an abundance of power.  What was more, they could carry a dozen or more men and, in times of war, could drop dozens of large bombs on targets below. 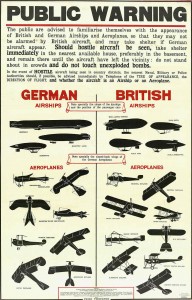 A poster from London relating the various types of aircraft one might see overhead, c.1915 in the first full year of the Great War. Source: National Archives of the UK

In November 1912, the Great War was still two and a half years in the future.  At the time, Germany was not undertaking missions that made runs at the borders and territories of the United Kingdom, nor engaging in threats of any sort.  Thus, whatever it was — “shaped like a cigar” — it was not a Zeppelin.  Rather, it bears an uncanny resemblance to something else almost word for word matching the terms used to describe in later sightings that from 1947 onward would be known as UFOs.  The writer continued:

“Some time after the disappearance of the first apparition a second one appeared and repeated the performance.  This one, however, had the shape of a crescent.  What a lot of pleasure Germans must get out of seeing us periodically scared, and what a big pity it is that the Government allows it to continue.  I do not pretend to speak as an expert, but this much I know, that my pride for my country suffers when it becomes so painfully evident that Germany can terrorise us with her Zeppelins.” 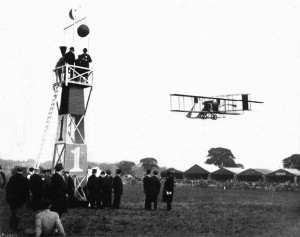 The rest of the week’s issue of Flight carried news about many other events and items, as well as the usual photos — this one, above, from races at Hendon. Source: Flight, November 23, 1912

There is no evidence whatsoever to suggest that the mysterious aircraft spotted that night in November 1912 over the Firth of Forth in Scotland was extraterrestrial.  The very idea of “Little Green Men” had yet to become part of the public consciousness, though early astronomers had mapped canals and entire cities on the planet of Mars.  Those maps and sightings, however, had largely been debunked by later astronomers — even by 1912.  While there were “cigar-shaped” airships, as well as numerous other aircraft of various shapes and sizes, none quite match the sighting over Scotland — and none matched the “crescent” shape later described.

So just what was it that “Oiseau Bleu” reported in his article in Flight’s November 23, 1912, issue?  Sadly, the writer included no photographs or drawings of the craft that was sighted.  Today, we can only wonder — we have no radar logs, no pilot reports, and no supporting evidence of any type.  Thus, we have conclude in the end, in the true sense of the word, what was seen over Scotland that night was indeed an “Unidentified Flying Object” — and therefore, I think it is safe to conclude that it must have been a weather balloon…. 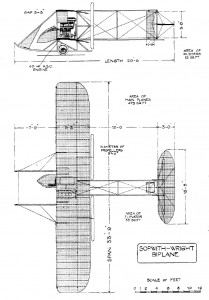 Plans for the Sopwith Wright Biplane, as published in Flight, November 23, 1912.

Germany’s Zeppelins would indeed bear out the validity of the concerns expressed by the editors and writers at Flight.  The call for an expanded British military aviation effort would go largely unheeded for many months.  It wasn’t until the first Zeppelin raids on England began that the foresight and logic of those had called out the threat early on would be validated and finally recognized.  Although Zeppelins carried out only approximately 50 raids on all Allied countries during World War I, their place in history as a strategic bombing terror weapon is widely recognized.  By 1917, as defenses against Zeppelins increased, the Germans continued their strategic bombing campaigns with Gotha heavy bombers.  Together, the Zeppelins and Gothas caused 1,413 deaths and 3,409 injuries — a minor sideshow relative to the mass scale casualties on the Western Front.  However, casualties of civilians living in cities in homelands was a new experience — and one that would change the face of warfare forever.

What was the most deadly Zeppelin raid on London?  How many casualties did it cause?