100 Years Ago in Flight :: Accidents, Dreams and the Hunt

At this time 100 years ago in England, the Royal Aero Club newsletter, Flight, was arriving in mailboxes across the country.  It carried much news of interest, ranging from an in-depth front page editorial about Britain’s rising position in aircraft manufacturing — delayed, but finally advancing as compared with ventures upon the Continent — to news from around the world, surprising with a focus on the “sportsman” and individual aviator who, on his own wits and powered by his dreams, took the art and science of aviation forward out of the era of early experiments, trials and errors.  Such efforts, however, were not without their risks.

“Congratulations to Mr. R. T. Gates, Manager of the London Aerodrome and Director of the Grahame-White Aviation Co., Ltd., on his rapid recovery from the unpleasant spill he suffered some three weeks since while taking part in the night flying demonstrations at Hendon.  He was so badly shaken that it was deemed advisable to keep him a-bed in his office on the ground till the second day after the smash, when he was driven home in his car.  But, somehow or other, he managed to get down to the ground three days later.

The general impress on the ground was ‘the he would forego taking a practical part in the exhibitions in the future,’ but the fact remains that he was out and around the aerodrome on No. 5 biplane on Thursday of last week.  Mr. Gates has a peculiar knack of calling everyone a sportsman.  What is he but one himself?” 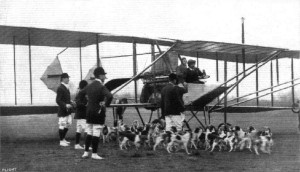 A curious headline from the November 30, 1912, issue of Flight: “Last week Mr. S. F. Cody made a sporting flight in connection with the Aldershot Beagles at Eelmoor Bridge, Laffan’s Plain, when he accompanied the meet for a short period after the start. In our picture Mr. Cody is being greeted by the Master, Capt. Sankey, before the start.”

Meanwhile, word came also of a Frenchman who sought to make a grand tour of sorts, circling France and traveling to North Africa before vaulting up to England.  Surely, this was the stuff more of dreams than of well-considered adventure?  Or was it?

“Vedrines has up his sleeve a ‘stunt’ none the less arresting than many he has devised hitherto.  His project is to start out early next month for a three months’ tour on his Deperdussin monoplane, with the object of covering an average of 125 miles a day throughout the whole of that period.

He has planned to start from Nancy and fly to the ‘top right hand corner of France’ — Calais.  From there he intends to follow the coastline the whole way down to Biarritz and then cross, keeping parallel with the Pyrenees, to the Mediterranean coast, calling on his friends at Pau en route.  He then proceeds along the French and Italian Riviera to Genoa and down Italy across into Albania and into Athens.  From Athens he reckons to commence on the home journey, returning to Paris via Tunis, Constantine, and Algiers.  Even there he does not intend to end his journey, for he has resolved to include London in the tour and fly back again to Paris.

If he ever reaches our metropolis, an he will have accomplished no mean performance if he does, let us see to it that he is accorded a respectable welcome.” 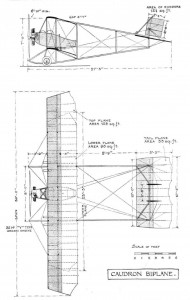 Plans for the Caudron Biplane.

Then there was a very interesting report from New Jersey about an aeroplane marriage — no, we do not make this stuff up, despite the extraordinary nature of the tale, all the more so given the types of small biplanes that they would have flown in 1912!

Apropos of the recent aeroplane elopement in Indiana, the Newark (N.J.) News makes the following remarks on what it terms ‘the new social institution.’

The aeroplane wedding solves the problem of the get-away.

It is not possible for them to throw high enough to blacken the bridegroom’s eyes with old shoes.  The newly-wedded pair area, in fact, in a position to bombard the wedding guests if they so desires.

A five-pound boot dropped on a wedding guest from a height of 250 feet ought to bring him a tremendous amount of good luck, according to the traditions of weddings festivity.

But airship honeymoons are as sure to come to an end as the other kind.  In a careless moment the bridegroom will say: — ‘You do very nicely at the levers, my dear, but your figure eights are nothing like mother used to make.’

Aeroplane marriages are highly dangerous perhaps, but all kinds are, for that matter. 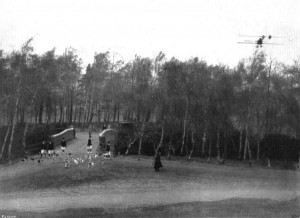 The Deutsch Aero Yacht Flies.
With Rugere at the wheel, the hydro-aeroplane built by M. Gabriel Voisin for M. Deutsch de la Meurthe was tested at Issy on Saturday last.  With six passengers and a pilot on board it rose from the ground in 70 yds., but in landing the chassis was somewhat buckled.  It is said that the machine, which is fitted with a 200-h.p. Clerget motor driving a four-bladed propeller, attained a speed of 110 k.p.h.  The span is 22.5 metres and the length 12 metres. 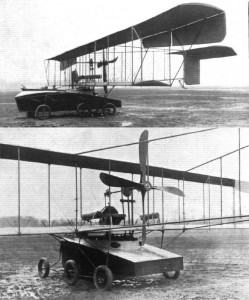 Two views of the Voisin Hydro-Aerobus — perhaps the world’s first amphibious aircraft? The caption in this issue of Flight intones, “Incidentally it may be noticed that the landing gear does not seem any too happy.”

As well, there was the usual flurry of international news to report, some of it quite interesting:

French Military-Built Dirigible.
Following the example of the British Army, the French military authorities at Chalais-Meudon have constructed a dirigible which had her first trial on the 22nd inst.  She is of the non-rigid type, the envelope being 77 metres long and 12’04 metres diameter at the centre, with a capacity of 6,500 cubic metres.  Two propellers are fitted, the power being provided by two Clement-Bayard motors.  The airship has been named ‘Fleurus’ in memory of the battle of June 27th, 1794, at which a balloon was employed by the French Army for the first time.

Garros Goes to Tunis.
On Wednesday, Garros, with his Blériot monoplane, left France for Tunis where he intends to make an attempt to regain the height record.

Madame de Laroche Flying Again.
Good progress is being made by Madame de Laroche in the piloting of her Sommer biplane at Mourmelon, and during the past few days she has made several flights of a quarter of an hour’s duration.  She appears to have entirely recovered from the effects of her accident at Rheims in July, 1910, and flies her machine with complete assurance.

A Donnet-Leveque Over Paris.
By way of testing a Donnet-Leveque hydro-aeroplane ordered by Mr. Jones, of the Whitehead Torpedo Works, of Fiume, Austria, Andre Beaumont, on the 22nd inst., rose from the Seine in front of the Donnet-Leveque works at Bezons, and following the course of the river, flew to Paris.  Turning over the Grand Palais, he then made his way back to Bezons.  He was accompanied by the Austrian pilot, Koening, who is learning to fly the machine. 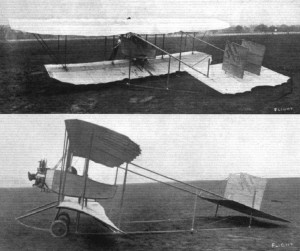 Finally, there was this listing under the news about issuance of flight records — do you recognize any familiar name amongst these four?

The issue of Flight from 100 years ago this week, also included an interesting story about efforts to invent an aerial navigation instrument with a moving map — progress was reportedly underway separately in both England and in Germany.

“Some few months back I mentioned in these paragraphs that Messrs. Wheatley and Sidney V. Sippe were conducting experiments on a device intended to be fitted to a motor car, by which, no matter in what direction the car was driven, its location at any moment would be indicated on a roller map contained in the apparatus.  They further intended applying the same invention to steamships and to aeroplanes, examples of locomotion in which the velocity of the vehicle relative to earth cannot be determined in such a ready way as it can be from the road wheels of a car.  How far they have proceeded with the device since that time I have not heard.  I mention this because I heard from a friend of mine, in Germany, that a Bremen engineer, of the name of Weller, has produced a similar device for aeroplanes, whereby the pilot of the machine so equipped will be able to undertake reconnaissance flights at night time, and be sure of returning safely to his depot.  A large sum is said to have been offered by the German Minister of War for this important invention.”

Please do get back to us with a progress report on that item — it seems a needed bit of inventive trickery that just might come in handy some day.  In the meantime, however, I think I’ll stick with my GPS.

Did Vedrines ever finish his three month tour of Europe and North Africa?