Dr. Brunholf Baade and the Baade 152

At the end of World War II, Dr. Brunholf Baade had emerged as one of Germany’s most advanced aeronautical engineers and theorists.  His greatest project was the Junkers Ju 287, an advanced jet aircraft that used the same proven Jumo jet engine that powered the Messerschmidt Me 262.  The Ju 287 design was very advanced — in fact, it broke the mold of established engineering practices in almost every respect. As a heavy jet bomber, it featured a tear drop fuselage with radically different, forward swept wings that mounted a cluster of three jets on each side, giving it six engines and a top speed of 535 mph.

The OKB-1 EF 140, a near copy of the Junkers Ju 287 designed by Dr. Baade and his team of German engineers.

With the Soviet advance into Germany in 1945, however, the Ju 287 fell in Russian hands.  Worse yet, the Russians were not satisfied with just seizing the aircraft and engines.  As prisoners, Dr. Brunholf Baade and approximately 200 of some of Nazi Germany’s best engineers were seconded to Moscow.  There, they were held against their will and forced to develop Soviet jet engine and aircraft technologies.  Finally, after nine hard years, Dr. Baade and his team of engineers were released and allowed to return to East Germany, a Soviet satellite state.  Arriving at Dresden, at the stroke of a pen, the East German government set up an entire aviation industry.  Taking the WWII-era Jumo and BMW jet engines a step further, and combining those with what engineering developments they had pioneered while in Russia, the team began to finally develop a uniquely East German aircraft.  This was to be the Baade 152, a four engine commercial jet airliner.

Yet the Russians had one more surprise in store for Dr. Baade and his German engineers — and it would prove fatal for the entire industry. 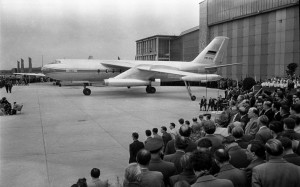 Not long after their return to East Germany, Dr. Baade and his engineering team went to work adopting their progress while in Russia to a civilian airliner.  This would be called the Baade 152.  Using the Jumo and BMW engines with refinements made over previous nine years, the team was able to develop a high speed, well-engineered prototype civilian airliner in an extraordinarily short time, starting in May of 1956 and finishing less than two and a half years later.  The first flight of the Baade 152 took place today in aviation history, December 4, 1958.

Lasting 35 minutes, the flight proved the basic characteristics of the aircraft.  it also uncovered some deficiencies, as is common in any test program.  The chief problem were the engines.  Pylon mounted under the wings, the engines were nestled with both in a single pod.  When one failed, it was clear that the resulting compressor explosion or issue would likely affect the other.  Another issue was the center line, tandem landing gear configuration with wing tip mounted stabilization wheels.  While this reduced weight overall, it also created some problems — the next prototype series in the aircraft would feature wing-mounted main landing gear that extended from the bottoms of the engine pods. 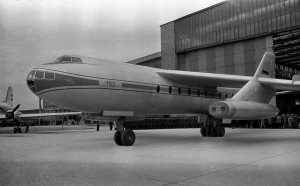 While these issues were addressed in the design, the initial prototype received additional modifications.  Four months later,on March 4, 1959, the Baade 152 prototype was ready for its second flight — a catastrophe.  The aircraft crashed and all aboard were killed.  While the engineers wished for a full investigation, the East German government instead avoided the issue and the investigation was shelved — no full, in-depth review and analysis was undertaken.  Instead, the East German government ordered the team to continue with the development and fly the second prototype aircraft.

The End of the Program

During the next series of test flights, the aircraft performed well on its first two test flights.  Expressing satisfaction with the ongoing development, the East German government ordered twenty of the aircraft for the East German national airline, called Deutsche Lufthansa (this would later become Interflug).  On the third test flight, however, the second prototype aircraft suffered a fuel system failure during a test steep descent.  The engines were restarted, however, and the aircraft landed without incident.  The engineering team suspected that the same failure may have caused the first prototype to crash.

At this point, however, with the aircraft already in production, the Soviet Union reentered the picture — they ordered the East German government to put an immediate end to the program in favor of acquiring Soviet-designed aircraft.  The East German government, of course, as a satellite state within the Soviet-dominated East Bloc, agreed and terminated the program.  The twenty aircraft on the assembly line were all scrapped and the engineers were told that the entire East German aviation arm would be shutting down.

For Dr. Baade and his team, it was the final insult and a hard lesson in the realities of life under Soviet rule.  East Germany would never fly its own jet airliner and the engineers and workers of an entire industry were put into other jobs, by order of the State.

One Final Bit of Aviation History

The aircraft that the Soviets forced East German to acquire was the Tupolev Tu-124, a short range, regional aircraft and the world’s first turbofan airliner.  Seating a maximum of 56 passengers plus a crew, it typically was fitted with 44 passenger seats, which made it ideal for short hops around the East Bloc countries of Europe.  As it was, Interflug had to wait until July 1968 to take delivery of jets from the Soviet Union.  Eschewing the Tu-124, instead, the East German’s waited for the improved Tu-134, of which they acquired 39 aircraft.  The Tu-134s served East Germany until March 1994, when Russia bought them back and turned them over to Aeroflot.  With the reunification of Germany, Interflug was shut down and its newly acquired Airbus A310 were transferred to VIP service while the rest of the older Russian equipment (primarily Il-62s) still in use was transferred to the German military.  That was fitting since during the East Bloc days, Interflug, despite its civilian purpose, was actually an entity of East Germany’s air force.

The radical development in Moscow of the Ju 287 jet bomber, with its swept forward wings.

Were there any other major aviation-related innovations achieved by the East German engineers during their nine years forced labor in Russia?  What were they?


Can anyone tell me why the Czech’s were allowed to continue aircraft design and production while the Germans were not?


Might have something to do with the fact that Germany was responsible for starting WW2 ?