A Visit to the Jezzi Camp at Eastchurch

“We found Mr. Jezzi quite alone in overalls, with a scarf round his neck and carpet slippers on his feet, busy in his shed.  He was hard at it, fitting wind deflectors between the two V-set rows of cylinders of his J.A.P. engine so that it would keep cooler when running.  And perhaps the old motor deserves it, for it has seen Mr. Jezzi through a hard two years of experimenting.”  So began the issue of Flight 100 years ago this month in its review of the new Jezzi Biplane, powered by a venerable and reliable J.A.P. 35 hp engine.

Mr. Leo Jezzi, a British aviation enthusiast, may well qualify as the world’s first home builder, in a modern sense — or at least because he built his planes in his home! 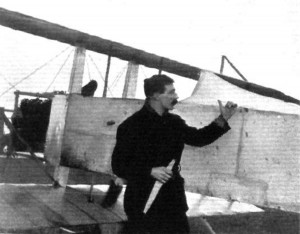 The writers described the new aeroplane that Mr. Leo Jezzi was perfecting.  In fact, the experience, as described, is nearly identical to that of the modern home builder of EXPERIMENTAL category aircraft.  This is, even in 1912, the part-time builder’s experience, a natural result of Mr. Jezzi’s business schedule:

“The present machine is a most attractive-looking miniature biplane.  It was built in its entirety by Mr. Jezzi himself in a workshop adjoining his private house, south of London.  That he should have been able to complete it at all is rather a wonder, for a city man has not, as a rule, much time to devote to a hobby.  But notwithstanding strenuous days in the city, Mr. Jezzi has put in equally strenuous evenings, and more often nights, in his workshop following out his fascination for aviation.  Week-ends and business holidays are the only periods when he can get away to his shed at Eastchurch.” 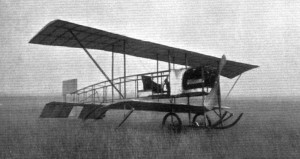 The description of Mr. Jezzi’s workspace alongside his home, nonetheless, has been constructed to favor the work on his small biplane, as the writers relate a test of the engine and propeller:

“At last the wind deflectors are fitted, and he proceeds to test the engine.  Shutters at the end of the shed behind the machine are taken down — otherwise they might be blown down by the propeller slip-stream as soon as the engine is started.  A Navy man pulls over the propeller and the motor roars into its note.  The place gets full of blue smoke, and with the draught we all get well nigh frozen. 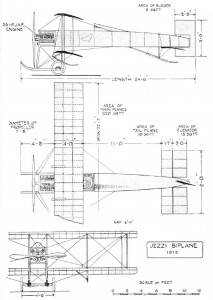 The English, of course, must always have their tea and so, at the typical hour, all work must end for the tradition of the hour — home builders of today could learn from this, to improve the experience of building and to bring friends into the effort:

“It was with some amount of satisfaction, therefore, that we heard the cry of ‘Tea’s ready!’ coming from the little living room.  There were two sheets of newspaper on the table for a tablecloth, and on it were arranged enamel cups, and knives and teaspoons enough or a party of five, for Mr. Arthur Cooper had by then arrived bringing with him his contribution towards the ‘stores’ — two big loaves of bread and a pound of butter.  In addition, Mr. Jezzi had produced from his larder — propeller box nailed to the wall — liberal supplies of lovely preserved ginger and jam.”

“Let us draw the curtain over the picture of a party, exhibiting enormous appetites, rapidly becoming cheery under the comforting influence of honest bread, butter and jam and steaming tea, for it is all in a day’s march when you are learning the gentle art of aviation.”

The writers took some pains to describe the machine’s performance, highlighting that it was a well-designed biplane with surprising capabilities.  Many a modern home builder would have been proud of such an accomplishment:

“The present Jezzi biplane is a machine that has been design to fly at a high speed with comparatively little power.  The biplane’s normal speed with the motor pulling moderately well is about 65 m.p.h., which is no mean achievement with an engine power of 35-h.p., especially as the machine’s capabilities do not alone lie along the line of speed.  It is a common occurrence for Mr. Jezzi to take a passenger of 12 stone for a trip round the ground, while on one occasion he actually flew with a 16 stone passenger, although on this occasion the heavy load did make the machine drag its tail somewhat.” 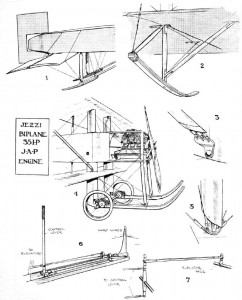 Diagram of key features of the Jezzi Biplane. 1. The tail; it is so constructed that the levers operating the rudder and the elevators may be arranged inside, so saving wind resistance. 2. The laminate wing skid. 3. The attachment to the fuselage of the wires that take the main lift; they are of ten-gauge material, and it will be noticed that they are carefully enclosed in a stream-line casing of aluminum. 4. General sketch of the front of the machine. 5. One of the strut attachments. 6. Sketch showing the arrangement of the elevator and warping control. 7. Detail of the control, showing how adjustment of the elevator is effected. Source: Flight, December 14, 1912

Streamlining is a critical thing when your aircraft is under powered and in this regard, Leo Jezzi worked out a range of solutions that would decrease profile drag.  Indeed, considering the development effort, it is apparent that Jezzi was quite innovative and would have done well in modern times:

“To obtain this efficiency Mr. Jezzi has endeavoured to cut away as much head resistance as is possible.  There we find that there is only one rank of struts — carefully stream-lined ones at that — between the planes, and that there are few cross bracing cables.  The body of the machine, too, is covered in throughout its whole length with fabric, and is sufficiently wide against the tail to allow of the levers operating the rudder and elevators to be disposed inside.”

“The planes were, until quite recently, of 28 ft. and 14 ft., span respectively for the upper and lower spreads.  Just lately, however, extensions have been fitted to the lower plane to bring it to the same span as the upper surface.  Their maximum camber is relatively small just 1 1/2 ins., their maximum thickness 2 ins., and their incidence to the relative wind in flight from 4 degrees to 5 degrees.” 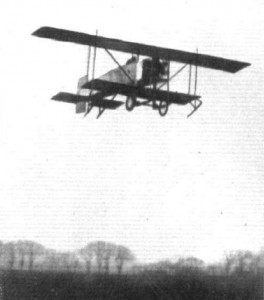 Materials were also the key to the the Jezzi Biplane.  Specific wood types were selected for their weight, strength and flexibility for various uses within the overall airframe — as described in Flight:

“In the construction of the machine ordinary but particularly clean spruce has been made use of almost exclusively.  Indeed, the only other wood that is used, and the only section of the machine in which it appears, is English ash for the landing skids.  For the landing gear our sketches show its chief characteristics, and little need be said, except that it is very solidly built and has given no trouble whatsoever, although it has had to take landings in some of the roughest parts of the Eastchurch ground.  The control of the biplane is, perhaps, the simplest system that is in use at the present day.  It had a vertical lever, universally jointed, which controls the elevators and the wing warping, and a pivoted foot bar that operates the rudder.”

Ultimately, the Jezzi Biplane was a reasonable platform, under powered, but easily flyable.  Leo Jezzi flew it for a time.  Being a home builder without interest in replicating or manufacturing the machine, its future was doomed from the outset.  Other, more powerful aeroplanes were soon under development which had engines of 50, 75 and even 100 hp.  The little 35 hp J.A.P. engine, clearly, was ill-suited to the ever advancing field of powered flight.

Early aviation included numerous starts, false starts, failures and achievements in rather unequal number.  The majority of experiments did not make it past one or two designs before being either incorporated into other designs or abandoned altogether.  Throughout 1912 and into 1913, as the British government took more and more interest in flight, they began to selectively fund aircraft that had potential, ever seeking more powerful, larger and faster planes.  Planes like the Jezzi Biplane were ignored.  And soon enough, the British Government would fund their favored option — the Be 2c, a biplane that would take the country into the early months of World War I.

Whatever became of the Jezzi Biplane?  Did it crash?  Did Mr. Leo Jezzi continue in aviation or leave it to others in later years?


Hi
Leo Jezzi was my great grandfather. My grandfather was Francis Jezzi but this name was changed during the war to a more British sounding name. Unfortunately Francis is no longer with us to ask and I know very little about Leo apart from his expertise in aviation and that I think he was from Siclly. I would be very interested to receive any information that you or others have about him and his works.

I notice you are related to my great uncle Francis. Unfortunately I never met him, although I met Mary several times as she lived with Cecelia, my Grandmother, for a while. I wonder if you have any info on other members of the family as I seem to have developed an interest recently.

Hoping to hear from you. Best wishes

My great grandfather was also Leo Jezzi! My grandmother was Cecelia, Francis’ sister.

I would also be most interested to hear from you Sebastian, if you should pick this up. I understand one of the planes may have been called Heracles