G1 Down in Antarctica

The Martin PBM-5 Mariner code-named G1 (or George One, in radio parlance at the time) made a long take off run, assisted by four JATO bottles to rise from the freezing waters off the coast of Antarctica.  Lifting off into a heavy snowstorm for the second mission of the day, the crew of nine men expected that weather would clear once they were inland.  Their mission was to photograph the Thurston Ice Shelf as part of Operation Highjump, a classified 1946 project that aimed to photo map the Antarctic coastline as the first step of a staged process to establish additional US bases there.  As the crew turned the PBM Mariner toward Antarctica, they had no way of knowing that their mission would become 13 days of a freezing survival test that would take the lives of three of their number. 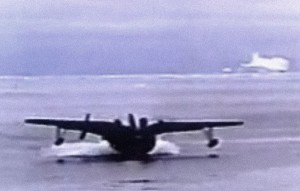 The Explosion and Crash

As the Martin PBM-5 Mariner crossed the coastline of the Thurston Ice Shelf, the crew were surprised to find that the weather had not cleared.  The snow and white out conditions continued.  The radar system clearly delineated the mountains and coastline and the flight crew could avoid the major obstacles, but what was the point?  They were at low altitude to facilitate the photo mapping mission, but with the weather as it was, the mission was impossible to complete.

The pilot, Ralph “Frenchie” LeBlanc, began a wide 180 degree turn to head back toward the ship for landing.  Suddenly, the bottom of the plane struck something — only later would they realize that they had hit a hidden snow-covered ridge line that was invisible on the radar.  The loud thump reverberated through the plane, surprising the crew.  The pilot and copilot rammed the throttles forward and pitched the PBM Mariner up skyward.  Seconds later — as best we can understand from the crew’s testimony weeks later — the forward fuselage fuel tank most likely exploded when fumes ignited after damage from that first glancing impact with the top of the ridge line.  The Mariner shattered into three main parts and crashed into the hillside at speed.  It slid to a stop showering debris and pieces across the snow’s surface.  The wings were separated from the fuselage, which was broken in two pieces.

The wreckage of the PBM-5 Mariner, G1, with survivors visible at left, when spotted twelve days after the crash. Photo Credit: US Navy

Survival on the Ice Shelf

Somehow, perhaps it was a miracle, just two of the crew members died in the crash — Aviation Radiomen Wendell K. Hendersin and the navigator, Ensign Maxwell A. Lopez.  A third, flight engineer Fredrick W. Williams, had a broken back and was bleeding from the mouth.  The pilot, Frenchie LeBlanc, was injured and trapped upside-down in the burning nose section.  Others suffered too, one with a broken arm and dislocated shoulder, another with a deep cut on his head.  Yet these men had somehow survived.  They crawled from the plane or found themselves in the snow nearby, having been thrown clear in the crash.  Most had no recollection of the explosion or impact; each struggled up and surveyed the burning wreckage through the howling snowstorm; and each thought for those first moments that they were the only survivor.

Amidst the early chaos and in blinding snow, they were able to rescue the one crewman trapped in the plane.  Additionally, they placed the desperately injured Frederick Williams on a slat to stabilize his condition and covered him with blankets to keep him warm.  He was bleeding from the mouth, a telltale sign of additional internal injuries.  Despite the crew’s best efforts, he would succumb some hours later. 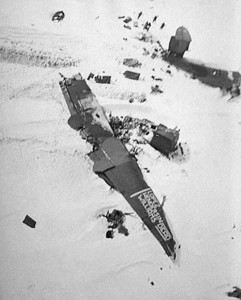 A photograph of the downed plane, with crew waving at the SAR aircraft (at top). Photo Credit: US Navy

The surviving six men gathered together.  Within the wreckage of the plane, they found extensive supplies of food and gear, almost all of which were salvageable and in good condition.  They had a life raft (useless since they had crashed on the ice and snow covered land) and a sled which they could load with supplies and drag across the land if they needed to hike out.  Their USAAF survival training, however, dictated that their best chance of survival depended first on being found by others who would soon begin flying search patterns — and that meant staying with the wreckage, which could be more easily seen from the air than a few men walking on the ice.  It also meant waiting for the snowstorm to end.

The surviving crew members were pilot Frenchie LeBlanc, copilot William Kearns, flight engineer Bill Warr, radar technician Robbie Robbins, photographer Owen McCarty, as well as a passenger, Henry Caldwell, the commander of the USS Pine Island from which the PBM Mariner launched.  The latter had wanted to fly on a mission to see the mainland of Antarctica from the air — a crash was not something he had bargained on. 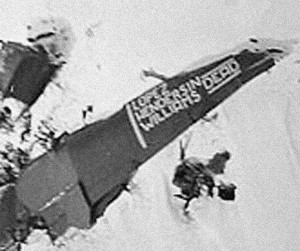 The message, painted by Robbie Robinson in bright yellow, on the right wing of the PBM-5 Mariner. Photo Credit: US Navy

Three days after the crash, the weather cleared.  The skies were lit in the brilliant 24 hour sunlight of the short Antarctic summer months.  As the crew shared blankets to keep warm, they steadily improved their situation.  The radar technician, Robbie Robbins, managed to paint a message to the top of the wing in bright yellow — it read, “WILLIAMS, HENDERSIN, LOPEZ / DEAD”.  The crew also bundled up the three dead men and buried them in the snow under the engine nacelle on the wing, an easy-to-find location for subsequent recovery.

When the PBM Mariner G1 did not report in or return from its mission, the others involved in Operation Highjump started a search and rescue effort.  They combed the seas and ice from the air using the other PBM Mariner and other aircraft in attempts to locate the downed plane.  It was a difficult search — after three days of snow, nobody knew if the wreckage would be buried, if there were survivors or if they would ever find a trace of the plane.  Once airborne in the clear sunlight, the searchers found that the dark rocks of the snow-covered land that shown through the white blanket made searching for the wreck on land extremely difficult.  Once, they flew within a few miles of the downed plane but did not see it. 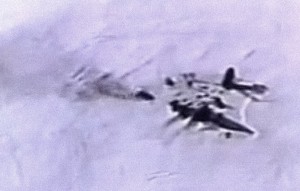 The wreckage as first seen by the SAR aircraft — at left, the smoke from the burning debris and life raft lit to signal the plane smudges a black streak across the image. Photo Credit: US Navy

The following day, the twelfth after the crash, the other PBM Mariner returned to the same area and spotted the downed plane and surviving crew.  This time, the stranded crew members loaded flammable materials onto the life raft and set it afire.  The Mariner made a low pass and dropped a weighted message — it told the crew members to form a circle if they could walk out to some water ten miles away to facilitate a pick up; if not, they should form a straight line.  The men discussed it and decided that they would have to walk the distance — they would need to drag Frenchie LeBlanc in the sled, since his injuries prevented him from walking out on his own. 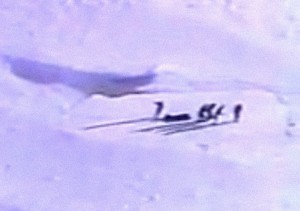 The men walking across the ice and snow covered surface toward the water, dragging the sled behind, as photographed from a US Navy rescue plane.

It took a day, but they made it to the water.  The PBM Mariner returned and made the pick up and the men were piped aboard the USS Pine Island with a heroes’ welcome.  Left behind, however, were the bodies of the three crewmen who perished in the crash and aftermath.  As well, the photographer had left behind a camera in his tent on the ice — it contained a full roll of film documenting their survival on the ice.  Today, the film would be likely recoverable and still could be developed — except for one thing — the tent, buried men, debris, and supplies that were left behind are buried under perhaps more than 150 feet of ice and snow. 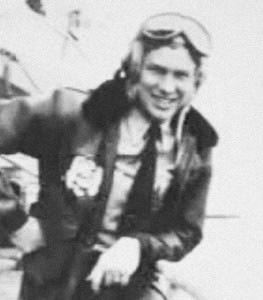 Ensign Lopez, one of the three men whose remains were buried under the wing of the wreckage — his remains are buried deep in snow and ice, awaiting recovery, a promise made by the US Navy to the families, one that is still unfulfilled.

The recovery of the bodies of navigator Ensign Maxwell A. Lopez, Aviation Radiomen Wendell K. Hendersin and flight engineer Fredrick W. Williams have never been recovered.  For decades the US Navy promised the families that they would return to the site and recover them.  The US Military has a policy that no man shall be left behind.  However, it is also worth noting that the US Navy has a second tradition that men who are laid to rest and given a proper burial ceremony (including burial at sea) are to remain where they are, “resting peacefully”.

Given the costs involved of mounting a rescue effort, as balanced against the relatively lower costs involved in locating and recovering the estimated known thousands of sets of human remains that remain Missing in Action or Killed in Action, the Navy made a decision that the best use of funds was to recover multiple others instead of these three men, even if they can be (and have been) located.  The families, however, remain hopeful that the US Navy will one day recover the bodies of these men.  As for “resting peacefully”, the ice shelf on which they are located is slowly moving and calving into the sea.  It is estimated that no more than three decades from now — at most — their remains and the wreckage of their plane will fall into the sea.

What is the worst Antarctic air crash in history (measured by most number of casualties) and what was the plane doing there when it crashed?


I guess that would be the Air New Zealand scenic flight that hit Mt. Erebus…..


A great story of action and adventures that happens to be true. The PBM was the last of the great Navy Flying Boats to see service until 1956 and with the Dutch until 1959. The PBM was designed only three years after Martin’s famous M-130 China Clipper yet flew faster and further on two less engines. It was quite the technical marvel of day.