The Ace of Grizzly Bear Squadron

With the Battle of the Bulge in full swing, the Luftwaffe rose in large numbers to challenge Allied air power over front.  Every element of Allied air power was thrown into the battle and the 2nd Tactical Air Force, which was (with the USAAF’s 9th Air Force) a dedicated ground attack force, rose to the challenge as well.  On December 29, 1944 — today in aviation history — the day dawned clear and cold and Canada’s RCAF 411 Grizzly Bear Squadron was tasked with a series of ground attack missions.  Instead, they would encounter nearly two dozen Luftwaffe fighter planes, including both the deadly Focke-Wulf Fw 190 and the Messerschmitt Me 109.

Among the Canadian pilots engaged that day, one man, F/L Richard J. “Dick” Audet of Lethbridge, Alberta, Canada, would make history by downing five enemy aircraft in just two minutes.  In the next two months, he would would down another five planes, becoming a double ace, as well as share a kill with another pilot.  This is his story. 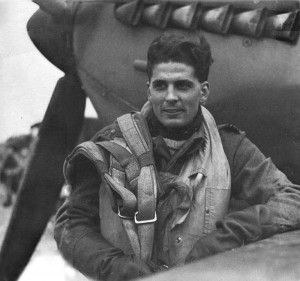 Earlier on December 29, 1943, the 2nd TAF pilots, including RCAF 411 Grizzly Bear Squadron, which was wintering at Heesch (Airfield B.88) in the Netherlands, had strafed and destroyed four locomotives and 39 rail cars, as well as damaged another five locomotives.  Simultaneously, other sections from Grizzly Bear Squadron engaged and shot down a Focke-Wulf Fw 190 and damaged another.

For the second mission of the day (of a total of three flown), F/L Audet took off at approximately 12:50 pm and was flying Spitfire Mk IXe (likely DB-G, per the brilliant research of Joop T. Thuring).  F/L Audet was tasked to lead Yellow Flight in a fighter sweep.  As they flew near Osnabruck, Germany (about 40 miles east of the Dutch border), F/L Audet lead his section in an attack against twelve German fighter planes — four Me 109s and eight Fw 190s.  The German pilots were about to encounter a flight of some of Canada’s best pilots — they would not fare well, as F/L Audet later reported in the debrief:

“I attacked an Me 109 which was the last a/c in the formation of about 12 all flying line astern.  At approximately 200 yards and 30 degrees to starboard at 10,000 feet I opened fire and saw strikes all over the fuselage and wing roots.  The 109 burst into flames on the starboard side of the fuselage only, and trailed intense black smoke.  I then broke off my attack.

“After the first attack I went around in a defensive circle at about 8,500 feet until I spotted an Fw 190 which I immediately attacked from 250 yards down to 100 yards and from 30 degrees to line astern.  I saw strikes over the cockpit and to the rear of the fuselage.  It burst into flames from the engine back and as I passed very close over the top of it I saw the pilot slumped over in the cockpit, which was also in flames.

“My third attack followed immediately on the second.  I followed what I believed was an Me 109 in a slight dive.  He then climbed sharply and his canopy flew off about 3 to 4,000 feet.  I then gave a very short burst from about 300 yards and line astern and his aircraft whipped downwards in a dive.  The pilot attempted or did bale out.  I saw a black object on the edge of the cockpit but his ‘chute ripped to shreds.  I then took cine [gun camera film] shots of his a/c going to the ground and the bits of parachute floating around.  I saw this aircraft hit and smash into many flaming pieces on the ground.  I do not remember any strikes on his aircraft.  The Browning button only may have been pressed [indicating he may have only used the Spitfire’s .50 cal Browning machine guns and not the 20 mm cannon when attacking].” 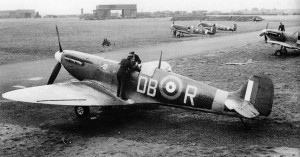 By this point, F/L Audet had knocked down three aircraft — two Me 109s and a Fw 190.  The odds had shifted now to a decidedly superior position for Grizzly Bear Squadron.  During this time, F/O R. C. McCracken downed an Me 109 as well.  Yet many Luftwaffe pilots were experts and despite the mounting losses, they fought hard.  Almost immediately, F/L Audet spotted another Spitfire in trouble even as it pursued another of the remaining German planes.  He immediately pointed his Spitfire toward the enemy, intending to both save his squadron mate and down the German plane.

““I spotted an Fw 190 being pursued at about 5,000 feet by a Spitfire which was in turn pursued by an Fw 190. I called this Yellow section pilot to break and attacked the 190 up his rear. The fight went downwards in a steep dive. When I was about 250 yards and line astern of this 190 I opened fire. There were many strikes on the length of the fuselage and it immediately burst into flames. I saw this Fw 190 go straight intc the ground and burn.

“Several minutes later while attempting to form my section up again spotted an Fw 190 from 4,000 feet.  He was about 2,000 feet.  I dived down on him and he turned in to me from the right.  Then he flipped around in a left hand turn and attempted a head-on attack.  I slowed down to wait for the 190 to fly in range.  At about 200 yards and 20 degrees I gave a very short burst, but couldn’t see any strikes.  This a/c flicked violently, and continued to do so until he crashed into the ground.  The remainder of my section saw this encounter, and Yellow 4 [F/O R. C. McCracken] saw it crash in flames.” 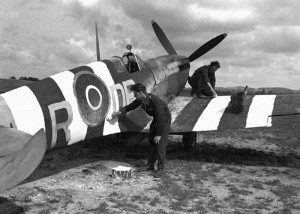 A Spitfire of RCAF 411 “Grizzly Bear Squadron” being painted with D-Day invasion stripes just prior to the invasion of France.

F/L Audet’s final score in the two minute combat was five airplanes — three Fw 190s and two Me 109s.  His fellow pilots in Grizzly Bear Squadron scored another four aircraft overall, though in separate combats elsewhere in the area.  The Luftwaffe had come up in force to contest Allied air superiority during the critical period of the Battle of the Bulge.

Instead, the Germans had seen the American, British, Polish and other pilots of the Allied air forces respond in force and achieve unprecedented kill rates.  Even so, among the many successes chalked up during this period, F/L Audet’s two minute battle would go down in history as one of the greatest triumphs in air combat history. 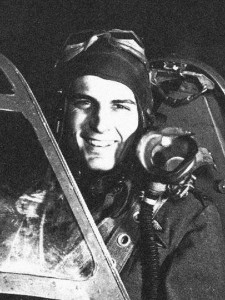 F/L Audet’s career would be short and deadly.  In his entire time flying combat with Grizzly Bear Squadron, he flew just 83 sorties for a total of 108.45 hours of flight time.  He shot down an additional 5 and 1/2 enemy aircraft in that short time — including two Me 262 jets which he engaged as they attempted to land, low on fuel (the Allied strategy for combating the German jets was to patrol near their airfields and intercept them when they returned, desperately low on fuel after their missions).

Sadly, F/L Audet’s combat career was cut short on March 3, 1945, less than three months from his first combat success.  He was not shot down by a Luftwaffe expert, but rather killed while strafing a locomotive and armed train on a railroad siding.  Hit by flak, his aircraft, a Spitfire (MK950), burst into flames at just 500 feet of altitude at very high speed.  Too low to bail out, F/L Audet’s plane flew past the train, which exploded as he passed overhead and then impacted the ground in flames — “diving straight in”, as the other pilots later remarked.  He died instantly on impact. 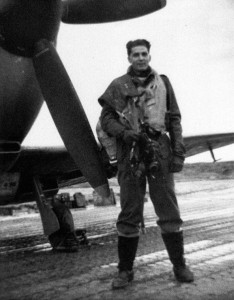 Although RCAF 411 “Grizzly Bear Squadron” was one of the highest scoring and most expert units that flew in World War II, F/L Audet proved to be the undisputed best of the best.  However, his legacy was not just as an ace and expert at aerial gunnery, rather he proved to be a natural leader and was well-liked for his humble, good nature.  As one of the other members of RCAF 411 wrote of his loss initially when he was still considered missing in action (the note being entered into the squadron’s Operations Record Book), F/L Audet was, “Modest and unassuming, he was just one of the boys and a real credit to Canada and her RCAF.  His daring and keenness led to his presumed death.  He was a leader, respected and admired by all. Just one swell guy.”  At the time of his death, he was just 22 years old.

How many other aces were there in RCAF 411 Grizzly Bear Squadron and who were they?


J. J. Boyle is my grandfather.

JJ Boyle gets a mention in my book Spitfire Elizabeth and the Roaring Boys – the amazing true story of one Spitfire and 411 Squadron. I have a Spitfire Elizabeth Facebook, Instagram & Twitter pages which provide updates and history of this 411 Spitfire which flies again today. Nick Oram


Hi Ted
Jack, as Branch manager at RBC, Walkerville Branch, was my first boss after high school. If he is still around, please pass along my greetings.
Jim