In 1942, Glenn Miller was at the peak of his career, performing in sold out concerts across the United States. His record albums were fast sellers. Nonetheless, it had been only two years since his swing band and unique sound had grown popular. As musical stars went, he was a new one, yet to take advantage of his fame and build a significant fortune. Then America entered World War II. Ever a strong patriot, Glenn Miller tried to sign up. He appealed to the US Navy for a commission but was told he was too old. Using personal connections to get the ear of an Army General, Brigadier Charles Young, he managed to wrangle a commission and the opportunity to transform American military music. Assigned to the US Army Air Forces, Glenn Miller was soon at work, taking his unique sound by plane around the world. Yet within two years, Glenn Miller would die in the line of duty and — to this very day — he remains “Missing in Action”. 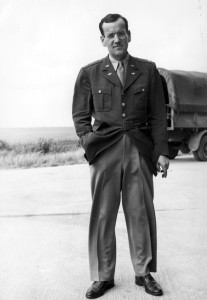 Famous Songs and a New Sound

With his assignment to the USAAF, he build a new band and, taking the same strategy that had worked in civilian life, brought them practice relentlessly — to perfection.  He played many of his famous civilian songs such as Chatanooga Choo Choo, Moonlight Serenade, In the Mood, American Patrol, Pennsylvania 6-5000, and A String of Pearls — this time not for adoring civilian fans but rather for American airmen and ground crew members in a series of small concerts at the unit level.  He began making tours of bases, playing to Bomb Groups and Fighter Groups, among others, sometimes even in small hangar concerts and dances. 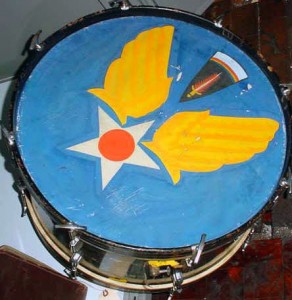 To his popular songs from the pre-war days, he added new songs as well, including some written while he was awaiting word on his failed application to the Navy and during the period he was petitioning the Army for the opportunity to assist in the war effort.  These songs included, I’ve Got a Gal from Kalamazoo, At Last, Seven-O-Five, Boom Shot, Morning Mood and others.  As well, he wrote many songs that were specifically for the Army Air Force Band, such as I Sustain the Wings, The Technical Training Command, SHAEF Presents, Passage Interdit, Snafu Jump, Flying Home, Going Home, Enlisted Men’s Mess, and Jeep Jockey Jump.   Many of these later songs are not as widely known as his pre-war hits, even if they are every bit as lively and brilliant in their harmony. 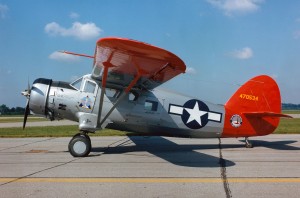 A UC-64 Norseman, the type of aircraft in which Glenn Miller flew his final flight. Photo Credit: USAF Museum

The Mystery of Glenn Miller’s Disappearance

On December 15, 1944 — today in aviation history — just a little more than two years after joining the Army and setting up the Army Air Force Band, Glenn Miller climbed on board a UC-64 Norseman (s/n 44-70285) and departed RAF Twinwood Farm, near Bedford, England, for a trip across the English Channel to France — in fact, he was flying to what was then called USAAF Station A-42 — more properly, it was one of France’s most famous airfields, at Villacoublay (Versailles).  It was supposed to be yet another flight to yet another venue for another performance for the troops — this one was special, however, as his band was going to perform its first of a series of concerts to celebrate the liberation of Paris.

Sadly, Glenn Miller never arrived in France.  What happened to him remains a mystery to this day.  There are four main theories — two seem likely, one is possible but not probable, and the last is completely outrageous.

The first theory is straightforward — while flying across the English Channel at low altitude, his pilot strayed into a designated zone in the midst of the Channel where bombers returned from aborted raids on Germany would salvo their bombs into empty waters (it was too difficult and dangerous to land a bomber with a full bomb load).  By the account of one RAF navigator on board a returning Lancaster bomber from an aborted night mission targeting Siegen, Germany, a group of Lancasters (138 in number) salvoed full loads of incendiaries.  Looking down, he saw a small UC-64 Norseman below.  Before he could call out a warning, he saw the plane go down in a shower of water, apparently hit or downed by the bomb splashes. 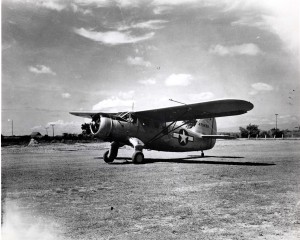 The second theory is equally plausible — Glenn Miller accepted a seat on a Colonel’s UC-64 Norseman for a flight to Paris.  Anxious to rejoin the band in France, Miller elected to fly across.  The Norseman’s pilot, however, was fairly inexperienced and, records show, he had been denied flight clearance the day before since he was approved only for “local” flying.  Additionally, it later was uncovered that the plane’s carburetor deicing bypass valve had been removed for maintenance.  In the morning as they prepared, a cold fog moved in across the Channel and southern England.  The pilot elected to make the flight anyway — en route, suffering from carburetor icing in the moisture-laden air, as the theory goes, without carburetor deicing, the carburetor fouled and the ice build-up eventually cut fuel flow to the engine.  A crash into the cold December waters of the English Channel would mean that any survivors, if not in a raft, would have perished within 20 minutes from hypothermia.  Why no final Mayday call was made is a bit of a mystery, however. 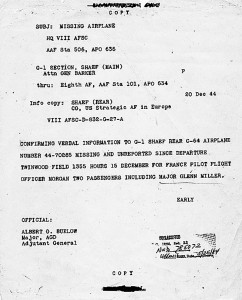 Copy of the original message that conveyed the report of Miller’s aircraft being missing.

The third theory is interesting but quite unlikely.  It was related by a anti-aircraft artillery gunner named Clarence B. Wolfe, claims that his unit, Battery D, 134th AAA Battalion, US Army, shot down Glenn Miller’s plane in an accidental friendly fire incident near Folkestone, England.  The problem with Clarence Wolfe’s claim is that his own records claim that his unit shot down Miller in September 1944 — yet it is absolutely certain that Miller was alive afterward, since he played several other concerts. 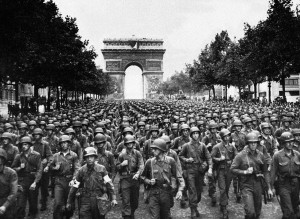 The liberation of Paris in 1944 — American troops march down the Avenue des Champs-Élysées. Photo Credit: Voice of America

Finally, the fourth and last theory is simply outrageous.  In this recounting, Glenn Miller arrived in Paris after all, but died of a heart attack while visiting a Parisian bordello (Miller was married and his wife was awaiting him in the USA).  As this story goes, the Army then covered up the death due to its unfortunate circumstances.  They fabricated his disappearance so as to preserve his fine service record and reputation as well as to keep his memory in a positive light.  This claim was outlined by a German journalist named Udo Ulfkotte, who bases his story on a series of Freedom of Information Act Requests that he states provide complete details of the real story, the cover up and the subsequent Army propaganda campaign to celebrate Miller as a hero, even in death.

There are scattered reports that his plane was recovered off the coast of France — true?  Frankly, it isn’t clear.  At some point the plane’s wreckage may well be found.  An interesting new tidbit did emerge, however, in January of this year — a 17 year old plane spotter recorded a UC-64 Norseman going overhead his area that day.  It was likely the plane with Glenn Miller on board.  Notably, it showed him to be on time and not deviating east toward the drop zone, which to some extent invalidates the bombing theory as an explanation of his loss.  Maybe it really was icing and inexperience after all?

By all accounts, Glenn Miller loved his time in the Army.  It is interesting to note that in all, he was a superstar swing jazz musician for just five years before his untimely death — two of those were in uniform.  To this date, his legacy remains strong — even if Glenn Miller is still listed officially as “Missing in Action”.

We can think of no better way to celebrate the memory of Glenn Miller and his music than to feature a short film of one of his performances during the war — Glenn Miller and the AAF Band at High Wycombe in England during 1944.

What other famous musician in history joined the US Military and performed in uniform?


Well, Glenn Miller said it in the clip: Artie Shaw: Clarinetist, band leader, composer. Played for the Navy in the Pacific Theater.


The local TV station played “The Glenn Miller Story” starring my favourite actor and B-24 pilot, Jimmy Stewart, yesterday. Good to see someone else remembered !