Kanichi Kashimura was a Pilot Officer Third Class with the Japanese Navy.  Sent to China in October 1937 and assigned to fly with the 13th Air Group, he soon entered combat flying a Type 97 “Claude”.  On November 22, 1937, he scored two kills against the Chinese over Nanjing.  Then, on December 9, while flying another patrol over Nanchang, he and his flight encountered another group of Chinese aircraft.  These were the newer, more powerful Curtiss Hawk Model 75s that were supplied by the United States.  Engaging them, he soon shot down another aircraft — his third kill.  Then he tangled with another.  In the midst of the turning fight that followed, suddenly, his plane collided with a third plane, severing slightly less than half of the outer portion of his wing. 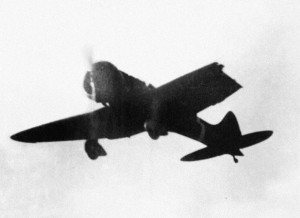 PO3c Kanichi Kashimura’s Type 96 “Claude” with part of its left wing missing from the aerial collision.

Can a Plane Fly with One Wing?

As PO3c Kanichi Kashimura’s aircraft rolled into the missing wing section, instinctively, he applied full opposite aileron in an attempt to arrest the roll.  Somehow, the roll stabilized.  Further, he was able to bring the plane to level flight.  Who he had collided with was a mystery, but it didn’t matter to him at the moment — perhaps it was one of the planes from his own flight, though it wasn’t clear.  As he looked to the left, he could see that the outer part of his left wing was completely severed from his aircraft — a nearly perfect cut.  Somehow though, his plane continued flying.  He managed to hold it level and avoid a crash as he disengaged from the swirling dogfight.  Gingerly controlling the plane with the aileron, he slowly turned toward his base.  It was a long way home. 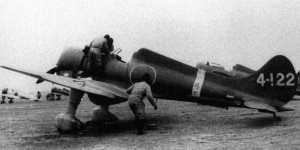 Type 96 Claudes of the 3rd Air Group, planes which flew with Kanichi Kashimura in China.

Somehow, Kashimura navigated his crippled plane back to his base, despite exhaustion from the continuous strain of holding the stick hard over against the opposing aerodynamic pressures.  Arriving at his base, however, he realized that the plane would be very difficult to land, if not even impossible.  Determined to try and save his plane, he made an approach, but realized that he would be unable to land.  If he slowed the plane, the aileron authority was reduced and the plane started to roll. Twice more he went around, each time trying to work out how to land and each time, as he slowed, the plane would start a roll into the missing wing section.

A Japanese Type 96 (A5M) Claude, the type as flown by Kanichi Kashimura on his missions against the Chinese, in which he scored 12 victories.  On the date of his combat in which he lost a wing, his tail numer was 4-115.

Finally, on the fourth attempt, he held a higher speed.  This prevented the roll, but it was too fast for a safe landing.  Nonetheless, he flew the plane onto the ground and held it until the main wheels touched the grass.  As the main wheels touched, however, the sudden ground drag pulled the plane’s nose over forward.  The propeller dug in and in an instant, the Type 97 “Claude” flipped over and smashed into a complete wreck, the tail of the plane completely separating from the twisted remains of the front half.  Such planes had no canopy nor rigid spine to protect the pilot and therefore everyone watching felt that he was sure to have been killed.  Nonetheless, Kashimura climbed from the wreckage, dazed but somehow unhurt. 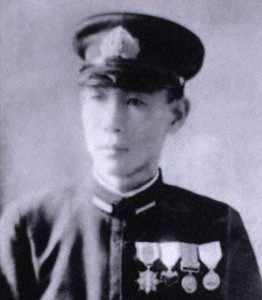 Portrait of Kashimura after his return from China.

Back in Japan, news of the event passed rapidly up the chain of command at Naval Headquarters.  The Japanese nation was in need of heroic stories and good news — and here was PO3c Kashimura, who they quickly labeled “the pilot who returned on one wing”.  Moreover, he was already a hero with three kills.  The government issued news releases highlighting his incredible feat.  The story only gained further traction as the newly famous aviator flew more missions and engaged yet more Chinese aircraft — shooting more and more from the sky.  By the time he returned to Japan to take a role in the training command, he had amassed no less than twelve kills and had emerged as one of the leading aces of the Chinese war.

After serving at Yokosuka teaching others to fly, PO3c Kashimura returned to combat yet again in China.  This time, however, he found that the Chinese air force had been long before decimated.  With few opponents, most of his Air Group came back from each mission with nothing to claim.  After a full tour, he returned to Japan and resumed yet another a training position which he held until well after the attack on Pearl Harbor in December 1941.  With the US and Japan now at war, he was sent back into combat — this time against the Americans.  Unlike the Chinese, he found the American pilots were better trained and their equipment was both sturdy and more capable, a new generation since the earlier Curtiss Hawk’s he had fought over China.

In October 1942, Kashimura was promoted to Warrant Officer.  Assigned to the 582nd Air Group, he was deployed to New Guinea and given a new airplane to fly — the Mitsubishi A6M2 Zero.  On March 6, 1943, he was sent on an escort mission during a raid against American forces in the Russell Islands.  The Val dive bombers he was defending were attacked by P-39 Airacobras of the US Army’s 67th Fighter Squadron.  Despite the dogfight that ensured, Kashimura’s A6M2 Zero was not shot down — nor did he down any of the Americans.  On the return flight, however, he engaged another group of American aircraft, this time a US Marine Corps flight from VMSB-132.  There, 15 miles southeast of the Russell Islands, while making an attack, he was likely shot down by S/Sgt Robert H. Banner, the rear gunner on one of VMSB-132’s SBD Dauntlesses.

Many years later, another aircraft returned with one wing — in fact, it was missing an entire wing, not just the outer third!  The aircraft was an F-15D Eagle with the Israeli Air Force (IAF).  While in an engagement with some A-4N Skyhawks during practice air combat maneuvering, the two planes collided, the Skyhawk exploded and the pilot was ejected by the automatic system.  The F-15D, however, soldiered on with full opposite aileron input from the pilot.  Though the instructor pilot ordered the stricken aircraft’s pilot to eject, he overruled him and made a wide turn to return to his base in Negev, finding the F-15D’s lifting body was sufficient to keep it flying under control.  He made a straight in approach and landed without further incident, saving the airplane.  For disobeying his instructor’s order, he was demoted — but then he was promoted immediately back to his former rank for saving the airplane.


The Chinese also flew the Dewoitine 510.


A decade or so ago i found an excellent Swedish website fully detailing the Chinese exploits over China against the Japanese warplanes. The stories were quite unreal. But backed up with eye witness accounts. The famous line of Curtiss Hawk biplanes was well used by the Chinese. Their top speed was slower than mot of their opponents. But bombers cruise along so could be caught.

One Hawk dove down and shot down a Nell bomber from a formation. By looping the Hawk, the pilot came up and down again into the formation. And got another Nell.

The A5 Claudes were lethal but vulnerable opponents, the site said. The Chinese also used Gladiator biplanes. The Claudes were faster and used dive and zoom tactics to kill the Gladiators. But one Chinese pilot countered this by diving down onto the Claude who had just dove down upon him. And was rammed by the Gladiator! And killed.

Another Claude was looping all the time. Its pilot was shot dead in his chest and held the stick in a death grip to his belly, thus looping till his fuel ran out.

Also over the ocean, five Claudes were lost as sea with pilots due to getting lost and fuel starvation when they couldn’t find their carriers.

The Claude was quite a fighter and the Chinese were good pilots, a fact most people aren’t aware of.

If i can find the site link, i’ll post it.