As Navy Lieutenant Clarence E. Dickinson nosed his plane over, the submarine he had spotted northeast of Oahu threw up a hail of defensive anti-aircraft fire.  Ill-aimed, the tracer fire flashed close by as Dickinson focused on his bombing run.  He pulled the release and the SBD Dauntless dropped its bomb.  Then he pulled back on the stick, hauling the plane out of its steep dive and escaping to a safe distance from the submarine.  As he pulled off the target, Lt. Dickinson looked back and saw the bomb strike adjacent to the submarine.  It appeared to heel over and settle into the water as if sinking.  He made a wide circle to observe but then turned back to base as he relayed a radio report of the attack, having observed the submarine settle below the waves.

The action happened on December 10, 1941 — today in aviation history — and it was just three days after Japan’s surprise attack on Pearl Harbor. Scouting Squadron Six, which had suffered so badly on December 7th, was itching to even the score.  For Lt. Dickinson, the matter was also personal — he had lost his rear gunner during that terrible day in aerial combat against the Japanese over Hawaii, after the gunner had downed a Japanese Zero over Oahu. 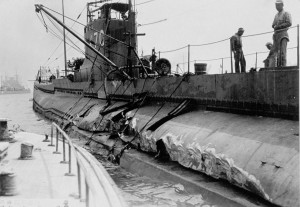 The I-70 in port during May 1941 after a collision with the submarine I-69 during exercises. The submarine was repaired and sent to support the Japanese attack on Pearl Harbor.

The Mission of the Japanese Submarine I-70

The I-70 had been deployed to the waters around Hawaii with several other Japanese fleet submarines, many of which carried the “special submarines”, which were Japan’s midget subs that had tried to penetrate Pearl Harbor’s inner waters to launch torpedoes point blank against the US Navy’s largest ships.  Beyond the launching of the midget subs, the missions of these submarines were varied, first to report on the movements of American ships; second to attack any American ships that attempted to escape out of Pearl Harbor during or after the attack; third, to rescue any downed aviators who might have not made it all the way back to the aircraft carriers after the attack or who were damaged and had to ditch in the sea; and last, pick up the surviving midget submarine crews after the completion of their missions.  To accomplish this dangerous mission so close to Hawaiian waters meant that during the days, the submarines would be submerged and at night they would run on the surface.

The midget submarines were largely stopped by American defenses and ships, though one penetrated the harbor and may have fired one of the torpedoes that struck the USS Oklahoma (and some would argue as well the USS Arizona).  One was sunk by gunfire from the USS Ward, another was sunk by the USS Monaghan, a third was found abandoned in the Keehi Lagoon after the crew attempted to scuttle her (in accordance with orders once the mission was completed), and the last was beached off Waimanalo, with one crew member killed the other captured (the first prisoner of war in the Pacific conflict with Japan).  There is a reasonable chance that the crew that scuttled their boat in Keehi Lagoon may have escaped to the beach and been picked up by the I-70. 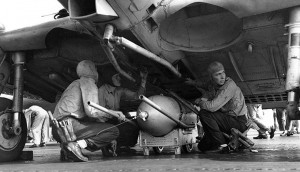 Ordnancemen of Scouting Squadron Six (VS-6) load a 500 pound demolition bomb on an SBD scout bomber on the flight deck of USS Enterprise (CV-6). Photo Credit: US Navy

On December 9, 1941, while holding station just 4 miles off the coast of Hawaii at Diamond Head, the I-70 reported spotting the USS Enterprise entering Pearl Harbor — this would be the last contact with the submarine.  Later that night, another submarine, the I-6, reported another aircraft carrier to the northeast and the Japanese command issued orders to all submarines to pursue it.  Though no message receipt was heard, the I-70 apparently proceeded at maximum speed to the northeast.

In the early morning of December 10, 1941, not long after the sun rose, an SBD-2 Dauntless from the USS Enterprise’s Scouting Squadron Six spotted the I-70 still running on the surface.  Piloting the plane was Ensign Perry L. Teaff and he attacked the I-70 with his single bomb.  The explosion rocked the submarine and apparently damaged her.  In the afternoon, another aircraft from the USS Enterprise, from Scouting Squadron Six, and piloted by Lt. Dickinson spotted the submarine running on the surface — apparently the damage was such that it could not submerge.

His attack commenced with a rapid climb to 5,000 feet for a classic dive bomber vertical attack.  In an attempt to evade, the submarine made a turn to starboard while its gunners on the deck opened fire with the sub’s 13 mm machine guns.  Lt. Dickinson’s bomb struck alongside the submarine amidships and the blast force threw the gunners into the water.  As Lt. Dickinson watched, he noted that the I-70 had stopped and then started to settle into the water — within 45 seconds, it had disappeared below the waves, leaving the machine gunners flailing in the water.   Circling back, he spotted a large oil bubble and foam on the surface with debris.  He reported the sinking based on that as having happened at 23 degrees 45′ North latitude, 155 degrees 35′ West. 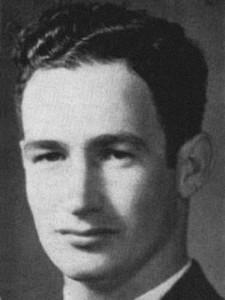 Did Dickinson Sink the I-70?

At the time, Lt. Dickinson was credited with the sinking of a Japanese submarine.  When Naval ships arrived at the scene, they found no evidence of the submarine, nor of the four sailors who had been thrown overboard by the blast.  The next day, however, while aboard the USS Enterprise, Lt. Dickinson was topside and observed a US destroyer engaging and attacking a Japanese submarine that had been stalking the US aircraft carrier on the surface — as it was daytime, this was undoubtedly the damaged I-70.  As Lt. Dickinson related:

“The two vessels were practically touching as they passed; and that was when the destroyer’s depth charges were going over into the water; not one at a time and spaced, but six or more closely grouped.  We could feel shocks.  We saw that water rise as if right below there was an active volcano.  The bow of the submarine was flung out of the sea.  We saw almost half of the craft.  Then it fell back but only to be caught by a second series of depth charges and again the bow was thrown up.  This time the stern was submerged and the bow stayed up.  The submarine was caught there, at an angle of sixty or seventy degrees just for an instant.  Then she slid down into the sea.”

With confidence, the US Navy declared that destroyer’s attack on the submarine to have been successful and it was sunk.  In retrospect, it seems that Dickinson’s aerial attack on the submarine on December 10, may have further damaged but not sunk the submarine.  With confidence, we can say that the submarine that was thrice attacked was the I-70.  None of the other returning submarines reported an aerial engagement nor an attack by a destroyer with depth charges, further supporting that case.  Of those that departed to assist in the attack on Pearl Harbor, only the I-70 did not return, which implied that it had been sunk. 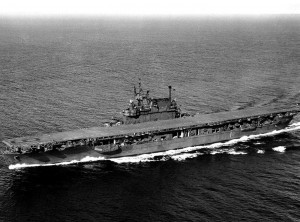 The USS Enterprise (CV-6) — one of America’s leading aircraft carriers in the Pacific War. Photo Credit: US Navy

As it happened, Lt. Dickinson was lucky enough (or unlucky enough, depending on your perspective) to have been in the thick of it right from the start of America’s entry into World War II and to observe a number of critical events early on, first hand.  Lt. Dickinson would go on in the US Navy to a distinguished career, participating in the penultimate mission of the Battle of Midway, in which the Enterprise’s air wing sank the Kaga and Akagi (battles in which he flew).  He would retire from the US Navy long after the end of the war with the rank of a Rear Admiral.


I am trying to locate a wreck of a Japanese destroyer in PNG that was bombed and filmed by cameras on B-25s. Could someone assist in locating this footage so the vessel can be located? I am more than happy to give further details if responded to.