Many of us know very well the yearly fun brought to old and young alike by NORAD and their tracking mission each year to watch over Santa as he flies around the world delivering presents.  It has been a tradition, in fact, since 1955 — and thus, this year is the 57th anniversary of the first NORAD Santa tracking mission.  Yet most don’t know that the entire operation actually began by mistake….

It happened that way, 57 years ago tonight.  It all began with a simple typo.

The Typo that Went Down in History

In Colorado, deep in the mountains, behind blast-proof doors is the readiness center of America’s national security.  It is a complex with the most serious of purposes, to watch for incoming bombers or missiles that might target America.  For years, everything about NORAD was SECRET and TOP SECRET — even the phone numbers. 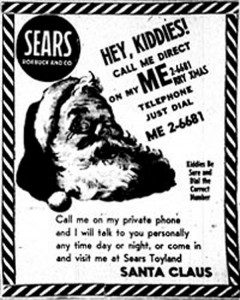 The original typo — the Sears add that “went down in history”. Source: NORAD

Not far away, at Sears store in Colorado, the marketing department had a great idea for Christmas.  They thought, why not set up a special phone number for children to be able to call if they wanted to speak with Santa Claus.  It was a smart marketing trick and they advertised the number far and wide.  Yet there was a small problem — somehow, a typo slipped in and, instead of the Sears phone that was manned to receive the Santa calls, they somehow happened upon a type that gave the direct number to NORAD’s Director of Operations at its Continental Air Defense Command — Colonel Harry Shoup, a former fighter pilot. 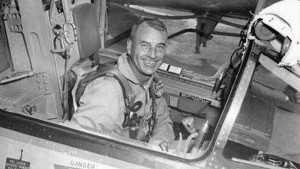 As you can imagine, it wasn’t long before the first child called the NORAD Hotline — it was a young girl.  As was customary, Col. Shoup picked up the phone with his official voice — “Yes, Sir!”  Yet in response he heard the young girl ask quietly, “Are you Santa Claus?”

Recognizing intuitively that the child must have dialed the wrong number, he adjusted quickly, thinking it was a one-time mistake.  Softening his voice, he replied gracefully, “Yes, I am.  Have you been a good little girl?”  After that, the phone continued to ring — more and more — with the voices of eager children on the other end asking for Santa.  It didn’t take long for the staff at NORAD to work what was happening.  Despite the seriousness of the NORAD mission, everyone saw the humor in the situation and thus, right from the start, Col. Shoup ordered his staff to handle the calls in the same manner he had and to provide position reports for Santa sleigh to any children who called.

Naturally, as soon as Christmas passed, the calls ended and NORAD could get “back to business”.  However, a curious thing happened as everyone really liked the experience.  Thus, they decided to do it again the following year, though not as a typo from the local Sears but rather as a planned public outreach program.  Thus, NORAD began its tradition of reporting on Santa’s progress on Christmas Eve every year since. 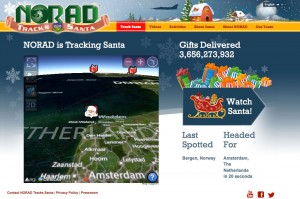 Santa heading toward Amsterdam to drop gifts off. Source: NORAD

A Tradition is Brought Forward to Today

Today, 57 years after that typo, we continue to celebrate NORAD’s tradition once again tonight.  Nowadays, you can tune in and watch Santa’s progress online (everything is on the Internet, of course) and even see films of Santa at work.

Happy Holidays to everyone from all of us here at Historic Wings!

A Special Request this Evening

As you celebrate your holidays this year, remember that all around the world, there are soldiers, airman and Naval personnel (and Marines, Coast Guard and Merchant Marine too!) who are working and standing watch to keep us safe.  Some are near, some far away and many serve in dirty, dusty and dangerous places, making each their own sacrifice for you and me, for all of us, so that we (most of us) can celebrate this year once again in peace.  They deserve our thanks, not only tonight and tomorrow, but every day for what they do.

Thus, we have a small request of you — please email a soldier tonight, whether it is a friend, a family member, a distant cousin, or just someone you know.  Tell them thank you for their service.

One More Note — a Video from NORAD