On December 24, 1968 — 44 years ago + one day — while orbiting the Moon, the three man crew of Apollo 8 took a rare step and broadcast a religious message from space back to Earth.  Although there were those who stated that the crew violated the principles of separation of church and state, the vast majority of those listening recognized that what they did was profound and historic, whether we, as listeners, were religious or not.  In short, they read the first lines from the Book of Genesis, a religious text that spans all three of the world’s major religions. 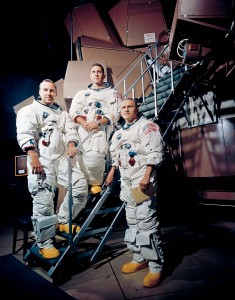 The crew of Apollo 8 — from left, Lovell, Anders and Borman. Photo Credit: NASA

The Reading of Genesis

“We are now approaching lunar sunrise and, for all the people back on Earth, the crew of Apollo 8 has a message that we would like to send to you.
In the beginning God created the heavens and the earth.
And the earth was without form, and void; and darkness was upon the face of the deep.
And the Spirit of God moved upon the face of the waters. And God said, Let there be light: and there was light.
And God saw the light, that it was good: and God divided the light from the darkness.” 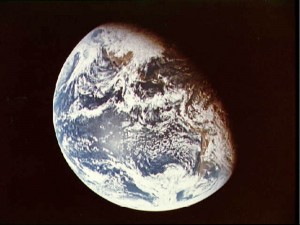 View of the Earth from Apollo 8. Photo Credit: NASA 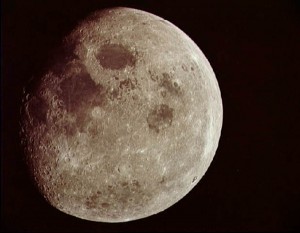 View of the Moon taken from aboard Apollo 8. Photo Credit: NASA

Finally, Frank Borman, the Commander, ended the reading and signed off with a final word from the crew to all on Earth:

“And God said, Let the waters under the heavens be gathered together unto one place, and let the dry land appear: and it was so.
And God called the dry land earth; and the gathering together of the waters He called seas: and God saw that it was good.
And from the crew of Apollo 8, we close with good night, good luck, a Merry Christmas — and God bless all of you, all of you on the good Earth.” 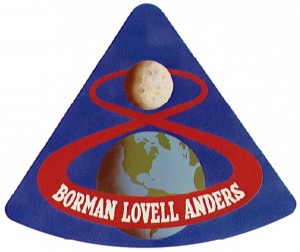 The rather inspired Apollo 8 mission patch — the “8” forming the loop of the space craft between the Earth and the Moon. Photo Credit: NASA

Years later, in 2008, Frank Borman was asked to explain how the astronauts decided on the text.  He replied simply, “We were told that on Christmas Eve we would have the largest audience that had ever listened to a human voice.  And the only instructions that we got from NASA was to do something appropriate.” 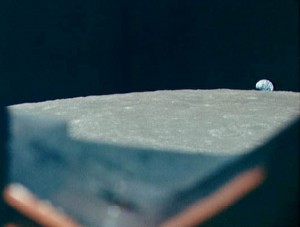 A low resolution image of the Earth seen as it crests the surface of the Moon during the Lunar orbit. Another, higher resolution image followed — the famed “Earthrise” photograph. Photo Credit: NASA

It would seem that the astronauts view of “appropriate” was nothing less than inspired, even if the reading sparked some controversy.  Even today, it remains one of the most memorable moments of the entire Apollo Program, a venture that landed the first men on the Moon — perhaps the supreme achievement of mankind to date.  That the crew completed the reading while in Lunar orbit puts new perspective on the text — all the more so done in the midst of the Christmas holiday. 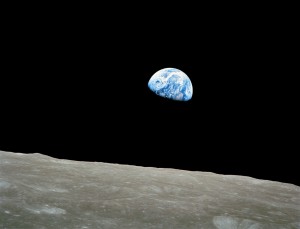 During Apollo 8, on Christmas Eve, Astronaut Anders also snapped one of the most famous images ever of the Earth. Photo Credit: NASA

Someday, mankind will set foot once again on the surface of the Moon.  Progress into space has been slower than originally planned or intended, despite the force of hundreds of millions of dreams and hopes.  When the next man stands on the Moon and looks back at the Earth, we can only hope that they will do so with the grace, class and wisdom of those first men who, under the Apollo Program, went where no man had gone before.

Today in aviation history, on Christmas Day 1968, the crew of Apollo 8 remained in space.  They would return to Earth to a successful splashdown on December 27, 1968.