The Sinking of the USS Panay

On this date in aviation history in 1937, in the midst of Japan’s ongoing attacks against Nanking, China (now Nanjing), Japanese Navy aircraft again appeared in the skies over the Yangtze River.  Observing the ongoing air attacks against Chinese civilians in Nanking was the USS Panay, an American Navy gunboat that served to represent and protect American interests in China as a part of the US Navy’s Yangtze Patrol of the US Asiatic Fleet.  The gunboat was serving on a humanitarian mission of evacuating the last few Americans and foreign dependents from Nanking before arrival of the Japanese Army to the city (what would later be known as the “Rape of Nanking”).  As often observed, Japanese warplanes circled overhead.  In the past, they would dive on Nanking.  This time, however, the Japanese turned their attention to the Americans, a neutral nation, not at war with Japan.  For the next thirty minutes, they would relentlessly bomb and strafe the American gunboat and other Western ships nearby. 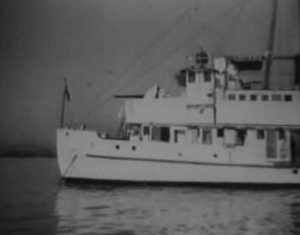 The USS Panay steams up the Yangtze River on the morning of the attack. Source: Films by Norman Alley, Universal News; and Eric Mayell, Movietone News

In accordance with treaty and international agreement, the British and Americans maintained a small fleet of gunboats on the Yangtze River whose mission it was to support and protect civilian ex-patriots who had homes, properties and businesses in Shanghai, Nanking and along the river.  As well, the gunboats protected Western commerce and shipping from piracy and other threat.  The Yangtze River in 1937 was a somewhat untamed zone, with uncertainties and shifting political interests.  The gunboats were sometimes involved in a dangerous missions as a result.  Nonetheless, the Chinese government was as committed as the British and American governments to ensuring stability and keeping open, successful trade relations.  Unable to patrol its own inland waterways, the Chinese had invited the West to do so. 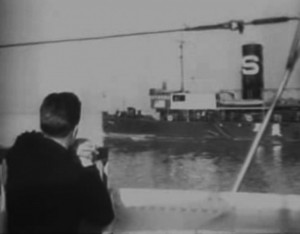 All of this become to erode, however, once Japan invaded China in the Summer of 1937.  The war evolved quickly with a rapid advance of Japanese forces into the heartland of China.  The Japanese proved to be a truly imperialist, powerful force hellbent on the domination of China — they also proved capable of immense, unfettered brutality.  Within the Japanese military, there were those itching for a fight with the West as well.  Calmer, cool hands retained control of Japan’s foreign policy and despite the pleas of the militarists that the American and British interests in China were valid targets, the Japanese government forbade action. 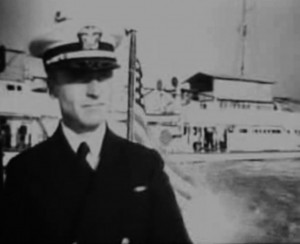 The Captain of the USS Panay, US Navy Lieutenant Commander J.J. Hughes, on the very day of the attack. Source: Films by Norman Alley, Universal News; and Eric Mayell, Movietone News

The Attack on the USS Panay

During the morning of December 12, 1937, the USS Panay had taken on the last four staff from the US Embassy in Nanking as well as ten civilians.  This completed the evacuation of Americans from Nanking.  The ship’s crew constituted five officers and 54 enlisted men.  Nearby, a pair of British gunboats, the HMS Bee and HMS Ladybird also cruised.  Three tankers from Standard Oil’s Nanking office also steamed nearby.  These ships carried fuel and also loaded Standard Oil employees, local hires and families to evacuate them from the path of the oncoming Japanese Army advance.  Together under the guidance of the USS Panay, the ships set out to steam upriver from Nanking to get clear of the combat zone. 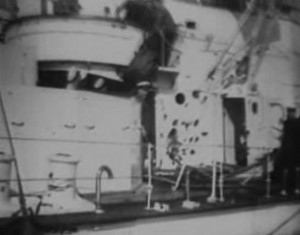 Suddenly a flight of three Yokosuka B4Y Type 96 bombers from the Japanese Navy appeared and began an attack on the American and British vessels.  On all of the ships, flags were waving clearly.  Further, huge flags had been painted on the decks and canopies topside, leaving little doubt that the ships were not Chinese.  Thus, the attack came as a surprise. 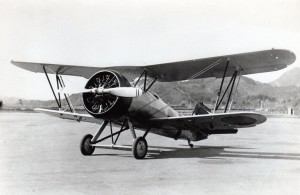 A Nakajima A4N Type 95 fighter, the type used to strafe the USS Panay.

As the bombs rained down, additional aircraft from the Japanese Navy also arrived — these were Nakajima A4N Type 95 fighters.  The fighters began repeated strafing runs against the ships.  Aboard the gunboats, the crews assumed battle stations and opened fire with the limited anti-aircraft weapons they had aboard, mainly pylon mounted, drum-fed 30-caliber machine guns.  Even if (by later standards), the Japanese air attack was a slowly evolving affair of periodic strafing runs and ill-aimed bombs, the American return fire was also largely ineffective.  The Japanese planes made attack after attack, unhindered. 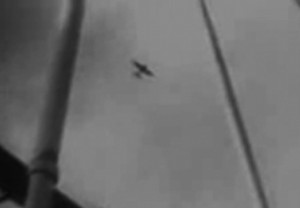 Soon the three Standard Oil tankers were hit and ablaze.  Two sank in the river while the third ran aground to save itself.  The British gunboat was not hit by any bombs but was strafed mercilessly.  There were casualties on all of the vessels.  The USS Panay was struck by two bombs.  She began to take on water.  As the crews fought on, firing against the Japanese planes, a total of 18 bombs were dropped — almost all missed.  These were the standard light bombs of the Japanese Navy at that time, 132 pounds in weight (60 kg) each.  Given the damage that even these light bombs had achieved to the shallow draft river gunboat, the Captain had no choice but to give the order to abandon ship.  Even then the attacks didn’t cease.  The planes made attempts to strafe the motor launches as they took the wounded and others off the USS Panay and made their way to a nearby river island. 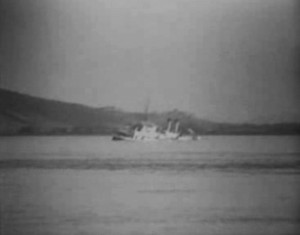 Once ashore, the men watched as the USS Panay slowly sank out of sight into the deep channels of Yangtze River.  As Japanese planes patrolled overhead, they hid in the reeds, fearing attack by the strafing fighters.  Finally, with the departure of the planes, the men of the USS Panay made their way off the island on sampans and then walked overland toward friendly towns downriver.  Along the way, with medical care so distant, three of the most critically wounded died.  In all, 43 sailors of the USS Panay were injured as well as five of the ten civilians that had been aboard.  An untold number of had died on the Standard Oil tankers. 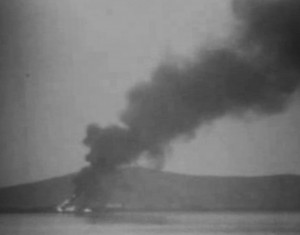 One of the Standard Oil ships ablaze on the Yangtze River. Source: Films by Norman Alley, Universal News; and Eric Mayell, Movietone News

Back in the USA, cryptographers decoded Japanese Naval signals and documented that the Japanese had known all along that the vessels were British and American.  The attack, the US analysts realized, was an attempt to draw America into the war.  While this wasn’t Japanese government policy, it did represent the rogue interests of the hardline, militarist wings of Japan’s armed forces — groups that were increasing in power and influence with Japan itself. 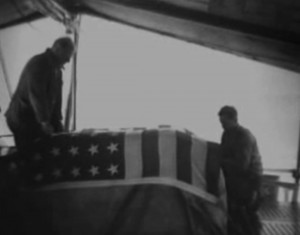 Casualties of the USS Panay, in flag-draped coffins, are conveyed by boat to Shanghai after the attack. Source: Films by Norman Alley, Universal News; and Eric Mayell, Movietone News

As it happened, despite the public outcry, the surprise attack by the Japanese Navy did not bring America into war.  Indeed, the Japanese government issued a formal apology and compensation was paid for the loss of the vessel and casualties suffered.  The Japanese claimed that it had been a dreadful mistake.  Though President Franklin Delano Roosevelt recognized the dishonesty, he too sought to avert war.  Rather than encouraging cries of a variation of the call to “Remember the Maine” — the sinking of the US Navy ship Maine in Havana harbor which drew America into war with Spain — Roosevelt felt it better to accept the apology and compensation. 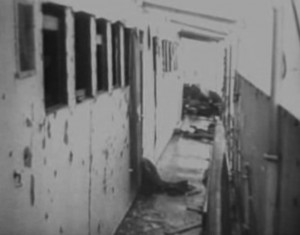 Final images of the USS Panay, its structures riddled with gunfire from air attack; these images captured as the ship was being abandoned. Source: Films by Norman Alley, Universal News; and Eric Mayell, Movietone News

Nonetheless, within Japan, the militarists would slowly ascend in power and influence until finally, just four years later almost to the very day, they would finally get their wish for war with America.  They would attack Allied interests across the Pacific, starting with Pearl Harbor, Wake, the Philippines and moving on to a host of other small islands and trusts.  As well, they would target Australian, Dutch and British holdings.  Soon the war in the Pacific would be in full swing.