“This interesting hydro-biplane, which has been flying almost daily through the past year over Lake Windermere, may be said to have originated at Blackpool way back in 1909.  This, perhaps, seems rather curious, since as far as our mind takes us back, power-driven flying machines to rise from water were scarcely even dreamt of at that time.  It happened in this way.  Most of those who now constitute the Lakes Flying Company were present at that memorable meeting.  One of their number, Mr. E. W. Wakefield, was more than usually struck by the amount of damage that was done through a machine, its pilot, or both, hitting solid ground.  It occurred to him that if a machine could be made to rise from and alight on water and remain for the whole time over that liquid element, the chances of fatalities arising from accidents could be most effectively and materially reduced.” 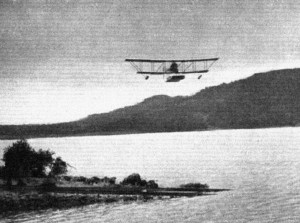 So began this week’s issue of Flight, the newsletter of the Royal Aero Club, 100 years ago today.  A major part of the issue was dedicated to the “Water Hen”, an early seaplane design (they were called “hydro-aeroplanes” at that time).  The aircraft was developed and flown by the Lakes Flying Company on Lake Windermere up in the Lakes District of England (approximately 100 miles north of Liverpool and equally 100 miles northwest of Leeds).  The design was quite extraordinary –and there were many who claimed that no such thing as a plane that could take off from a lake was truly possible or viable, as the writers from Flying explained:

“But at that time everyone was skeptical.  The whole thing was impossible!  It stood to reason that the friction and resistance of a hydroplane float skimming over water would be infinitely greater than that of wheels running over ground.  Further than that, as soon as the motor was started, would not the thrust of the propeller, necessarily high up between the planes threaten to push the nose of the float under water?” 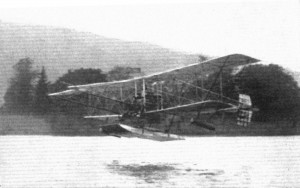 Indeed, the difficulties of designing a successful flying boat, or hydro-aeroplane, or seaplane, or whatever one wished to call it, were quite significant.  In France, Voisin had been working on a design with Bleriot.  Others, including Farman, had developed reasonable designs.  The design of the Water Hen took into account virtually every other “hydro-aeroplane” that had been attempted.  Overall, however, the field was still quite new, so even then, there weren’t a lot of other aircraft to consider.  What was surprising too was that the investors and designers in the new Lakes Flying Company’s hydro-aeroplane considered that taking off and landing from the water was easier than from a runway — nothing could be farther from the truth, in fact. 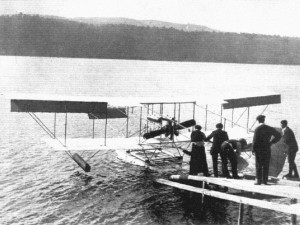 “But, nothing daunted by general adversity of opinion, Mr. Wakefield and a few of his personal friends decided at any rate, to make a sporting effort at producing a successful water flying-machine.  The experiments of Mr. Henri Fabre, at Monaco, with his extraordinary hydro-monoplane, and those of Glen Curtiss, in the United States of America, with his float-equipped biplane, were closely followed, and they taught many lessons.  Then, again, Mr. Oscar Grosspelius had constructed a Bleriot-type monoplane on a broad float, which, being underpowered, had not, at that time, been successful in getting off the water.  From it also many invaluable lessons were learnt, and so, having collected and tabulated a goodly collection of data by the summer of 1911, Mr. Wakefield commissioned Messrs. A. V. Roe and Co. to build for him a biplane of the Curtiss type.  This was fitted with a single narrow float, much after the same style and shape that fitted to the Curtiss machines in America.  It, however, embodied several improvements that had resulted from the independent experiment.” 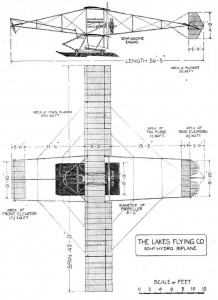 Incredibly, the Lakes Flying Company’s “Water Hen” proved to be one of the most robust seaplanes in those early days of aviation and experiments.  The plane was soon flying “aero-tourists” around the lake and proved to be far safer than most land planes of its day.  For safety, slow flying speeds were the key.  As well, to keep the passenger dry and ensure a good view, the seat was mounted above and behind the pilot.  Finally, to ensure good water steering, a coupled water rudder was fitted to the aerial rudders at the back of the plane.

“It was purposely designed to be a slow-flying machine in order that it might lift from the water at a low speed and be more comfortable for passenger carrying.  The float fitted was of a new type, much broader and was stepped.  The intended results were achieved at the first trial, and the machine has remained practically unaltered from that day to this….  During the seven odd months it has been in use over Windermere, it has made about 250 flights, and has carried over 100 different passengers.”

Despite the promise of the design, the Water Hen appears to have been a better tourist machine than manufacturing opportunity.  Most Englishmen learned at the new airfields at Brooklands, Hendon and so forth, proving their skills on land planes.  While the Lakes Flying Company opened their own school on Lake Windermere, it never commanded many students since most of England’s flying did not take place up north, but rather down near and around London and the south coast along the Thames Estuary and not, to put it bluntly, as far north as nearly the Scottish border in the northwest corner of the England countryside.

“Mr. Wakefield is characteristically modest when talking about the machine he has developed throughout these past three years. He claims that if the machine has done nothing else, it has at least proved his contention that it is better to get a ducking than to get badly smashed up. But, although he does not make a song about it, we know he has gone considerably farther than that.”

In the end, the Water Hen perhaps lacked good marketing and a good location.  Yet it is worth remembering because by all accounts, it outperformed most of its contemporaries.  As well, it did yeoman’s work in popularizing flying with common people, many of whom took vacations to the Lakes District and, while there, purchased a 15 to 20 minute on the Water Hen to cruise around the lake sightseeing, a practice that is still common today, 100 years later!

In the years that followed, the Water Hen wouldn’t be the only example of a better airplane that somehow never gained a strong enough marketing foothold to “take off” — at least in the economic and business senses.

Though the writers of Flight didn’t recognize it, the Water Hen was actually the SECOND hydro-aeroplane that the Lakes Flying Company had designed and flown.  The first, called the Lakes Water Bird, made its inaugural flight on November 25, 1911.  Sadly, just four months later, just before the start of the tourist season, a gale blew in off the Irish Sea and collapsed the hangar onto the plane, utterly destroying it.  Undaunted, the investors and owners of the Lakes Flying Company, commissioned a new hydro-aeroplane with a much improved design — this would be the famous Water Hen that would make its mark in the history of aviation by flying aero-tourists around Lake Windermere with great regularity.

What ever became of the Water Hen?  Did it ever crash?

2 thoughts on “The Water Hen”