One hundred years ago today, two members of the Royal Aero Club published a report about a trip they had made to the Americas, bringing along two crated aeroplanes.  After successful exhibition flights in New York, they packed up and proceeded to Mexico City.  Once there, they took off into the heat of the day and discovered that flying in Mexico was a new and troubling experience.  They struggled to understand the “heat eddies”, “whirlwinds” and “down trends” — what we would call thermals and downdrafts today — that tossed their small aeroplanes around.  They also flew at density altitudes that they had never before experienced, the difficulties of which would prove nearly disastrous. 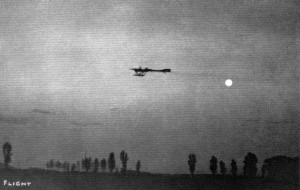 Flying by moonlight over Mexico in a 60 hp Deperdussin two-seater. Source: Flight, January 18, 1913

Mr. George M. Dyott and Capt. Patrick Hamilton had arrived in Mexico with two Deperdussin monoplanes, one a 60 hp two-seat machine and the other a single-seater with a 28 hp engine.  Dyott summed up his terrifying experiences in some detail in his report, his English manner coming through with clarity in his prose:

Taking it on the whole, I did not find flying down in Central America anywhere nearly so comfortable as flying in the North.  In all the hot countries in which I have flown, the calmest and most inspiring mornings, I soon learned were the most treacherous, and, in fact, almost dangerous.  There might not be a breath of air stirring, yet the air would be riddled with heat eddies and down trends in every direction.  Add to this a gentle wind, and you have the only condition that could be worse, as this caused whirlwinds of a local character, which would swing even a moderately fast machine 30 or 40 degrees out of its course.  Being caught in one of these whirlwinds I found the best way out was to dive the machine with motor stopped, at the same time turning head on to wind, if that were possible. 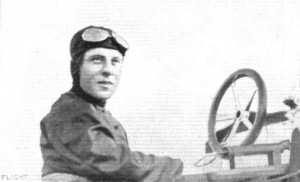 Mr. Dyott went on to describe the conditions of Mexico in the best terms he could.  With modern knowledge of weather, it seems equally depressing and fascinating to read his descriptions as they demonstrate continuous misunderstandings of the types of thermals and weather he encountered.  While today we have the benefit of 100 years of accumulated knowledge, we must also remind ourselves that these men were experiencing things which no others had experienced before.  That knowledge has been handed down to today — and Dyott, among others, was recording what they had learned for future generations.

A very curious condition of things existed in the Valley of Mexico.  The valley is circular and surrounded on all sides by high mountains.  At certain times during the day I found that I could make a complete circle one mile in diameter, having a following wind the whole way round.  Up to 1,000 ft. the air would be steady, above that impossible.

In this, he was likely experiencing the rising thermals that often hug the slopes of mountain ridges during the day.  The following wind (tail wind) was almost certainly a misinterpretation.  Holding a lower altitude amidst a continuous updraft along the valley’s edges, he would have had to point the nose slightly downward, which gave him the feeling of a continuous tail wind since the aeroplane would have flown at a higher speed.  Likewise when flying higher, he encountered ridge top turbulence — today we call this mountain wave. 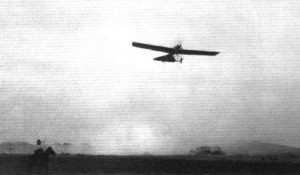 G. M. Dyott discussions of the confusing properties of the “air eddies” should be interesting to read for modern glider pilots.  In fact, he is describing excellent gliding day for long distance competition.  Yet in those days, flying machines were crude, light and less stable.  Fighting through thermal updrafts and the surrounding downdrafts was challenging as the dry landscape only heightened the effects of the near equatorial sun.

Towards 4 p.m. on a cloudless day the heat eddies became less local in character, with the result that the entire atmosphere seemed to be rising.  On the other hand a partly clouded afternoon was always bad, and the effect of passing from sunshine to shadow, or vice versa, was always accompanied by a sudden rise or fall of the machine.  Another observation I made was that, while heat eddies would rise vertically in an absolute calm, a wind would incline them over at an angle, and under these conditions, flying with the wind, the disturbances would be more noticeable than flying against it.  It seemed that the small local whirlwinds, dust devils as they were called, would originate about one of these air chimneys. 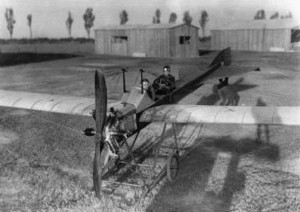 G. M. Dyott and the two-seater, 60 hp Deperdussin poses in his aeroplane for a cameraman, whose shadow (and the tower in which he stands) falls across the wing in the late afternoon sun.

To fly the small Deperdussin was a source of considerable interest.  A run would be made over the ground, tail well in the air, making no attempt to get off.  The first heat eddy encountered would lift the machine bodily off the ground like a balloon, some 30 or 40 feet.  A slight effort would be made to check the rise until the disturbance had been passed through, then the elevator would be returned to a position of gentle descent, allowing the machine to gradually lose altitude until the next air “chimney” was encountered, when the same performance would be repeated.  In this manner altitude could be gained according to the frequency of the heat eddies encountered, it being quite possible to get up to 1,000 ft. in 15 minutes. 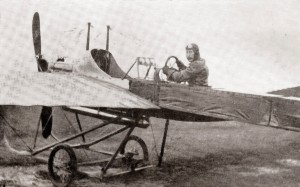 A Near-Fatal Stall and Crash

Dyott wrote also of a crash, misinterpreting the events, having observed the aeroplane flown by his friend, Capt. Hamilton.  In his mind, Hamilton had encountered a “side gust” that flipped the Deperdussin while he was struggling to climb above a line of high trees in the late afternoon.  With modern understanding, we recognized instead that he simply stalled and the plane flipped into an unrecoverable, low altitude inverted spin.

We had been invited to pay a visit to the Country Club, some 16 miles from Mexico City….  Hamilton was rather anxious to put the little machine through its paces, and he decided to make the attempt on that, while I flew over alone on the two-seater.  We set out at 2.30 p.m., the little Deperdussin climbing easily and well, and we both arrived safely.  After a game of tennis, and some tea, it began to cloud over, and it was 5 before Hamilton started back.  I rather urged him not to make the attempt, but he thought he could manage it, so off he went, disappearing over some high trees with 80 ft. or so to spare.  He thought he could not clear them, and was trying to force the machine up, when a side gust caught him, turned the monoplane completely over, and it described a vol plane on its back, Hamilton with his knees under the control bridge, still hanging on inside.  It landed, breaking everything but the wheels and Hamilton, who then dropped out unhurt — a marvellous escape.

Capt. Hamilton was lucky to have survived. 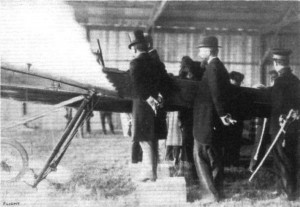 Mr. G. M. Dyott explaining to President Madero of the Mexican Republic, how the controls of his monoplane work. Shortly afterwards the President went for a trip with Mr. Dyott, remaining up for about 16 mins. Photo and Caption Source: Flight, January 18, 1913

In retrospect, Dyott and Hamilton had made a bold effort to fly in Mexico, for which they were largely unprepared.  At that time, Mexico had only barely begun its own tradition of flying.  As Englishmen, they were used to the moist air and temperate qualities of English weather — as such, Mexico had proved hazardous.  Regarding the crash, Dyott noted, “It was an expensive break, but it served to confirm absolutely what we had already supposed, and we were obliged to chalk it up to experience, our fund of which was increasing much more rapidly than our banking account.”

Perhaps the high point of the trip was taking the President of Mexico up for a flight of 16 minutes in the Deperdussin two-seater.  Such experiences were certainly worth the risks they had taken.  Mexico had been a fascinating experience all in all.  Nonetheless, I suspect they were glad to return to England and flying as they expected it to be.


Thanks for this interesting article! Our friend Mark H. Dyott, who died in 2011, was one of three sons of George M. Dyott. I am putting together a booklet of photos for Mark’s grandsons, and I would like to include these photos and the stories. Commander Dyott was indeed a colorful character and an aviation pioneer. Mark flew for several years himself, actually flying 100 years after his father first flew.