It was past midnight when the combined strength of a coalition of 34 nations launched an unrelenting air attack against Saddam Hussein’s Iraq.  The singular goal of of the war was the liberation of Kuwait, which Saddam Hussein’s forces had attacked and occupied on August 2, 1990.  In the first minutes of the campaign, a helicopter attacked an destroyed a radar station in the desert along the border with Saudi Arabia.  Immediately after came an unrelenting stream of aircraft, flying through the newly created gap in Iraq’s early warning network.  Among the many planes that night that flew into Iraq was an F/A-18 Hornet of VFA-81 “The Sunliners”, flown by LCDR Scott “Spike” Speicher, USN. 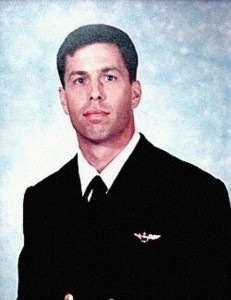 The Iraqi Air Force (IQAF) recognized the incoming assault — they had prepared as best they could, but knew too that they would be overwhelmed.  Nonetheless, they launched their best interceptors into that first night of war.  A MiG-25PDS flown by Lieutenant Zuhair Dawood of IQAF’s 84th Squadron scrambled and got airborne.  Receiving vectors from a ground controller, he was soon heading toward the ongoing stream of coalition aircraft.  As he closed on the incoming air assault, a massive electronics jamming and spoofing campaign clouded his lower quality Soviet systems.  Additionally. his radios were rendered inoperative.

Yet somehow, amidst the fog of electronic war, his radar still locked onto something out there in the night.  He couldn’t see it, but knew it had to be an enemy aircraft.  In his scope was the F/A-18 Hornet of LCDR Scott “Spike” Speicher, flying at 28,000 feet and at .92 mach (540 kts).  Approaching from head-on, Lt. Dawood fired an R-40TD and saw it streak away and disappear into the darkness.  Shortly afterward, he saw a distant fireball as the missile exploded.  Somehow, against all odds, he had shot down an aircraft that night.  He returned to his airbase and landed, unharmed.

Lt. Dawood’s successful interception remains the only air-to-air victory the IQAF scored in the skies that night and throughout the rest of the war.  It was also the first coalition aircraft lost in the war.  Other aircraft would be downed from Surface to Air Missiles (SAMs) and ground fire, but his victory remains unique.  Sadly, it would also launch an 18 year search for the American Naval pilot lost that day. 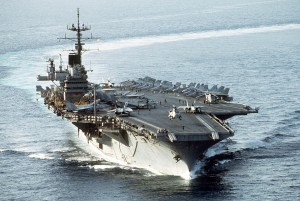 The USS Saratoga (CV-60) during Operation Desert Storm — it was from this ship that LCDR Scott Speicher launched on his mission. Photo Credit: US Navy

From Impact to Death

When the missile hit the F/A-18 Hornet flown by LCDR Scott “Spike” Speicher, according to eyewitnesses and later analysis by US intelligence, it struck cleanly against the plane’s nose.  The blast spun the plane 50 to 60 degrees to the side.  Though it didn’t kill the pilot or crumple the cockpit, it was apparent that the plane a loss.  LCDR Speicher apparently ejected into the night.  The other pilots in his flight saw the impact but didn’t see the ejection given the darkness.  Even if later some Department of Defense officials would claim that the plane was downed by a SAM, one of the other pilots would swear that it was an air-to-air missile.

The remains of the plane fell at Tulul ad al-Dulaym, Wadi Thumayl, in Iraq’s western desert — later, the site would be identified as being precisely at 33° 14′ 35.81″ N x 42° 21′ 18.14″ E.  Whether LCDR Speicher was killed during the ejection or injured is unclear (some estimates state that approximately 70 percent of combat ejections result in injuries to the ejecting pilot).  If he didn’t in the air, he certainly died soon after landing in the desert.  His body would be found some time later by a group of wandering Bedouin who would bury it in a shallow sand grave, showing respect for the dead.  All of this was unknown to the US Military, however, and LCDR Speicher was declared Missing in Action. 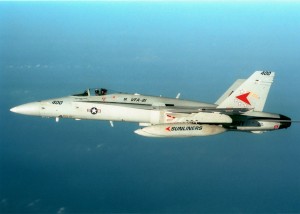 An F/A-18 “Hornet” from the “Sunliners” of Strike Fighter Squadron Eight One (VFA-81). Photo Credit: US Navy

With the end of the war, Iraq repatriated 21 coalition aircrew members.  Many of them had been beaten while in captivity.  Others had only survived based on luck when the basement prison they were in, which was a secret police headquarters, was bombed and destroyed by the coalition weeks after.  Among those repatriated, there was no word of LCDR Speicher.  As the weeks went by, it seemed more and more clear that he had been killed in the shootdown.  The US Navy had initially designated his case as Missing in Action, but after the way, on May 22, 1991, his status was changed to Killed in Action/Body Not Recovered (KIA/BNR).

What followed, however, was a convoluted and confusing trail of evidence.  First a Qatari military officer happened across the wreck in December 1993 and brought back pieces that were turned over to the US Embassy — based on serial numbers, the US Navy was able to confirm that the wreckage is LCDR Speicher’s F/A-18.  Analysts reviewing overhead reconnaissance imagery from U-2 missions during the war also located the crash site.  They evaluated the area, finding what look like markings in the desert that could have been made by LCDR Speicher after a successful ejection.  It would take almost two years for a specialist team to arrive on the site, under the auspices of the International Committee of the Red Cross.  Their analysis confirmed LCDR Speicher’s successful ejection.

With additional reports of a possible American pilot being held in captivity inside Iraq, the US Navy changed LCDR Speicher’s status from KIA/BNR, to Missing in Action and efforts continue to locate him, either alive or dead. 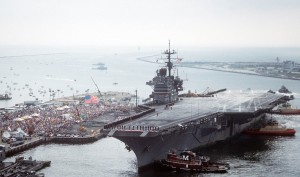 Hundreds of people wait on the shore as the aircraft carrier USS Saratoga (CV-60) is moved into place alongside the pier, when returning to Mayport following their deployment to the Persian Gulf region for Operation Desert Shield and Operation Desert Storm on March 28, 1991. Photo Credit: US Navy

With the invasion of Iraq by coalition forces in the Second Iraq War in March 2003, US forces overwhelmed Iraq’s military.  The battle lasted weeks but eventually the regime of Saddam Hussein was overthrown.  In the wake of the victory, US Military experts combed through Iraqi records and prisons looking for evidence of LCDR Speicher — however,nothing conclusive was found.  Though there were rumors that he was being held by Baathist hold-outs in the Al-Anbar Province, perhaps as a bargaining chip, as the months go by, it became more and more clear that he was likely dead, though when he died remains a mystery.

A full investigation continued unabated — involving many people across the US Government, even in unlikely locations.  New evidence emerged, but remained inconclusive.  Several Iraqis, including a former Brigadier Pilot of the IQAF, came forward willingly with what information they knew.  What mattered most to the Iraqis interviewed was to end the uncertainty for the family in America.  They offered to help as best they can — for them, as they thought of what it was like for many Iraqis who never knew what happened to their sons during the horrific campaigns of the Iran-Iraq War, they thought most of helping another grieving family, even if on the side of a former enemy from the conflict. 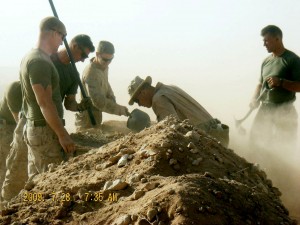 Finally, in 2009, a shallow grave was located not far from the crash site.  A special team from the Pentagon was deployed and recovered everything that could be found of LCDR Speicher’s body.  On a special flight, his remains were transported to Jacksonville, Florida, for burial.  And so, after 18 years, during which time the Pentagon never gave up in its search for LCDR Scott “Spike” Speicher, the case was finally closed.

Though the Iraqi Air Force faced overwhelming odds and were severely outclassed by the air power of the US, Europe and other coalition partners, it launched its planes anyway into the uncertainty of the first night of the war.  The Iraqi pilots knew their chances of survival were tenuous at best, yet took off anyway — many were veterans of the Iran-Iraq War where they suffered casualties as high as 50 percent.  Many were surprised to return afterward.  In the air that night, other cases emerged where IQAF fighters intercepted coalition aircraft — though none with success (except for Lt. Dawood). 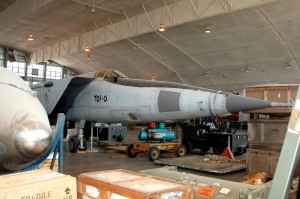 Two engagements from these first days of the conflict are particularly interesting.  In the first case, two IQAF MiG-25 interceptors were vectored onto a pair of USAF F-15 fighters.  It was a successful interception and the Iraqis fired their missiles, though without effect.  The two F-15s successfully evaded the attack and then turned to pursue.  The high speed MiG-25s quickly outdistanced the trailing F-15s, who between them fired a total of ten air-to-air missiles at the Iraqis — also without success.

In a second case, a single Iraqi MiG-25 pilot near Tikrit managed to penetrate a defensive screen of two flights of four F-15 fighter planes each (a total of eight USAF fighter aircraft!) and then fire three missiles at an EF-111A Raven aircraft that was supporting an inbound strike package.  The EF-111A Raven pilots were able to evade the missiles but had to break off their mission, which left the strike package without electronics countermeasures coverage for its mission.  As with the other pair of MiG-25s, this third Iraqi MiG also outran the F-15s and recovered successfully to their base.


RIP LCDR Speicher from the Saratoga crew and VFA-81 Sunliners (AE shop). We remember you well, Sir. You are not forgotten in our hearts.

And some engagements still under investigation.


Apart from Zuhair Dawood MiG-25PD nothing is certain.
The RAF GR.1 Tornado was crashed on different date for unknown reasons.
The B-52G was damaged by AGM-88 fired by Wild Weasel F-4G
The F-111F damaged in Tanker accident
The MiG-23 engaged target drones
The Italian Tornado shutdowned by Ground fire
The F-15C was never hit