At this time, 100 years ago, the French were continuing to press forward in pursuit of aviation firsts and new achievements in the air.  They were unique in Europe at the time, with government interest in military aviation at a high, while private investors and interests lined up with support for the many new companies and ventures with aeroplanes.  In England, aviation remained an largely amateur operation with little government interest and few investors.  The military had invested in training some pilots and the major issue of the day was whether monoplanes should be banned as unsafe, given two unfortunate accidents involving military aviators in the past months.  In Germany the government was investing in Zeppelins and other military aeroplanes.  Likewise in Italy, efforts were underway to expand the nation’s air power (having proved its worth in the Libyan conflict).  Nonetheless, it was in France where the real news of the day was happening. 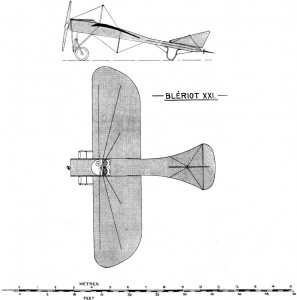 A Blériot XXI, an advanced model that followed the same plan of the Type XI, which was the famed plane that was the first to cross the English Channel. Source: Jane’s All the World’s Aircraft 1913

As reported by the Royal Aero Club’s newsletter, Flight, the French were engaging in all sorts of incredible aviation feats, ranging from government-sponsored development projects to private ventures and journeys.  Some of these were mere amusements — such as flying out to participate in the hunt or for lunch (the modern equivalent of the $100 hamburger) — yet others were deadly serious, like the government’s commitment to train large numbers of military personnel in aviation.  Indeed, the place to be 100 years ago today in aviation history was in La Belle République — the rest of Europe, including Britain, was lagging behind. 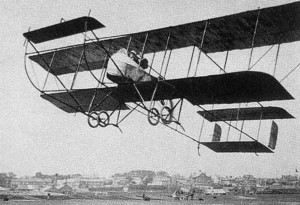 A Farman MF-7 takes off in France.

The Royal Aero Club of England contained many news items relating to their reports from the Continent.  Here is a collection of some of the best:

Flying to the Hunt.
Having an invitation to join a hunt at Baron E. de Rothschild’s castle at Ferrieres on the 23rd ult., Comte de Lareinty-Tholozan decided to fly over on his Blériot from Buc.  He left about 10.30 a.m. and was back at 5 o’clock, having covered 150 kiloms. without any incident.

A Long Flight on Bleriot.
Baron Pasquier who has been doing some fine flying at the Blériot school at Buc, on the 23rd ult., flew from Buc to Etampes, Chartres, &c., covering about 250 kiloms. in his morning excursion. 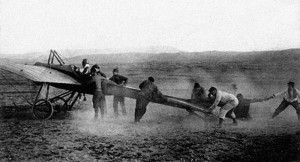 A Deperdussin with the French military in Morocco in 1913. Source: Flight

Night Flying Over Paris.
About five o’clock on Monday evening Parisians were rather surprised to see an array of lights moving in the air accompanied by the unmistakable noise of the Gnome engine.  it subsequently turned out to be Chemet on the Borel, who starting up from Issy piloted his machine over the Place de la Concorde.

Vedrines has a Stop.
Having an engagement to lecture at Boulogne on Monday evening, Vedrines started to fly there from Rheims on his Deperdussin monoplane.  He got as far as Amiens, where he had to land owing to his petrol tank leaking.  He placed his machine in one of the military sheds and completed his journey by train. 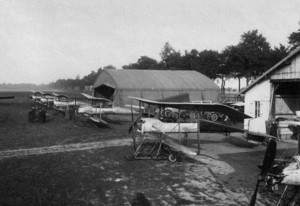 At Villacoublay in late September 1912, a collection of Breguet machines (mainly Type R) are lined up at the sheds.

A Collision at Villacoublay.
The extraordinary accident which occurred at Villacoublay on the 21st ult., in which the son of the French Naval Minister was so severely injured, once more emphasises the need for aerodrome managers to see that the rule of the air is adhered to.  A biplane piloted by Collardeau, and carrying M. Jacques Delcasse, was run into by a monoplane piloted by the Siamese officer, Nai Thip.  Both machines fell to the ground from a height of 90 ft., and were, of course, smashed, but Collardeau escaped with nothing worse than a shaking, while the Siamese was not in much worse case.  M. Delcasse, however, sustained fractures of the right arms and left collarbone, while his right knee was smashed, and there were other serious injuries.  The latest report, however, is that he is making good progress.

Farman Brothers Flying in Company.
On Monday Maurice Farman on a biplane, accompanied by Senouque and Henry Farman with a lady passenger, flew from Buc to Chartres, where they had lunch.  They returned in the afternoon, making a long detour over the country on the way.

A Farman with the French military, rolled out from the lines of hangars that typified early French aerodromes.

The news about the French Army’s advances in aviation was stunning for the British, given their own government’s generally lackluster approach to aviation.  As Flight noted aptly, the British government and people all recognized that at some point the country would have to rapidly ramp up its capabilities in military aviation, yet nobody could yet foresee quite when that might be the accomplished.  Little did the country recognize that the Great War of 1914 was but 16 months away.

More Deperdussins for French Army.
Janoir, on the 21st ult., completed the official delivery tests of a batch of eight Deperdussin monoplanes for the French Army, and afterwards made a trial flight of an hour’s duration, including a climb of 1,800 metres in 9 min., on a Deperdussin with a Clerget engine.  All these machines were fitted with Rapid Propellers.

More Aviators for French Army.
On the 16th inst., 89 officers, non-commissioned officers and men, who have been undergoing a course of theory at Versailles, will be sent to the various schools, in order to be instructed in practical work and become qualified as aeroplane pilots.

Madagascar Gives Two Machines.
Two Farman biplanes have been presented to the French Army by Madagascar.  The first was tested by Henry Farman on the 23rd ult., and the other, a Maurice Farman, was passed on Saturday, when with Fourny at the helm and a passenger, a load of 250 kilogs. was carried, and it was flying over an hour. 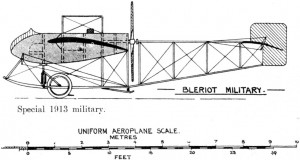 Early in 1913 a special experimental military machine was produced by Blériot with considerable secrecy. Source: Jane’s All the World’s Aircraft 1913

Ultimately, the French aviation dominance of 1913 would be seriously challenged by the Germans in the coming Great War.  Germany’s leadership in rigid airships, the famed Zeppelins, would prove a wise one, at least from a military perspective.  Many of the French manufacturers, likewise would become large firms under French government tutelage, including Nieuport, Blériot and Farman.  As for Britain, the names of the amateur and hobbyist manufacturers would evolve into serious companies over time — among them AVRO, Short, Sopwith — yet it would take time.  For the New Year 1913, the true Golden Age of aviation’s early days was in full swing.

And that’s the news from 100 years ago this week in aviation history. 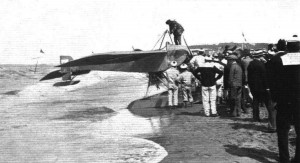 Chemet and his Borel machine immediately after arrival at the control on the beach at Deauville. Source: Flight

Another interesting story from Flight concerned a crossing by the Frenchman, Chemet, of the Adriatic with an Italian military passenger.

Flying Across the Adriatic.
A fine overseas flight was made by Geo. Chemet on a Borel hydro-aeroplane on the 21st ult., when, accompanied by Commander Ginnochio, he started up from Venice and flew over to Trieste.  After circling above the city he made a brief landing, and then immediately started on teh return journey.  He had only covered 40 kiloms., however, when a sparking-plug gave out, necessitating a descent on the water.  The plug was changed by the passenger and the journey resumed, the machine showing a speed of about 120 k.p.h. for the latter part of the trip.  The journey across the Adriatic, from Venice to Trieste, a distance of 128 kiloms., was twice made in September, 1911, by Witmer on a Blériot, but Chemet is the first to make the double journey.  The Borel machine used is the first of eight hydro-aeroplanes of this type which have been ordered by the Italian Naval authorities.


Hello, we have just established a new aviation museum in Israel. We are very interested in the Paris-Cairo air race that was passing through Palestine by the end of December 1913. We will be grateful if you have any information or photos from these flights. We especially look for Jules Vedrines photos from this flight and especially in Palestine. Thank you so much and may your magazine continue to succeed! Dan