“Young Marcel Desoutter, he is, by the way, only nineteen years of age, and withal one of the very soundest of the monoplane and biplane pilots we have in this country — had some rather unusual experiences on Saturday last at Hendon.  Going up for one of his exhibition flights, which as a rule last about twenty minutes, he rose and was above the clouds by the time he had reached an altitude of 3,000 ft.  While it was rather gusty near the ground, it was quite calm above, and by the appearance of the clouds below him he judged that the wind was simply a ground wind.  Thus, being confident he could find the aerodrome again, he stayed up above the clouds for five minutes, keeping his mind’s eye in the direction in which the aerodrome ought to lie.”

So begins the story of Marcel Desoutter’s hard lesson in aerial navigation and flight that day in England, having departed from the field at Hendon.  This was a time back in the early days of aviation when it was man (or woman) and machine with little else, often not even a compass or altimeter.  They learned aeronautics the hard way, mistake by mistake, hoping that they might survive to fly another day — and yet enjoying every moment of it, for they were, against all odds, flying! 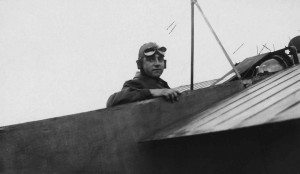 Marcel Desoutter in the cockpit of his aeroplane, which he commonly flew from Hendon.

Desoutter Lands as the Sun Sets

The story, as related in the issue of the Royal Aero Club’s newsletter, Flight, was published at this time 100 years ago this week in aviation history.  It continued to explain his gathering problem, made urgent by the late hour and the setting of the sun in England’s short winter days of January 1913:

He had no compass on board, so that he simply had to rely on his own sense of direction.  As it happened there was a high wind at the height at which he was flying, and so when he came down where he thought the aerodrome ought to be and started looking around for it he found that “someone had taken it away” as he put it.  A little later he spied a patch of water which he mistook to be the Welsh Harp waters at Hendon, and as it was getting quite dark he reckoned it best to get on dry land.  The field he selected was on the side of a fairly steep slope.  It had seemed perfectly flat till he was just on the point of touching the ground.  Luckily he landed up the slope. 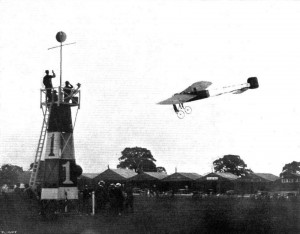 Once safely on the ground, he drew a small crowd of the “rustics”, an English elitist term for the farmers who formed the strength of England’s rural south.  Of these men, he hoped to gain assistance, even if he soon learned that it was the first time any of them had ever seen an infernal machine of the air:

From the rustics who gathered around he learned that he had descended at Cuffley, a little village in Hertfordshire.  Finding out from them his true direction back to the aerodrome, and that he was less than ten miles away, he determined to start back again and addressed one of the said rustics with a view to getting him to give his propeller a pull over.  To Desoutter’s astonishment he replied, “I ain’t no good, guvnor, I wouldn’t lay me ‘ands on the thing, not if you give me a ‘undred quid.”  As a mater of fact, all the rest of them who were there had the same holy fear of the machine, for it was the first time they had seen an aeroplane.  Seeing that it was useless to attempt to get off, Desoutter asked them if they would be good enough to help him push the machine under the shelter of a tree.  They were even too frightened to do that, and so he had to do the job by himself. 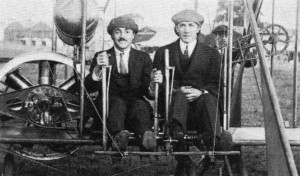 Desoutter’s Return, by Foot and by Train

Having secured the aeroplane against any overnight weather and planning a return the following day (weather permitting) to take his plane back to Hendon, Marcel Desoutter set out for the aerodrome.  He was well aware that his good friends would await his return with concern.  If the hour grew late, he knew too that would mount a search for him.  Indeed, if you were a pilot in the early days, the friends you made at the aerodrome were friends with whom you would trust your life — and often did.

Having got the machine well pegged down and covered over, he made an attempt to let the aerodrome people  know of his whereabouts, but he could find no ‘phone in the place; so he waited forty minutes for a train, and by a very roundabout route got back to the aerodrome about a quarter past seven, much to the relief of his friends there.  They had almost given him up for lost, had lighted flares and sent up rockets to guide him should he see them, and had telephoned to most places within a twenty-mile radius north of the aerodrome in an effort to determine his whereabouts.

An English bobby lends a hand, along with others, as Desoutter runs up his engine prior to an exhibition flight at Hendon. Photo Credit: Flight

So ended the story of Marcel Desoutter’s lesson of the day in flying which the editor of Flight, “Oiseau Bleu”, felt worthy enough to share given it instructive nature.  Looking back at the raw and unsophisticated tools of flight in the day and the general lack of knowledge and experience about the basics of weather, flight above clouds and pilots techniques, it is amazing that any of them survived.  Yet they did and the lessons they learned all those years ago today form the foundation of every pilot’s training and skills today in these more modern times.

The early aviators flew when we would not and learned the hardest of lessons, often with tragic results.  Yet in doing so, they cleared the way for generations of pilots that followed.  Looking back, would any of us do what they did again?  I suspect we would, but thank God we do not have to. 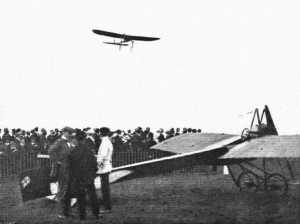 Marcel Desoutter was one of the youngest pilots in the early history of British aviation.  He learned to fly at 17 years old and passed all of his flight tests.  He could not receive his certificate until he turned 18, however, so he was awarded Royal Aero Club Certificate No. 186 on February 27, 1912, nearly a year later!  Training at the Blériot Company at their Hendon, he became an early master on that type of machine, though he flew most other aeroplanes on the field as well.  By the time 1913 arrived, he was considered highly experienced and was serving as a Blériot test pilot, flying demonstration flights and even instructing others. 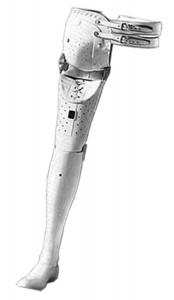 One of the first Desoutter prosthethic legs, fitted with belts to attach to the body. Fittingly, Desoutter’s company manufactured the legs at Hendon.

Sadly, during an Easter aviation meet, on March 23, 1913, he suffered a terrible accident.  Losing control of his Blériot, he nosed over and crashed.  His leg was smashed and ultimately amputated.  Fitted with a heavy wooden leg, he could not fly properly — his brother than developed a duralumin prosthetic leg, which allowed him to fly again due to its light weight.  Together, the two brothers then went into business designing and developing improved prosthetic legs — a business that was successful and helped countless returning, war-wounded veterans after World War I.  Today, the firm he helped found is still around and produces tools for orthopedic surgery — known as de Soutter Medical, it can be found on the web at:  http://www.de-soutter.com/

Later, Marcel Desoutter would help found a new commercial airport for London (and others), which he managed until his death in 1952, at the age of 58.  That airport is a well-known name around London these days — known as Gatwick, it serves as one of London’s two largest international airfields.

What famous British aviator of the 1930s and 1940s was fitted with Desoutter prosthetic limbs?


Was it Douglas Bader?