On January 4, 1989 — today in aviation history — based on an intelligence advisory, two Grumman F-14A Tomcats of VF-32 “The Swordsmen” launched from the deck of the aircraft carrier USS John F. Kennedy (CVG-67) over the waters of the central Mediterranean.  At the time, US Navy exercises were underway in the area.  With the impending change in the American presidency, Libya’s rogue leader, Muammar Qaddafi, sought to bloody Ronald Reagan’s nose.  Based on the intelligence, the American Navy put its two most experienced and highest trained pilots from VF-32 into the cockpits.  After launch, they turned south into the Gulf of Sirte, a territory that Libya claims and that is not recognized by the United States nor Europe. 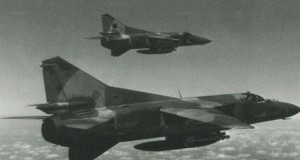 As predicted by the intelligence advisory, the Libyan Air Force launched MiG-23 Flogger jet fighters from al-Bumbah AB, near Tobruq, and proceeded north.  What followed was a classic 1980s style jet on jet fighter engagement that pitted the technically superior US Navy pilots, who were also more experienced and skilled, against lower quality, poorly trained Libyan fighter pilots who were almost certainly expecting a one-way trip.

Despite the public posture and positive media coverage at the time, the engagement showed that even the best trained flight crews can make mistakes — and still win.  The combat could well have “gone the other way”, except for the persistence of the American pilots and radar intercept officers (RIOs) in the two-place F-14A Tomcats and their mastery and control over the aerial situation at all phases of the engagement.  Put simply, the Naval pilots made mistakes but recovered quickly and never let the aerial combat situation break out of their control.

Throughout the engagement, even as the Libyans were turning and twisting, the American pilots made the best of each move and counter-move.  Far from a one-sided engagement, the combat illustrated very good command and control on the part of the Libyans, who nonetheless lost both aircraft.  In fact, Libya’s MiGs and their pilots were simply inferior in all respects.  If the US Navy made small mistakes, the Libyans were soon making huge ones. 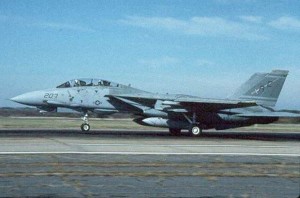 One of the two F-14A Tomcats that engaged the Libyan MiG-23s over the Gulf of Sidra. Source: DoD

The Transcript and Analysis

Before the final phases of the engagement, the US Navy pilots used their long range radars and locked onto the Libyan MiG-23s.  In past brushes with the Libyans, they would usually retire to the south, taking the warning at face value.  This time, however, despite repeated radar lock-ups, the Libyans bored straight in.

The fight was on — and the radio transcript reveals the stress of the situation. 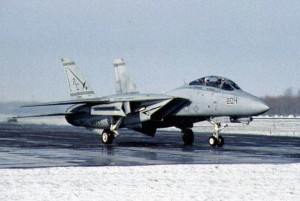 The second of the two F-14A Tomcats that engaged the Libyan MiG-23s over the Gulf of Sidra. Source: DoD

A Closing Engagement with Positioning

At this point in the conflict, the aircraft are still far apart, but closely rapidly.  The F-14A Tomcats elect to descend so as to ensure that their radar gets a clear lock-on without ground clutter that might foul-up the radar picture of the engagement.

At this point, the US Navy pilots have repeatedly attempted to turn and maneuver so as to position themselves favorably against the incoming threat.  Each time, however, the Libyan pilots receive GCI (Ground Control Intercept) guidance to adjust course so as to ensure that the F-14s do not gain any advantage.  With each turn (or “jink” in the parlance of US Navy fighter pilots), the Libyans cancel out the American maneuver and press in, ensuring a head-on engagement, which is their best (if slim) hope of effectively engaging the Americans. 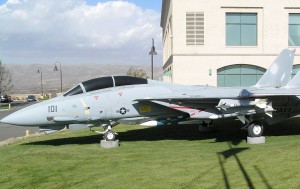 An F-14A Tomcat at the Reagan Library in California, on display as testimony to a US President who stood strong and refused to give in to the demands of dictators worldwide. Photo Credit: Lisa Barnum

Final Engagement and First Shoot Down

The Libyans have now closed to within a reasonable range.  For the US Navy pilots, this means that they have to engage and shoot down the planes.  The Libyans are positioned nearly 11,000 feet higher than the American planes, which elected to go low to improve their radar performance, as earlier described.  The Libyan planes, however, have vastly inferior radar systems and probably could not get a good radar picture of the threat they were facing.  They went by GCI guidance alone — at no time is the Radar Warning Receiver (RWR) heard in the audio files from the F-14s, thus the Libyans never locked out for a firing solution.  The Americans proceed to engage with the intent to destroy the two Libyan planes.

The pilot of Gypsy 207, Joseph B. Connelly, is surprised to see one of his missiles launch, as the attack wasn’t properly coordinated by his RIO, Steven P. Collins.  Seconds later, the AIM-7M Sparrow missile fails to track properly.  RIO Collins had improperly set a switch on the missile prior to launch, which resulted in its failure (this was a recurring problem with AIM-7M Sparrow missile launches from F-14A Tomcats at the time. 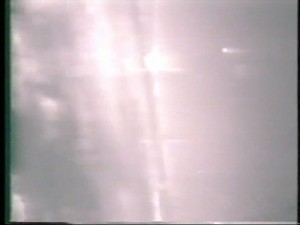 The lead F-14 has just destroyed the last MiG-23 with an AIM-9 Sidewinder. This screenshot is taken from the “F-14 – Libyan MiG-23 Engagement” during the Secons Gulf of Sidra incident. Photo Credit: US Navy

The RIO in Gypsy 204, Leo F. Enright, spotted the two Libyan MiG-23s as they were now just six miles dead ahead.  The Libyans were closing quickly and had negated the F-14’s long range systems advantage, despite all.  At this point, the engagement threatened to devolve into an old-school gunfighter-style dogfight.  The Libyans had played their cards well and the US Navy’s lead plane, Gypsy 207, had made two critical firing mistakes with its AIM-7M Sparrow radar-guided missiles.

At this point, Gypsy 204’s pilot, Hermon C. “Munster” Cook III, has the Libyan MiG-23 lined up perfectly in his HUD.  Everything is right on and he is within 1.5 miles of the MiG, directly behind it.  Incredibly, the pilots hears no missile tone from the AIM-9M Sidewinder missile.  Moments later, Cook realizes that he simply has the volume turned down to the stops.  Turning up the knob, he is greeted by the perfect growling tone of the missile, which is tracking the target perfectly.

As for the Libyans, they seem unable to keep up with the rapidly changing air combat.  Gypsy 204 did an early break and then reversed to come in behind the Libyan MiG, pulling a continuous 5Gs in the maneuver.  Once too close for radar-based weapons-systems, Gypsy 204’s pilot selected heat-seeking missiles, which are fired from up front and the RIO, Leo F. Enright, transitioned to a different role in the fight, keeping his eyes open and tracking the overall combat picture and planning for the egress afterward, thus freeing up the pilot to concentrate on the attack.

The Libyan MiG pilot, who should have pulled out sharply into a tightly turning dogfight, is tentative and does not maneuver effectively.  It would appear that while the GCI instructions had been perfect and had countered the F-14s in their earlier positioning, now that the combat is engaged, the Libyans lack the individual pilot initiative to fight “head-to-head” in a turning fight. 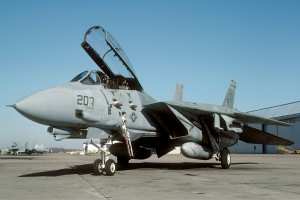 For a few brief seconds, the two F-14s track the two parachutes of the Libyans as they descended toward the water.  They also watch for the impact of the two MiG-23s into the water.  Then they turn and descend, accelerating away and to the north.  As earlier briefed, the Libyans had another two MiG-23s airborne, even if they were 50 km further south, and this was a threat that was on the minds of the pilots and RIOs.  Though they would have likely been able to engage and shoot down those as well, they didn’t know where the other aircraft were.

Their assumption was that the other two MiGs were far enough away or had turned off the track since the early warning radar aircraft, the E-2C Hawkeye “Closeout” did not provide reporting during the engagement.  In fact, “Closeout” called the two other aircraft earlier but the call was misinterpreted by the two Tomcat crews.

Gypsy 202 — with a Libyan MiG-23 painted on the nose indicating the kill scored in 1989. Photo Credit: US Navy

The engagement had its flaws, no doubt, but this is not uncommon in air combat when the enemy is “real” and can shoot back.  The training of the US Navy pilots was vastly superior to that of the Libyans, who relied on by the book GCI tactics throughout the engagement.  Once in close-quarters, even when mistakes hobbled the US attacks, the flight crews reacted quickly, adjusted and continued to prosecute the combat.  At no point in the engagement did the Libyans get an effective firing solution or move into a shooting position — the US Navy pilots and RIOs simply never gave them a chance.

Incredibly, though both Libyan pilots apparently survived being shot down, the Libyans did not send out any ships or helicopters on a SAR (search and rescue mission).  Perhaps Qaddafi was angry that they had not succeeded shooting down the Americans and their punishment was abandonment to death on the high seas.  Perhaps the Libyans simply didn’t plan on taking losses (though that seems far-fetched).  Perhaps the pilots were just assumed killed in the engagement.

It is likely that nobody will ever know.

Click HERE to listen to the original US Navy audio track of the engagement.

As the F-14A Tomcats have been retired from the US Navy, what is the final disposition of the two aircraft involved in the shoot down that day, January 4, 1989.


I don’t understand how the RIO can arm and fire missiles? I thought the pilot did that? Could someone elaborate a little on that? Thanks very much.


The F-14’s cockpit layout is designed to promote cooperation and divide the workload between the pilot and the RIO. The RIO’s job is to handle radar and communications-related work, especially the tracking of target with radar and employment of Sparrow and Phoenix missiles, which relied on radar for guidance. The pilot’s job is to handle piloting and navigation, as well as close range dogfights with Sidewinder and guns. While the pilot could fire the Sparrow and the Phoenix from the front cockpit, they would still rely on the RIO to lock the radar and ensure effective employment of those weapon systems. The master arm switch is probably located on both cockpits.


I believe that much of the “who said what” is incorrect, and also, I believe that your crew pairings are wrong. It should be Connelly/Enright, Cook/Collins, if memory serves. However, the transcript seems correct and so it doesn’t make too much difference.

The Sparrow missile kill (the first) was from Cook/Collins, while the Aim 9 kill from Connelly/Enright.

Thanks for the memories.


1. Does anyone know the final disposition of these aircraft?
2. Joseph Volpe: did you confirm the BU numbers for each of these?
3. Was one of them AC207 or is that an error?
Thanks!


Mr. B, you are correct about the roles each person has. The Master Arm switch is only in the front seat.