The Miracle of Saint Nazaire

On January 3, 1943, exactly 70 years ago today in aviation history, the USAAF launched a bombing raid on the staging yard for U-Boat torpedoes located at the docks of St. Nazaire, France.  Among the planes lost that day was the B-17F Flying Fortress “Snap! Crackle! Pop!” (lettered, “PU-O”), so named because its nose art depicted the Kellogg company’s famous breakfast cereal mascots riding atop a 500 lb bomb.  Seven of its ten man crew would be killed.  Of the three survivors, two would parachute into the water offshore St. Nazaire and the third would go down in history.  Forever after, the ball turret gunner, S/Sgt. Alan Magee, would be known as the “Miracle of Saint Nazaire”, having been thrown from the plane unconscious and falling without a parachute from more than 20,000 feet to impact the ground — and somehow, he survived. 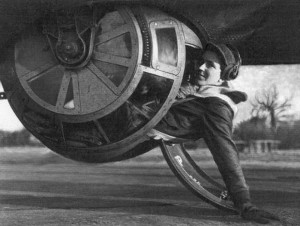 S/Sgt. Alan E. Magee poses for the camera, halfway into the tight confines of the ball turret of a B-17 Flying Fortress.

For Nazi Germany, the docks were critical to their war effort.  The harbor had excellent ship repair facilities and heavily reinforced U-Boat pens from which the deadly German submarines would launch to target Allied shipping.  Missions against St. Nazaire were not long ones, but they were deadly.  The city was strongly defended — aviators dubbed it “Flak City” for the extensive AAA guns that ringed the port area and surroundings.

The stranglehold of the German U-Boats on England was slowly being broken through 1942.  Essential to the war effort was stopping the U-Boats — unless that could be accomplished, the build up of men, materiel and supplies in England for an invasion of France would remain difficult.  Thus, with the New Year of 2013, the USAAF was tasked with bombing the city in force.  Naturally, the Luftwaffe’s flak gunners and fighter interceptors turned out in full force to counter the American effort.

The 1st Provisional Bombardment Combat Wing took on the mission, led personally by its commander, Brig. Gen. Haywood S. Hansell.  Among the units tasked for that day’s raid were the 303rd Bomb Group (Heavy) and the 306th Bomb Group (Heavy).  The 360th Bomb Squadron, one of the squadrons that made up the 303rd, launched in full force against St. Nazaire.  By late war standards, the raid was small, numbering just 85 bombers with fighter escort, yet this was still early in the American bomber war over Europe. 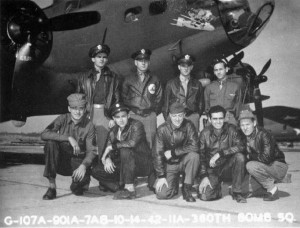 The “Snap! Crackle! Pop!” is Shot Down

Flying with the 303rd Bomb Group’s 360th Bomb Squadron, the B-17 “Snap! Crackle! Pop!” held to its position in the large formation of bombers as the fleet of bombers made their bomb run against St. Nazaire.  As expected, flak was devastating and thick.  The Luftwaffe flak units were right on target and dozens of planes were hit.

Aboard the “Snap! Crackle! Pop!”, the pilot, Capt. Arthur I. Adams, and copilot, 2nd Lt. Gene A. Witterstetter held the plane steady in their position among the six aircraft in the left combat box, on the rightmost front position in the V.  The bombardier, 2nd Lt. Michael L. Libonati, Jr., was preparing for the bomb run.  Others in the crew stood by at their stations as the plane was rocked by numerous near hits from flak.  Ahead, approximately two to three dozen Fw 190 and Me 109 fighters were forming up for a head-on attack.  Less than three minutes from the target, suddenly, the “Snap! Crackle! Pop!” took a flak hit on its belly.  The ball turret took the hit squarely, severely injuring S/Sgt. Alan Magee as he sat curled into the tiny space that was afforded the bomber’s bottom gunner.  The ball turret was so small that gunners couldn’t wear a parachute inside (it was stored above in the fuselage). 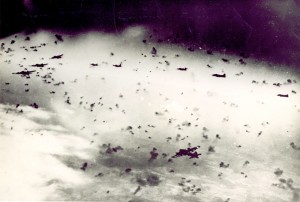 S/Sgt. Magee opened the turret hatch and crawled out into the fuselage.  It was clear to him that the crew would have to bail out.  S/Sgt. Magee grabbed his parachute but found that the flak had shredded it.  Bleeding, he struggled forward toward the radio compartment, just a few feet forward of the ball turret, located behind the bomb bay.  His intent was to meet with the radio operator, T/Sgt. Alfred M. Union, and strap themselves together to bail out.  As he stood there, another flak shell tore into the plane ripping a hole in the side of the fuselage not far from where S/Sgt. Magee was standing.

A Second Devastating Hit and the Fighter Attack

Simultaneously, S/Sgt. Magee could see from the top of the radio operator’s station that an Fw 190A-4 fighter (probably from 7/JG2) firing as it passed the plane — its cannon and machine gun rounds tore off part of the bomber’s right wing.  The plane went into a spin, throwing S/Sgt. Magee off his feet.  Already at the edge of consciousness from lack of oxygen, he was further injured by the blast and fell unconscious.  As the bomber rolled over and spun downward toward a fiery crash, his body was tossed around the fuselage before being ejected through the hole made by the second flak hit. 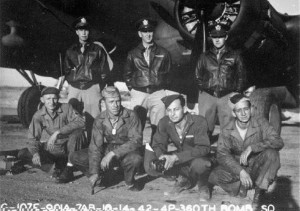 Up front, the flight engineer, T/Sgt. Lewis C. Hart, the pilots and the bombardier did not make it out.  Nor did the radio operator, nor the two waist gunners, S/Sgt. Edward W. Durant and Sgt. Marvin L. Milam.  The wreckage of the “Snap! Crackle! Pop!” came down in La Baule les Pins, only six miles west of St. Nazaire.  Just two parachutes were sighted by other bombers in the squadron as they pressed onward to bomb the U-Boat torpedo yard.

The Fall and Landing

Somehow, during the free fall earthward, S/Sgt. Magee regained consciousness.  He knew that he wouldn’t likely survive such a fall, lacking a parachute.  Thus, as he fell through the freezing winter air his last thoughts were a plea to God.  He would later recall he asked simply, “I don’t wish to die because I know nothing of life.”

Then his body fell into the glass roof of St. Nazaire’s railway station.  He crashed through as the glass shattered beneath him from the violence of the impact.  Somehow, against all odds, perhaps due to the yield of the glass breaking, maybe from the angle of impact against the slope of the roof line combined with the height from the roof glass to the steel girders that arched above the railway tracks, it all added up perfectly.  Unconscious and badly hurt, his arm was nearly severed, his eye and nose partly crushed, his teeth, leg, knee and ankle injured.  His lungs and other internal organs were also partly crushed.  Yet S/Sgt. Magee was found still alive by the German guards, hanging above the station, his body draped over the steel girders that held up the roof. 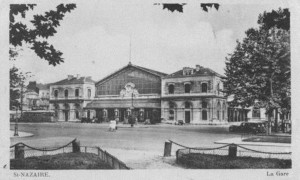 A German military doctor was summoned to deliver medical care as the soldiers brought down the body.  When S/Sgt. Magee regained consciousness, the doctor told him, “We are enemies, but I am first a doctor and I will do my best to save your arm.”  Besides saving S/Sgt. Magee’s arm, he also bandaged and properly cared for his other wounds, which included 28 individual shrapnel wounds and internal injuries.

S/Sgt. Magee recovered nearly fully and spent the rest of the war in a POW camp.  All of the other men mentioned above in this story were killed.  Only two others from the crew of the “Snap! Crackle! Pop!” survived — the navigator, 2nd Lt. Glen M. Herrington, who lost a leg, and the tail gunner, S/Sgt. James I. Gordon, who survived without injury.  S/Sgt. Magee survived the two hits by flak, the attack by the fighter plane and the fall from over four miles high — and thus, became known as the “Miracle of St. Nazaire”.

In later years, S/Sgt. Magee would sum up his tale with the simple statement, “I don’t know how I got there, but here I am, thanks to God.”  As for the doctor who saved S/Sgt. Magee’s arm and patched up his numerous wounds, his name has never been uncovered; nobody knows if he survived the war or not.

The raid on St. Nazaire on January 3, 1943, was the sixth USAAF bombing mission flown against the U-Boat pens and support facilities there.  It was the fourth that the 360th Bomb Squadron had flown against the city.  The mission that day was only moderately successful.  Of the 85 bombers that set out, 76 bombed the target.  Seven were shot down (in each bomber there were ten men) and of the rest, 47 were damaged, some severely.  The raid, in raw terms, was a terrible experience.  Typically, in 1943, the USAAF would lose approximately 5 percent of its bombers on a mission.  In the raid on St. Nazaire, that increased to more than 8 percent losses with more than 55 percent damaged.  For the 360th BS, 17 aircraft and crews were dispatched, three aborted due to problems early on,

The losses of January 3, 1943, didn’t stop the USAAF, however — on January 14, just a week and a half later, following three days of night leaflet drops by RAF Bomber Command over the city warning civilians to evacuate, the USAAF returned with incendiary bombs and burnt most of the city to the ground.  Almost all of the French had left and there were few casualties as a result.  Afterward, the U-Boat pens at St. Nazaire would be targeted continuously until August 1944, when the U-Boat fleet was evacuated following D-Day.  As for the city, it would remain largely unpopulated for the rest of the war, only to be rebuilt post-war by the French.  Amazingly, the city was never liberated by Allied troops during the war — it remained in Nazi hands until the end of the war in May 1945, having been bypassed by the Allies, who instead pressed onward toward Berlin.

Despite the incredibly low chances of survival, a number of others have survived falls from high altitude without a parachute.  Discounting the disputed case of the Serbian flight attendant, who fell from the highest altitude and survived and from what were the circumstances?


A RAF Lancaster crew member jumped out without a parachute when he discovered that all chutes were burning. His landing was softened by pine trees and snow.


I recall reading this story about the Lancaster Tail gunner’s jump, I think that the title was ‘I fell 20,000 feet and lived’ (??) many years ago in the ‘Reader’s Digest’ magazine. I was astonished at the story of his survival. I have had from that day forward the utmost respect for RAF Bomber command aircrew who flew at night. My uncle was killed aboard a B-24D Liberator in 1942 in the Pacific theater of war.


A local sports writer was a tail gunner in a Lancaster that had to return with engine trouble. Unfortunately it blew up before landing, killing the crew except the tail gunner, who was blown clear in his turret, and survived the fall. His name was Jack Cannon. He has since passed on.


On June 21st, 1963 Marine 1st LT Cliff Judkins fell 15,000 feet into the water and lived. His F-8 caught on fire and his ejection seat wouldn’t fire. He ended up bailing out, but his parachute tangled around itself. He survived but not without severe injury: “My left ankle was broken in five places. My right ankle was broken in three places. A tendon in my left foot was cut. My right pelvis was fractured. My number 7 vertebra was fractured. My left lung had partially collapsed. There were many cuts and bruises all over my face and body, and, my intestines and kidneys had been shaken into complete inactivity.”

You can find the story at the link below:
http://www.veteranstoday.com/2011/05/09/survival-f-8-crusader-pilot-falls-15000-with-failed-chute-and-lives/