On February 24, 1996, 17 years ago today in aviation history, a routine search and rescue mission took off from Opa Locka Airport in South Florida to search the waters north of Cuba for rafters trying to escape to freedom in the USA.  Three unarmed, civilian Cessna 337 Skymaster aircraft from the humanitarian non-profit group Brothers to the Rescue headed south.  Within minutes of crossing the 24th Parallel, and well outside Cuban airspace, they were greeted with an unexpected sight — a pair of MiG jet fighters from the Cuban Air Force.  While the group had been intercepted before — about ten times in the six years it had flown regular search and rescue missions — this time the encounter was different.  One of the MiGs, a two-seat MiG-29UB, lined up on the first plane and shot it down with a missile.  Minutes later, the same MiG-29UB lined up on the second aircraft and shot it down as well.

The three Cessnas that flew that day were veterans of literally hundreds of such missions each.  Each plane had been involved in countless rescues, resulting in literally thousands of lives saved.  The first Skymaster, N2456S, a white and blue plane, was flown by Carlos “Seagull Charlie” Costa, the group’s operations directions, with a former rafter, Pablo Morales, as his observer.  The second aircraft, a white and light blue Cessna 337 Skymaster, N5485S, was flown by Mario “Seagull Mike” de la Pena, with Armando Alejandre, Jr., a Vietnam veteran on his first mission with the group, as his observer.  The third aircraft, a light grey-blue and yellow Cessna 337 Skymaster, N2506, was flown by the organization’s leader, Jose “Seagull One” Basulto, with Arnaldo Iglesias as his copilot and two observers, the husband and wife team of Andres and Sylvia Iriondo.

The interception was very unexpected and ill-executed, but nonetheless, it was effective.  The Cuban Air Force showed shockingly poor discipline and skills in undertaking the interception.  Despite the poor execution by the Cubans, the outcome of a MiG-29 vs. an unarmed  Cessna was truly not in question.  The transcript of the interception, however, speaks for itself, demonstrating that the Cuban pilots were thrilled to shoot down unarmed civilian planes, botched the attacks (letting one plane get away), and had difficulty keeping their situational awareness throughout the engagement, resulting in long delays in moving from one target to the next.

Here are a few outtakes from the radio transcript of the engagement — starting with when the pair of MiGs excitedly began screaming that they had spotted the first plane (a MiG-23 accompanied the MiG-29 in the engagement) — these have been translated into English for ease of review:

The Cuban Ground Control Intercept (GCI) officer gives them authorization to attack then, even if the planes are near a cruise ship in international waters (the Majesty of the Seas, which would serve as witness to the events):

The pilot of the MiG-29 then launched a ten foot long, Soviet-built R-73 air-to-air missile at the Cessna.  It was the equivalent of going duck hunting with a bazooka.

The missile tracked true and struck the Cessna from behind, annihilating it in the midair — the time was 3:22 pm.

The last line from the MiG-29 made clear that the pilots knew exactly what airplane they had shot down and knew the political ramifications that inherently came with any mission that rescued those escaping Cuba — each successful rescue served as a reminder that things were really that bad in Cuba and they knew that Fidel Castro had had enough.

As it was, the two men on board the first Cessna (Carlos Costa and Pablo Morales) never saw the missile that killed them.  The explosion was witnessed by the passengers on the cruise ship, some of whom filmed the immediate aftermath thus inadvertently documenting that the planes were in international airspace since the cruise ship was in international waters at the time.  Their films appeared on the CNN that evening.

The Cuban MiGs then turned their attention to the next Cessna.  However, they had lost track of the situation and couldn’t find it in the skies.  In the meantime, the four people on board Jose Basulto’s Cessna had spotted one of the MiGs as it crossed their path directly ahead — his Cessna remained unseen by the Cubans.  Basulto called out on the radio with a report about the MiG but only one plane responded — little did they know at the time that the other was already shot down.

The MiGs were directed to the second aircraft, which was in the process of descending to look at a small fishing boat that happened to be there, 27 miles off the coast of Cuba.

Even then, as the MiG was still searching, Mario de la Pena, the pilot of the second Cessna Skymaster, spotted the MiG as it flew overhead.  He called it out on the radio:

Seagull Mike: “Seagull One, there’s a MiG in the air, bogie in the air, where are you?”
Seagull One: “The bogies are north of us at this time; they dropped a flare apparently to take reference from.”

Basulto had misidentified the shoot down of the first Skymaster as a “flare”.  The MiG-29 pilot then located both of the Cessnas and reported in:

After orbiting a few times and exchanging some confusing radio transmissions with the GCI officer, the MiG-29 called for authorization:

At this juncture, the MiG-23 pilot was hoping that if the MiG-29 pilot couldn’t destroy the plane, he would be given a chance — but it was not to be.  However, immediately afterward a new voice was heard on the radio:

Other Cuban pilots who later defected from Cuba identified the code “020” as the call sign of the head of the Cuban Air Force, who obviously wasn’t in the GCI center by coincidence at the time.  That simple fact, though circumstantial, demonstrates the Cuban military’s planned intent to attack no matter what the Cessnas did that day.

The time was 3:28 pm — it had taken six long minutes for the MiGs to locate and shoot down the second plane.  Once victorious, thanks in large part to the effectiveness of Soviet technology, they were celebrating by calling out revolutionary slogans over the radio.

Meanwhile, Jose Basulto turned north and simply headed back toward Florida, expecting at any moment that a missile would kill him and his crew as well.  As he would later say, “I had the impression that the next second, I would be gone.”  As it was, the MiG-29 and MiG-23 couldn’t locate his plane, having once again lost situational awareness while celebrating the second plane that they had shot down.  Running low on fuel, they returned to Cuba.  The Cuban GCI officers, however, recognized that the third plane was getting away and they scrambled another pair of MiG-23s to chase it north. 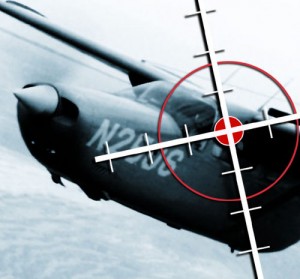 As Jose Basulto flew northward, he was relieved to cross the 24th Parallel, the US Air Defense Identification Zone (ADIZ).  Once across the ADIZ, he felt that it was unlikely that the Cubans would pursue him further.  He called Miami Center and declared an emergency.  Little did he know, however, the two MiG-23s had pursued him after all.  With audacity, they simply crossed the ADIZ and, in doing so, risked interception from the USAF’s ready fighter planes that were sitting at the end of the runway at Homestead AFB south of Miami.

In fact, the MiG-23s pursued Basulto’s Cessna all the way to up to a point adjacent to Key West, Florida!  Somehow, they were not intercepted, however and later, NORAD would claim that there was a communications error.  Instead of scrambling the ready jets, NORAD had ordered them to taxi back to their hangars and shut down, even as the USAF squadron commander was on the phone, banging his fist and begging for authorization to launch, having received intelligence about the Cuban attack on American civilian planes.  It was an incredible situation and his squadron was never authorized to launch.

Nonetheless, the second pair of MiG-23s seemed unable to fully identify the last Cessna and verify its identity.  Orbiting overhead, they continuously overshot the target, turned too tightly to come back around.  When asked by GCI to verify the registration number (a difficult matter when passing overhead a plane that was flying at maybe 150 kts while you’re doing something like 500 kts), they couldn’t read it.  On board Basulto’s plane, they never saw the aerial ballet going on above as the MiGs circled back again and again.  The Skymaster has a high wing, which blocks the view upward.  Finally, the MiGs were ordered back — the risk was too great.  In any case, another few minutes and they would have been flying over the Everglades.

In the months that followed the shoot down, confusion reigned within the group and among the press as to how such a thing could happen.  While the Cubans claimed that the group had trespassed across their claimed 12 mile limit, international law was clear on the matter — that wouldn’t have mattered anyway.  Put simply, even if they had (and they did not), there is no justification for military planes to shoot down civilian aircraft in any circumstances, even if they were to have flown over Fidel Castro’s country ranch.  As the Organization of American States later proclaimed, the Cubans had committed “cold-blooded murder”.  The United Nations too weighed in on the matter, claiming it was a criminal event by the Cuban Air Force.

Predictably, Fidel Castro claimed full justification because the group had become a political challenge, albeit a small one.  Indeed, Brothers to the Rescue had long advocated non-violent resistance as the best path to political change within Cuba, taking their inspiration from Martin Luther King.  That approach had been picked up by a number of Cuban domestic opposition organizations who had voiced support for their efforts.  Those who ascribe to the politics of realism would ultimately consider the engagement sadly predictable.  It was a criminal use of military force against unarmed search and rescue planes on a humanitarian mission, to be sure, but it was an event that could be seen in the frame of reference of a dictator like Fidel Castro, whose skewed world view, record of human rights abuses and ongoing rogue status make such actions the sad norm.

In the end, four men lost their lives in the air — afterward, the group scaled back its search and rescue activities.  Nobody will ever know just how many rafters died as a result, those who would have been saved.  Even today, 17 years later, Cubans still make the journey, hoping to row 90 miles to freedom.

What were the names of the two Cuban MiG-29UB pilots that shot down the two civilian aircraft?

The book, BETRAYAL: Clinton, Castro & the Cuban Five, tells the full story of the shoot down in finely researched detail.

Note:  There is a lot more to this story than what appears above and, as a result, the above book spent more than two months within the top 5 bestsellers in the international diplomacy category for book sales.

2 thoughts on “Shoot Down!”