The First Volunteer for China

The year was 1932 and Japan, at the time a country whose Imperialist government was focused on establishing military dominance of Asia, had brutally attacked China.  This was the so-called January 28 Incident, in which the Japanese military had begun indiscriminate attacks on the weaker Chinese.  With well-trained, sophisticated and effectively equipped air attacks, the Japanese  began to bomb Shanghai with their Naval air power, attacking across the entire city, including upon civilians.  With no air force of its own, the Chinese were defenseless in the face of the attacking planes.

Yet China did not stand alone against the aggression of the Imperialist Japanese — the United States of America, despite its position then as an isolationist nation with a deeply rooted non-interventionalism, quietly came to China’s aid.  Providing assistance was seen as a moral imperative.  Thus, the US Government “encouraged” the Boeing Company to provide its latest fighters to China.  The first biplane fighter arrived as a demonstrator along with an American pilot, Robert Short, an Army Reservist and pilot who was assigned to work for Boeing’s Asian representative, L.E. Gale. 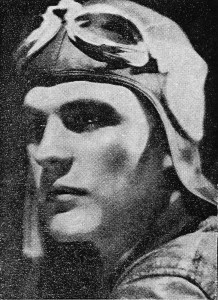 When Robert Short arrived in Nanjing, China, on February 19, 1932, he immediately heard tales of Japanese attacks on the Chinese civilian populations.  While there officially to demonstrate the little fighter biplane, a Boeing 218 P-12 prototype, to the Chinese, he nonetheless instantly recognized a moral duty to intervene.  He recognized too that there was no better way to demonstrate the new Boeing biplane than to take it into combat — the two interests were aligned.  Further, Short trusted in his skills as a combat pilot and even more so in the quality and excellence of the Boeing fighter.

That very day, three Japanese fighters returned to again attack Nanxiangzhen.  Despite that he was alone, Robert Short took off in his plane, which bore simple markings — an X atop the right wing close to the center, and a brown fuselage with yellow tail and landing gear.  Short bounced the Japanese flyers.  With complete surprise on his side, Short shot one down, killing its pilot, Lt. Kidokoro, IJN.  He landed to the welcome of an astonished Chinese observer group, who were stunned that the American had taken personal action on behalf of the Chinese people.  Not only had he shot one of the Japanese planes down but he had disrupted the attack, sending the other two planes into retreat. 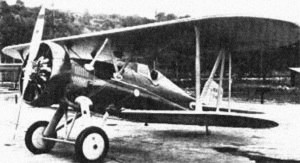 Robert Short’s Boeing biplane fighter; delivered as a demonstrator for Chinese review with the quiet support of the US Government.

The following two days, Robert Short waited for another opportunity, but none came.  Then, on February 22 — today in aviation history — the Japanese returned in force to bomb Suzhou Station.  Coincidentally, a refugee train had just arrived at the station.  Coming in quickly, there were six Japanese aircraft at low altitude — three bombers and three fighters to cover the attack.  This time, they knew that there might be aerial defenders and were ready for the attack by the unidentified plane.  The odds were fiercely weighed against him, yet to Robert Short, the humanitarian call was clarion clear — the refugees were unloading from the train even as the Japanese planes flew in.  Fearlessly, Robert Short rose to the battle, alone against the attack.

This time, the Japanese spotted him immediately and the fighters peeled off to defend the bombers that they were sent to escort.  The Japanese fighter planes were Nakajima A1N1 types, a white biplane with red tail band, red tail, and large red Japanese insignia.  Seeing the defending fighters, Short flew directly into the teeth of the enemy bomber formation anyway.  He fired his weapons at the lead bomber.  His aim was true and he killed the leader of the bomber force, Lt. Kotani, IJN, even if he did not shoot down the plane. 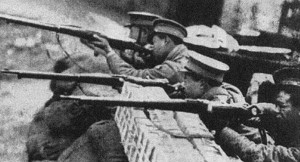 Chinese military police at barricades defending Shanghai during the 1932 conflict.

The lead Japanese bomber’s copilot took over and turned the bombers away, abandoning the attack even as the three Japanese fighters closed on Short’s Boeing biplane, boxing him in.  Even then, Robert Short circled back to attack the bombers again, hoping to drive them completely off and down at least one or two.  It was a dark moment and Short’s plane was being closely tailed by a Japanese fighter flown by Lt. Ikuta.  Closing the distance as Short began yet another attack, Lt. Ikuta fired on Short’s biplane.  His aim was true and Short’s Boeing fighter caught fire and then spun in to crash in flames in full view of the Chinese city and refugees at the station.

The battle overhead had been at low altitude and had lasted nearly two minutes before Short was shot down and killed.  Thousands had witnessed the brave defense of Suzhou Station, and hundreds of Chinese refugees had been undoubtedly saved.  The bombers had been forced to abandon their attack, leaving the refugees untouched.  The three fighters escorted the bombers back as the lead bomber carried the lifeless body of raid’s leader home.  For the Chinese, it had been an astonishing scene to have witnessed — an American volunteer who entered into combat against a vastly superior force and who had given his life to save hundreds of refugees.  They had seen a foreigner come and intervene in a war that had witnessed untold carnage and one who had selflessly fought on their behalf, saving hundreds of lives in the process. 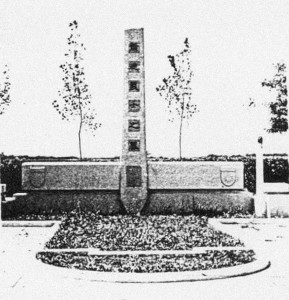 The cenotaph memorial that once stood at Hongqiao Aerodrome, Shanghai, in honor of Robert Short’s bravery and sacrifice for China; it is likely long gone today.

The Chinese government and people chose to bury Robert Short with full honors befitting a true hero.  His mother, Elizabeth Short, and his brother, Edmund Short (they resided at 809 South 39th Street, Tacoma, Washington, USA), were brought over from America to attend the funeral.  It took over a month of travel by boat to arrive in China.  A monument was erected to Robert Short’s memory in Shanghai and a thankful Chinese government and people showed their gratitude for a single man who was willing to face down the threat of Imperial Japan — above and beyond the call of duty in every respect.  It was a sacrifice that had touched the very heart of the Chinese people.

At the funeral, one Chinese speaker, T. V. Soong, summed up China’s appreciation with these words, “During the darkest hour of China’s desperate defense, Robert Short, a friend from a distant land, flew out of the sky and gave his life….  To the Chinese people this act of courage and sacrifice was electrifying.”  In appreciation, the Chinese government posthumously was commissioned a Colonel in the Chinese military military. 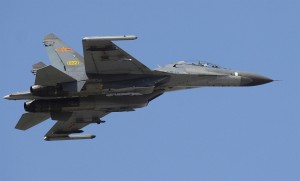 Robert Short’s sacrifice would not be the only one made by America on behalf of China in its greatest hour of need.  In the years to come, dozens more Americans would come, including most famously those comprising the American Volunteer Group (AVG, known as the Flying Tigers).  With the entry of the USA into World War II, thousands more Americans followed into China, flying supply missions across the “Hump”, undertaking combat fighter interceptions against the Japanese and ultimately even launching bombing missions against mainland Japan from Chinese soil as the tide turned in the Pacific.  Yet all of these men would come in the footsteps of one man, Robert Short — and when those who came later arrived in China, they found that they had very large shoes to fill.  Robert Short’s example of personal bravery and sacrifice had inspired an entire nation — and he had become the first American aviator lost in the war against Imperial Japan.

Robert Short’s Boeing P-12 Prototype before its battles in China.

As we look back on the last eight decades of US-Chinese relations, it is astonishing to think that the good will and extraordinary assistance provided by America all those years ago is largely unknown among the Chinese people themselves today.  Perhaps, despite the rivalries and international uncertainties that define our relationships today, there can be a positive result from these stories of long forgotten American aid to China — aid that was given at a time when that nation faced grave dangers from a terrible enemy.

From the ashes of memory, a newly resurgent China can look beyond its strategic goals and raw international political dictates to take a moment to reflect on a different trust, one that quietly whispers from across the generations to today and speaks volumes about the true nature of America and the American people.  Or will we see something else instead, as China emerges not as a force for peace but as the new imperial power of the Pacific and Asian world?  Only time will tell.

The Nakajima A1N1 — this one shown having participated in the Shanghai Incident of 1932, during which Robert Short was shot down.

The Japanese Navy officer, Lieutenant Ikuta, who had tailed and then shot down Robert Short that day over Suzhou Station, survived his combat tour in China and subsequently survived World War II, against all odds.  In the 1960s, he tracked down the family of Robert Short and, with great remorse, paid a visit of apology.  Incredibly, he met the aging mother of Robert Short, Mrs. Elizabeth Short, and came to her home.  There, on behalf of the all Japanese, he expressed his personal regret for the once Imperial Japan and its aggressive policies of the 1930s and 1940s.  He also begged her forgiveness for that day and stated that he had lived a life of regret and sadness as a result.  In shooting down Robert Short, even then, he told her, he had recognized a courage that was rare in all men.  He deeply regretted that he had taken her son’s life, even in war.  Acts of honor like those of Lt. Ikuta are equally rare in today’s world.  His words were welcomed and his apology accepted.

The American Volunteer Group (Flying Tigers) scored very well against the numerically superior Japanese air power over China.  What was the kill-ratio achieved by the Flying Tigers and how many aces were made in the defense of China against Japanese aggression.


I live and work in Suzhou. One of my colleagues has posted a social media message saying that he has visited a memorial to Robert Short, and reports that there is also a statue. I think the memorial may be the one that was originally in Shanghai.


Mike, is there any chance that you can get your colleague to return and take some photos for us to publish? Very interesting! Thank you!